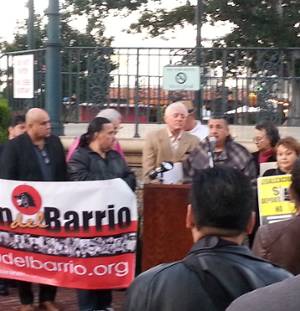 About 100 people gathered at a press conference Feb. 23 in Los Angeles to announce a mega-march in that city and a national general strike on May 1. The conference was held at the historic Placita Olvera in downtown Los Angeles under the slogans: “The People vs. Trump!” “A Day Without an (Im)migrant!” and “No Ban! No Wall! Sanctuary for ALL.”

The press conference was a great show of unity. All the founders of the historic March 25 and May 1 actions of 2006 that brought over 1 million people out in the streets were there. It also included many of the organizations that have fought for immigrant rights since 2006.

Speakers at the conference were a mix of voices from moderate to militant, united against Trump, racism and the anti-immigrant, anti-Muslim and anti-women agendas of his administration. The LA Resistance Coalition, which has helped organize the large protests against Trump here in L.A. and includes many who were involved in the Bernie Sanders campaign, was also present, as was the Filipino organization BAYAN-USA.