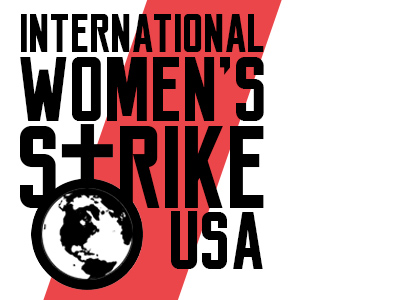 Women who took to the streets Jan. 21 in the U.S. and around the world in a massive show of solidarity and resistance against President Trump’s anti-woman agenda have been asking: Where do we go from here?

A bold call for women in the U.S. to join a global women’s strike on International Women’s Day, March 8, provided the answer. The call, issued on Feb. 6, was initiated by a diverse group of eight politically active women in the U.S., including Angela Davis and Rasmea Yousef Odeh. It praised the new wave of militant feminist struggle. But they made it crystal clear it cannot be based on so-called “corporate feminism.” It must be inclusive, “feminism for the 99%.” (guardian.co.uk)

The statement noted: “[I]t is not enough to oppose Trump and his aggressively misogynistic, homophobic, transphobic and racist policies. … Women’s conditions of life, especially those of women of color and of working, unemployed and migrant women, have steadily deteriorated over the last 30 years.”

The call then cited recent struggles for women’s rights around the world: in Poland against the abortion ban, in Latin America against male violence, in Italy for labor rights and in south Korea and Ireland in defense of reproductive rights. “Together, they herald a new international feminist movement with an expanded agenda: at once anti-racist, anti-imperialist, anti-heterosexist and anti-neoliberal.”

Urging women in the U.S. to join with feminist groups in at least 30 countries who are already organizing the strike, the statement declared: “The idea is to mobilize women, including trans women, and all who support them in an international day of struggle — a day of striking, marching, blocking roads, bridges, and squares, abstaining from domestic, care and sex work, boycotting, calling out misogynistic politicians and companies, striking in educational institutions.”

Organizing in the U.S.

Progressive women in the U.S. eagerly responded to the call. Posted on womenstrikeus.org is the strike platform: “In a spirit of solidarity and internationalism, in the United States, March 8 will be a day of action organized by and for women who have been marginalized and silenced by decades of neoliberalism directed toward working women, women of color, Native women, disabled women, immigrant women, Muslim women, lesbian, queer and trans women. … [We are organizing] resistance not just against Trump and his misogynist policies, but also against the conditions that produced Trump, namely the decades-long economic inequality, racial and sexual violence, and imperial wars abroad.”

The platform lists six “common principles”: an end to gender violence both domestic and institutional; reproductive justice for all, cis and trans; labor rights, including equal pay that adequately provides for families; full “social provisioning,” including universal health care, adequate Social Security and free education for all; for an anti-racist and anti-imperialist feminism, which supports all struggles against police brutality and mass incarceration; and environmental justice for all that seeks to end profits before people.

Though the call was issued only a month before the strike, groups from coast to coast have started meeting and organizing. About 35 groups are already listed on the website, along with the endorsement of the J21 Women’s March on Washington.

In New York City students at the New School have been holding planning meetings to shut down the college. More than 100 young activists met in Brooklyn on Feb. 18 and announced a rally at Washington Square Park at 4:00 p.m., with a march at 5:00 p.m. The route will pass various landmarks including the Triangle Shirtwaist Fire site, where 146 mostly young immigrant women died in 1911; Stonewall Inn, where the fight for LGBTQ rights was elevated in 1969; and the offices of Wall Street icon Goldman Sachs. The march will end at Zuccotti Park, the 2011 site of the anti-capitalist Occupy Wall Street encampment.

In Baltimore the newly organized Women’s Fightback Network has issued a call under the banner of “Women Unite to Fightback.” They are urging women to call in sick to their jobs, don’t go to school and don’t shop. An inclusive rally will start at 3:00 p.m. at the People’s Park, where speakers will address ending racism, sexism, LGBTQ bigotry, all forms of inequality and injustice and demand workers’ and immigrant rights. Activists will then march to the women’s jail to show support for the incarcerated women and call for an end to the prison-industrial complex. Then they will march to the Douglass Houses, where organizers will discuss their efforts to stop the privatization of public housing.

While the International Working Women’s Day Coalition in New York City plans to participate in the March 8 strike, the group will also continue its yearly tradition of holding a street meeting and an organizing roundtable luncheon, scheduled this year for March 11. Uniting many diverse, multinational, multigenerational progressive women’s groups in New York under the banner “Women in Rebellion: To Resist Is Justified,” the IWWD Coalition will gather at noon in the bustling shopping area of Herald Square. Among their targets will be fast food restaurants, where many working women of color are fighting for $15 and a union.

After a march down Seventh Avenue past other targets, the activists will gather at a hall at 135 W. 23rd St. for the roundtable luncheon. Speakers from different groups will share their organizing goals, their victories and setbacks, and the lessons they have learned, along with how Trump has ignited their activism. The event is designed to promote the program, which includes demands for union jobs with equal pay; quality, affordable housing; free health care and education for all; the right to reproductive justice, including paid maternity and family medical leave; and an end to racism towards Muslim, Indigenous, Latinx, African American, Arab and Asian women; anti-LGBTQ bigotry; and sexual abuse and violence. Go to Facebook/International Working Women’s Coalition for more information.