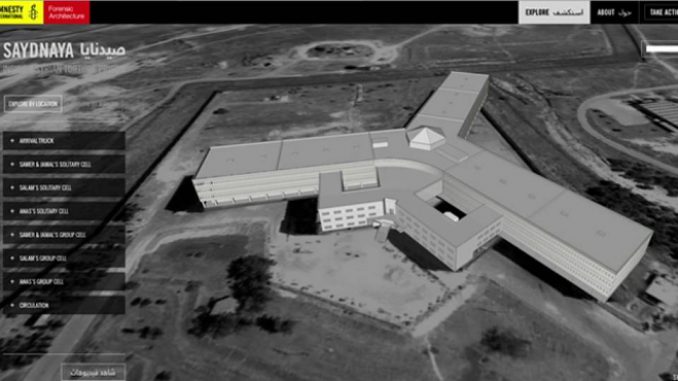 Amnesty International admits that since no photos, videos or concrete testimony exist of Saydnaya Prison, they fabricated entirely in London what they are sure is happening in Syria.

Amnesty International released a 48-page report on Feb. 6 to wide publicity and commentary from U.N. officials and U.S. politicians.

The report, explosively titled “Human Slaughterhouse: Mass Hangings and Extermination at Saydnaya Prison, Syria,” claims that attacks by the Syrian government on civilians are part of its systemic state policy.

The report has now been thoroughly debunked as fraud and calculated U.S. war propaganda. The Syria Solidarity Network forces in the Hands Off Syria Coalition and other antiwar researchers have exposed glaring fabrications.

But these exposés have received no coverage in the corporate media.

The impetus of antiwar forces to immediately scrutinize this latest report was based on the well-known role, at pivotal historical moments, of earlier AI and Human Rights Watch reports on Iraq, Libya, Yugoslavia, Iran, Sudan, Cuba and Venezuela. All too often these reports appear to be coordinated with U.S. war plans. They are quoted to justify U.S. plans to intensify sanctions or blockades.

These war crime charges become the excuse for intervention and war against an entire population. In Iraq, Yugoslavia and Libya they became the justification for tearing down the entire government structure, its protective legislation and nationalized industry, and the kidnapping and execution of the top leadership.

The newest AI report was followed days later by a CNN news report that the U.S. Defense Department might be sending ground combat forces into northern Syria.

Its release also came after the Syrian government had made significant gains against the U.S.-orchestrated effort to overthrow it and less than two weeks before the next round of peace talks in Geneva. Is that a coincidence?

The role of these “human rights” reports raises a larger issue. Well-funded nongovernmental organizations play a major role in U.S. war plans. Although these NGOs claim to be “independent,” they are well-funded by imperialist governments through the U.S. Agency for International Development and the British Foreign Office. Foundations that represent powerful U.S. corporations, such as Ford, Rockefeller and Soros, are major donors.

Both AI and HRW assert that their reports are impartial, fact based, balanced to include testimony from both sides and that all sources are thoroughly checked and cross-checked. But the very title of the latest Syria report, with the words “slaughterhouse” and “extermination,” exposes the claim of impartiality as a lie.

The Pentagon war machine can hardly claim that its wars are based on self-defense. So finding “evidence” to justify each war is politically necessary.

The total systematic demonization of the targeted government and its leaders by NGOs, then by the corporate media and next by other funded media is a way of disorienting, silencing and overwhelming domestic opposition.

This demonization has become a mainstay of each war. It is an effort to put the criminal U.S. intervention beyond debate.

These NGOs are often referred to as “soft power” tools of U.S. policy. While they produce hundreds of reports on human rights and political prisoners that help establish their credibility and gain a sincere following, a few key reports, crucial to U.S. war plans, are released with great fanfare.

In both Democratic and Republican administrations, these politicized reports are the most powerful form of war propaganda.

Much to the frustration of U.S. policy makers, U.S. war crimes are well known and have been extensively documented with video and photo images. Consider the U.N. reports on the impact of starvation sanctions and Chelsea Manning’s courageous release to WikiLeaks of thousands of video images, diplomatic cables and suppressed reports of U.S. crimes in Iraq. Horrific images also came from U.S. prison guards, who traded and posted online photos of torture, humiliation and abuse at the U.S. Army Detention Center at Abu Ghraib, Iraq.

It is essential to paper over those searing images of U.S. war crimes by creating charges that the countries targeted for destruction are guilty of even more horrendous crimes.

Amnesty International admits that since no photos, videos or concrete testimony exist of Saydnaya Prison, they were forced to devise “unique ways with interactive 3D models and digital technology, animations and audio software” to fabricate entirely in London what they are sure is happening in Syria. The graphic “evidence” in their report was all crafted by a team of architects, filmmakers and special effects designers in a company called Forensic Architecture.

The wide range in the number of prisoners they claim were executed at Saydnaya Prison — from 5,000 to 13,000 — is based on hearsay of anonymous people living outside of Syria. Evidence was also provided by totally discredited organizations such as the Syrian Observatory for Human Rights. This notorious one-man operation is run by Rami Abdul Rahman from his clothing shop in Coventry, Britain.

Of course, this report and earlier AI reports on Syria make no mention of the U.S. role in funding and arming tens of thousands of mercenary and opposition forces. There is no condemnation of the impact of two years of U.S. bombing in Syria.

This report is not much different from the totally fraudulent report AI verified and helped to promote on Oct. 10, 1990, to fire up the first U.S. war on Iraq. Claiming to be a Kuwaiti nurse, a young woman identified only as Nayirah testified before the Congressional Human Rights Caucus. She claimed to have witnessed Iraqi soldiers tear hundreds of babies from hospital incubators and leave them “scattered like firewood across the floor” at Kuwait City Maternity Hospital. It turned out the woman giving testimony was the daughter of the Kuwaiti ambassador in Washington, D.C., and had not actually been in Kuwait.

After the report had been thoroughly exposed and after the destruction of Iraq, AI quietly issued another report stating they had found no evidence for the incubator claims.

Amnesty International played the same role lending credibility to reports that Col. Muammar Gadhafi was using mercenaries to kill peacefully protesting civilians in Libya. Later, after the brutal lynching of Gadhafi and the U.S. war had destroyed the country, AI issued a report refuting the accusations.

Both AI and HRW reports also gave great credibility to reports of war crimes and genocide in Yugoslavia in 1999. The reports justified the U.S. bombing, dismemberment and occupation of Yugoslavia and the kidnapping of Yugoslav President Slobodan Milošević, who was charged with war crimes in a trial at The Hague. The International Criminal Tribunal exonerated Milosevic of the charges this August — a decade after his mysterious death in custody.

After each war, the vicious propaganda that overwhelmed all political discourse is quickly swept aside.

U.S. war propaganda has become even more sophisticated. The best example is a U.S.- and British-funded organization, set up by British mercenary James Le Mesurier, of supposed Syrian “first responders” called the White Helmets. An international publicity campaign promoting these “angels on the front line” was rolled out in 2012.

In front of the camera, the White Helmets desperately demanded increased U.S. intervention, safe zones and no-fly zones in Syria. They have been nominated for the Nobel Peace Prize. A documentary praising them premiered at film festivals in 2016 and is nominated for an Oscar.

U.S. war propaganda focuses on distorting every form of resistance and defense. The U.S. brags of its powerful weapons, from bunker busters to radioactive depleted uranium, napalm, white phosphorous and millions of anti-personnel, razor-shredding cluster bombs. U.S. drones openly circle entire countries, striking at will. Massive destruction is flaunted by terms like “shock and awe.”

Yet the only weapons denounced as inhumane are rather simple explosives, such as barrel bombs, supposedly used by the Syrian government, or roadside explosives used by resistance forces.

The continued level of war propaganda demonizing Syria means the threat of a rapidly expanded war is a real and present danger. Exposing and rejecting all propaganda designed to justify the criminal role of the U.S. in Syria must continue as a priority.