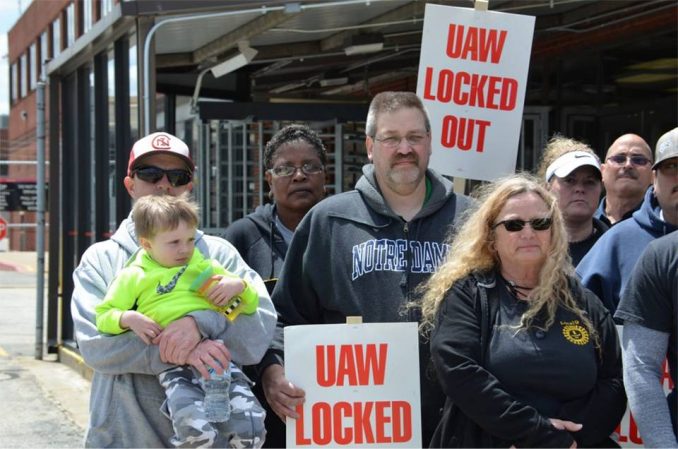 Starting in mid-March, all locked-out Honeywell workers will be returning to work. Members of United Auto Workers Local 9 in South Bend, Ind., and Local 1508 in Green Island, N.Y., voted to ratify a new contract on Feb. 25. They had maintained  round-the-clock picketing since May 9, when Honeywell bosses walked them out of the plant in the wee hours of the morning and locked the gates.

This new contract pushed back some of the worst terms  Honeywell was demanding the union concede. The workers voted to reject these terms two days before the May lockout. They rejected the same contract again in November, even though by then the workers had nearly run out of state unemployment benefits.

The company’s original proposal would have allowed management to deny workers their shift preference and force them out on layoff without regard to seniority. The company could also have arbitrarily and unilaterally cut health benefits and made other changes to the contract without negotiating with the UAW. This language was taken out of the ratified agreement.

“We want to thank our members and their families for their sacrifice and solidarity during a difficult year,” said Local 9 President Todd Treder, “and for all of the support our local communities and brothers and sisters from the UAW and labor across the country have given us.” (uaw.org)

While the Green Island local overwhelmingly approved the new contract, in South Bend the contract passed by only a slim majority. Workers are still unhappy about increased out-of-pocket health care costs that, for some, amount to a significant pay cut.

Another issue is the elimination of being paid time-and-a-half — 50 percent more than the regular hourly wage — for time worked after eight hours in a single day. Now workers must work more than 40 hours a week — what the Fair Labor Standards Act already mandates for even non-union workers — to collect premium pay.

The UAW conceded this point on overtime pay at Ford, General Motors and Chrysler during the 2009 bankruptcies. This earlier concession has made it hard for other UAW locals to hold onto language that insists workers receive premium pay after an eight-hour day.