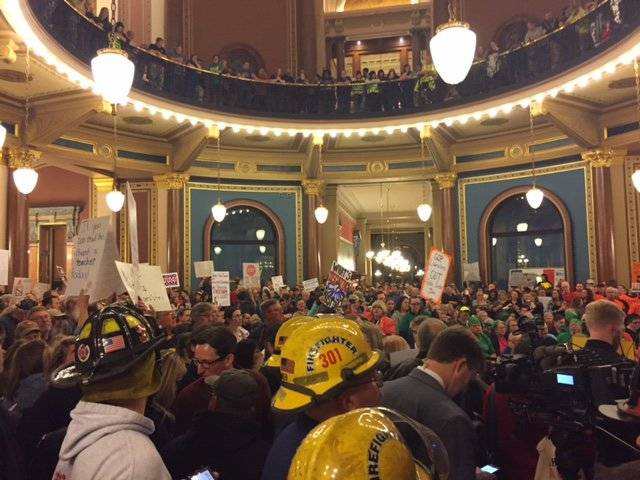 Des Moines, Iowa – Iowa workers are fighting to save the collective bargaining rights of public sector employees after Gov. Terry Branstad signed an anti-union bill into law on Feb. 17 despite a public outcry against it.

Republican legislators, who dominate every branch of state government, have declared war against workers in the Hawkeye State with a slew of bills aimed against organized labor. Plotting behind closed doors, they introduced legislation on Feb. 7 aimed at destroying the bargaining rights of over 184,000 public employees, previously protected under the Iowa Public Employment Relations Act.

House File 291 quickly passed by a vote of 53 to 47 in the House and 29 to 21 in the Senate. In blitzkrieg style, it took Gov. Branstad just 10 days to enact it into law. Lt. Gov. Kim Reynolds, who will take over for Branstad when he leaves office to become the new U.S. Ambassador to China, also supports the union-busting law.

The Center for Worker Justice of Eastern Iowa sent representatives from Iowa City to Des Moines to protest the changes and stand in solidarity with the workers during the legislative debate and the public hearings. In a public statement, CWJ noted that the law “removes civil service protections established in the early 1900s to prevent nepotism and corruption,” adding that it is “devastating to our state, our workers, and our public services.”

The new law strips away worker protections that have been on the books for over 40 years, since their signing in 1974. With the exception of negotiating base wages, the new law prohibits unions from discussing a multitude of issues, including health insurance and working conditions.

Workers can now be fired without just cause, union dues can no longer be deducted from payrolls, and it will be more difficult to raise union funds. This law will help pave the way for dismantling public sector unions as well as attacking unions in the private sector.

Iowa AFL-CIO President Ken Sagar has said, “This bill will mean that workers, like teachers and nurses, would not be able to speak for themselves to make sure they’re safe on the job.” He called it “just another attack on working people by extremist lawmakers and their wealthy campaign donors.” In other public statements, the Iowa AFL-CIO has called provisions of the bill “worse than Wisconsin” or “Wisconsin on steroids.”

Just as with Wisconsin, GOP legislators were heavily influenced by right-wing think tanks such as Americans for Prosperity and such groups as  the American Legislative Exchange Council. Before the law passed, Wisconsin Gov. Scott Walker, who conspired with fellow Republicans to pass similar measures in his state in 2011, communicated with Iowa GOP legislators during a caucus meeting while ignoring their constituents.

The Iowa GOP, steadfastly aligned with the reactionary policies of President Donald Trump, is not showing any signs of slowing down its assault on workers. Iowa workers are vowing not to back down in the fight to save collective bargaining, which is just another battle in the class war being waged in the state.

Thousands of Iowans have been storming the state Capitol building in Des Moines. Crowds have been showing up to local legislative public forums in record numbers across the state to show their opposition to these anti-worker assaults. An audience at the Statehouse chanted “Kill the Bill” during a Feb. 14 hearing, displaying the raw emotions of those to be hit hardest by HF 291.

On Feb. 20, the American Federation of State, County and Municipal Employees in Iowa filed a lawsuit against HF 291 even as the Polk County District Court challenged the constitutionality of the law.

“We didn’t start this fight,” Sagar is quoted as saying by the Cedar Rapids Gazette. “We did not want this fight, but we will not give up on this fight for the rights and lives of working Iowans.” (Feb. 16)