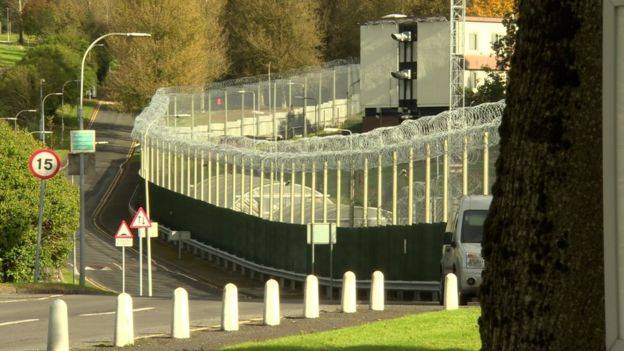 On July 6, 2013, while on vacation in Belfast, in the northern six counties of British-occupied Ireland, I visited a female political prisoner for her birthday and wound up arrested under Section 41(b) of the 2000 UK Terrorism Act, not knowing when or if I’d ever get out.

The prisoner was held in Hydebank jail on suspicion of trying to assassinate two police officers in May. Though we were allotted two hours to visit, the administration stopped the meeting short and escorted me to the visitors area. There they arrested me.

I was in complete shock. My first thought was “I’m fxcked.” The Police Service of Northern Ireland confiscated my phone, camera and other belongings. I was handcuffed and taken to the parking lot, where I was put in a car with three PSNI officers.

One male officer sat in the back with me and asked my name. After screaming at me, he thrust his weight against me, pinning me against the door in a painful position. He then radioed to the arresting officer that I was not complying.

The male officer told the female officer to take a detour to jail. As we drove, I looked out the window, mesmerized by the flowering green Antrim fields. I was thinking about how I was going to be fired from my job and how upset my parents would be at the news.

The detour the PSNI took was through Glengormley, a loyalist estate adorned with Ulster Volunteer Force murals. This would be the equivalent of U.S. police driving a Black person through a KKK-controlled community. While driving past the murals, the driver slowed, as if to say, “We could drop you out here and nobody would ever know.”

We approached Antrim Police Station, a massive structure complete with razor wire, outdated cameras on every corner, and an impenetrably high fence. No way out. A portly guard, former member of the hated Royal Ulster Constabulary, asked if I wanted to wear a handsome blue jumper.

“I’ve done nothing wrong and insist on wearing my own clothes!” I replied. He nodded his head and told me he would let the person in charge know.

A few moments later I met the man in charge, who sat behind a desk, and a bald prison guard who had UVF tattoos on his arms and wore purple gloves. “Because you insist on wearing your own clothes, we will administer a full search, for security purposes,” the man said.

The guard said, “Take off your shoes. Take off your shirt. Take off your pants.” I was paralyzed with fear and sweating profusely that hot summer day. The man behind the desk just stared down at the table as the guard violated me and probed my body.

“Do you want his knickers off?” the guard asked.

“No, that’s enough.” Humiliated, scared and enraged, I just wanted to get out of there.

I took the lawyer the political prisoner’s mother arranged. The guard put me in a small cell, with frosted windows which didn’t let in much light, a single toilet, a foam mattress, a soiled blanket, a sink (which you also drank from) and a green camera in the light fixture that monitors your every move. The cell is also equipped with an emergency call fixture, which was routinely ignored.

My lawyer finally arrived. Shocked by his apparent youth, I was still impressed by his wit and knowledge of law. When he said the room was bugged and they could be listening, I felt panic.

The PSNI employed a four-stage interrogation process. Little by little, they produced more evidence against you. I was shaking as one of the guards guided us to the interrogation room. Two detective constables, one male and one female, played the old “good cop/bad cop” routine.

Each interrogation session lasted around 45 minutes. I answered, “No comment,” to each of the questions.

That night two Special Branch officers woke me, offering a plane flight home if I cooperated. I said, “Get the fxck out of my cell and to call my lawyer.” They smirked and left. I never saw them again.

Historically, Irish political prisoners face the Five Techniques: wall standing, hooding, white noise, deprivation of food and drink, deprivation of sleep. I was subjected to three of the five techniques during my nine days in solitary confinement. I was locked up 23 hours a day and only let out for interrogation, showering and to see the doctor.

The first time I showered, one of the male guards watched as I undressed and cleaned myself, psychological abuse he compounded by making degrading remarks about my body.

Every hour on the hour a guard, usually female, would wake me, allegedly to check on me, turning the lights on and opening the door. To keep me from falling back asleep, the heat would be turned way up or the air turned on blast. White noise was common, with buzzing through the vents. Later guards banged on the cell door next to mine. I heard a woman scream — a scream I thought was from a real person until years later during therapy.

I lost nine pounds in nine days. Guards always told me the canteen was closed. My second lawyer brought in food so I could eat, but guards confiscated it when he left. These tactics aimed to break me — they failed!

Between interrogations and bed, I read constantly, about legendary Belfast soccer player George Best, mixed martial arts and “The Sands of Time,” a book about the Basque national liberation organization fighting French and Spanish imperialism.

Phone calls from my uncle Pat helped, too. Pat was a lawyer who set me up with the second lawyer (the first worked for the firm representing the female POW I visited — a conflict of interest). Pat’s skills helped secure my release. His humor on phone calls (monitored by the PSNI) became a form of release as he joked about the IRA — to the annoyance of the police.

In solitary, time creeps as you have nothing but time to think. I often thought about my girlfriend, parents, dogs and comrades. The PSNI wanted to charge me with conspiracy, IRA membership and material support for terrorism — I thought they would accept anything that would hold me longer.

I’d studied Irish history and knew of Bobby Sands’s suffering — he was the leader of the 1981 Hunger Strike who, along with nine of his comrades, died so that all political prisoners would live with dignity inside British dungeons — and the 1973 force feeding of two IRA sisters, Marian and Dolours Price, in England. So I knew I would have been ill equipped to deal with psychological torture.

A seizure on my final day in jail sent me to the hospital. Two armed PSNI men watched me at all times, even in the restroom. They too would mock me and asked if I wanted food. When I was taken back to the jail, I was informed I was being released.

As I saw the PSNI erase my name from the whiteboard, I was elated. I was alone in a room with a portly cop, who told me I was lucky: “Back in the old days, kids like you used to mysteriously disappear.”

My lawyer took me to a safe house where I met my uncle Pat, who had flown all the way to Belfast to retrieve me. We embraced and I cried. It was good to be free.

With freedom comes responsibility. This traumatic experience reinforced my outlook on the Irish liberation struggle and the struggle to support all imprisoned people. Only an Ireland free of British imperialism and European Union economic colonialism can truly be independent. This means all 32 counties reunited under a socialist banner with worker control in every sphere of life.