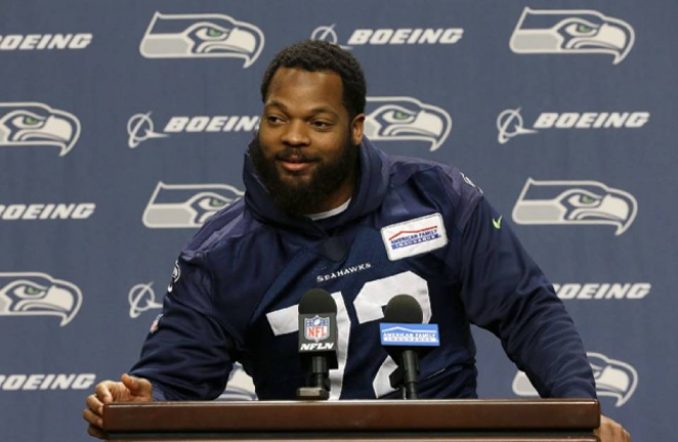 Bulletin:  According to the Times of Israel, six out of the 11 National Football League players slated to visit Israel for a public relations tour, have boycott the trip. (Feb. 15) Besides Seattle Seahawk Michael Bennett, who wrote an open letter below on why he repudiated the trip and Miami Dolphin Kenny Stills, the other four players are Seahawk Cliff Avril, New England Patriot Martellus Bennett, San Francisco 49er Carlos Hyde, Denver Bronco Justin Forsett and former linebacker Kirk Morrison.

Michael Bennett, a defensive end with the National Football League’s Seattle Seahawks, posted this statement on his Instagram and Twitter accounts on Feb. 10.  Since this statement was released, two other NFL players, the Denver Broncos’ Justin Forsett and the Miami Dolphins’ Kenny Stills, stated they were withdrawing from the trip to Israel. Colin Kaepernick praised the stance taken by these athletes, coming on the heels of an open letter posted Feb. 9 on thenation.com signed by Alice Walker, Angela Davis, John Carlos, Harry Belafonte and others, which appealed to the NFL to cancel this trip in protest of the racist treatment of the Palestinian people under Zionism.

I was scheduled to make a visit to Israel with fellow NFL players.  I was excited to see this remarkable and historic part of the world with my own eyes.  I was not aware, until reading [the Feb. 5] article about the trip in the Times of Israel, that my itinerary was being constructed by the Israeli government for the purposes of making me, in the words of a government official, an “influencer and opinion-former” who would then be an “ambassador of goodwill.”  I will not be used in such a manner.  When I do go to Israel — and I do plan to go — it will be not only to see Israel but also the West Bank and Gaza so I can see how the Palestinians, who have called this land home for thousands of years, live their lives.

I know this will anger some people and inspire others. But please know I did this not for you, but to be in accord with my own values and my own conscience.  Like 1968 Olympian John Carlos always says, “There is no partial commitment to justice. You are either in or you’re out.” Well, I’m in.