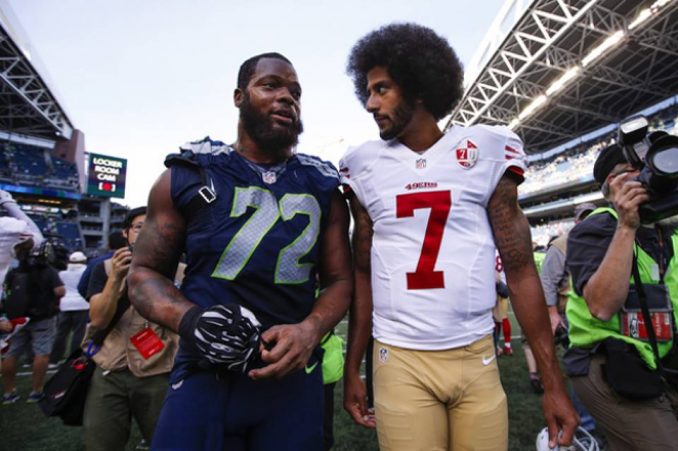 Michael Bennett and Colin Kaepernick talk together after a game between their opposing teams, the Seattle Seahawks and the San Francisco Forty-Niners.

The ongoing uprising in the streets against the Trump presidency continues to galvanize various sectors of U.S. society, including sports and mass culture, not always known for social activism. For instance, National Basketball Association coaches Gregg Popovich, Steve Kerr and Stan Van Gundy, all white, have been the most outspoken critics among their peers of Trump’s racist, anti-immigrant, misogynistic views, even more since Trump’s win on Nov. 8. All three of their teams — the San Antonio Spurs, Golden State Warriors and Detroit Pistons, respectively — have majority African-American and non-U.S.-born players.

When Kevin Plank, the CEO of the multibillion-dollar sport corporation Under Armour, attended a Feb. 7 business meeting at the White House with Trump and then commented that Trump was an “asset” to the country, Stephen Curry, the NBA’s reigning most valuable player, who has one of UA’s biggest sponsorship deals, took issue with Plank’s statement. When asked by the San Jose Mercury News to respond to Plank’s “asset” view of Trump, Curry, who is African-American, answered, “I agree with that description, if you remove the ‘et.’” (Feb. 9)

Plank’s connection with Trump and the rebuttals from Curry and Copeland helped to spark a firestorm on Twitter with #boycottUnderArmour.  Plank then attempted to distance himself from Trump by saying that he didn’t agree with Trump’s “social views.”

Neither Curry nor Copeland backed down from their stance. Curry, who is under contract with UA until 2024, went on to say, “There is no amount of money, there is no platform I wouldn’t jump off, if it wasn’t in line with who I am.” (New York Times, Feb. 8)

Praising his players for speaking out on social issues, Kerr, Curry’s coach, has publicly supported the activism currently taking place around the country, especially those protesting attacks on Muslims.

Since the 1920s, sports teams that have won national championships, whether amateur or professional, have visited the White House for a photo-op with the current president. Rarely has there been a time when groups of players from championship teams boycotted these visits based on openly opposing political views. That is, until now.

Six members of the New England Patriots, who recently won Super Bowl LI, stated they will boycott going to the White House to celebrate their victory with Trump. The six players are Martellus Bennett, Devin McCourty, Dont’a Hightower, Alan Branch, LeGarrette Blount and Chris Long. Bennett is the brother of Seattle Seahawks’ Michael Bennett, who recently refused to go to Israel with other players out of concern for the plight of Palestinians.

McCourty stated on Feb. 6, the day after winning the Super Bowl, “I don’t feel accepted in the White House.” He added, “With the president having so many strong opinions and prejudices, I believe certain people might feel accepted there while others won’t.” (www.bet.com, Feb. 10)

Long is the only white player to refuse to meet Trump, the other five being African American. In fact, when San Francisco 49ers quarterback Colin Kaepernick started his protest against systemic racism and oppression last fall by kneeling during the national anthem, Long came out in support of Kaepernick’s position, the only white NFL player to do so.

The fact that these six Patriots have taken such a principled position against Trump is significant since Patriots owner Robert Kraft, coach Bill Belichick and quarterback Tom Brady have maintained personal relations with Trump in the past, and continue to do so.

The ongoing mass protest against Trump and everything he stands for will continue to motivate more and more athletes, whether high profile or not, to become more and more socially conscious and active.