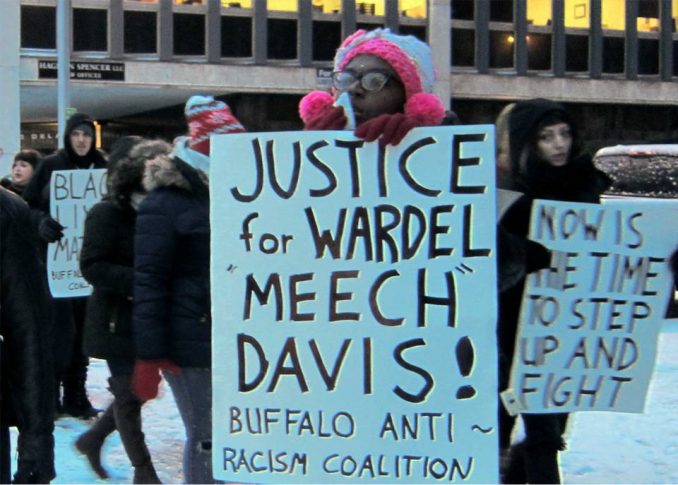 Buffalo, N.Y. – On the night of Feb. 7,  a 20-year-old unarmed Black man named Wardel “Meech” Davis was killed by Buffalo police. He died while they were arresting him, apparently for trying to leave while they were stopping him for “looking suspicious.” This accusation is commonly and widely used by racist profiling cops throughout the country. The cops involved were put on paid leave.

The next night, a crowd gathered at the street corner where Davis was killed, anti-racist activists and neighbors alike, who were called together at the urging of his friends and family.

The following night, Feb. 9, a huge crowd of people, including activists representing many organizations, shut down the high-traffic intersection on Main Street outside a Buffalo Police Department precinct station.

The crowd blocked the intersection for over an hour, led by loved ones of Meech calling for an end to racist police murders.

On Feb. 10, for a third night, a rally assembled downtown, targeting a hotel where the mayor of Buffalo was having a party. The crowd marched and chanted for an hour, demanding answers from the mayor — while guests arrived — and then marched back to the police precinct.

The local medical examiner reported that he had found “no cause of death” for Davis. Previously the medical examiner had said that an inmate murdered by guards in Buffalo’s notorious Holding Center died of a heart attack — until that was finally proven to be a lie.

“Authorities” say it will be many weeks before there might be more answers.  News outlets are twisting what little information is available to paint Wardel “Meech” Davis as a villain.

We in Buffalo won’t stand for it! We demand the truth! We say, like the protesters chanted, “Justice for Meech! Or shut it down!”