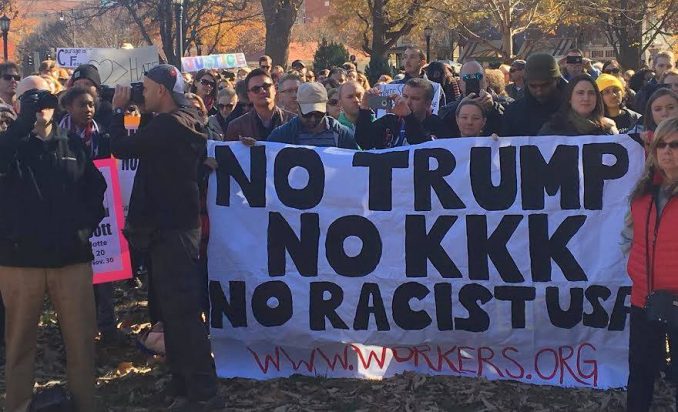 Feb. 13 — “Alt-right” has become a buzzword in the mainstream media to describe the extreme right-wing politics pushed by far-right bigots like Milo Yiannopoulos, Richard Spencer and Steve Bannon. What do the term and its mouthpieces really represent?

Milo Yiannopoulos, an openly racist gay man who is known for harassing women and people of color on Twitter (from which he was eventually banned), is frequently identified as a major spokesperson for the “alt-right.” Milo is known for espousing bigoted, anti-Muslim, anti-immigrant and anti-trans views as a prominent journalist for Breitbart News, a far-right publication. The site was launched in 2007 by conservative writer Andrew Breitbart as a pro-capitalist, pro-Israeli, apartheid news outlet.

In recent weeks, Yiannopoulos has conducted a speaking tour across U.S. universities to campaign against the Sanctuary Campus movement. However, his anti-Muslim, anti-immigrant events were met with resistance when protesters shut them down at the University of California, Davis and UC, Berkeley.

Richard Spencer, a more obscure right-wing demagogue, coined the term alt-right in 2010. Spencer leads the National Policy Institute, a white-supremacist think tank. He was in the spotlight after the most recent NPI national conference shortly after the election, when he proclaimed, “Hail Trump, hail our people, hail victory!” as audience members gave Nazi salutes.

Spencer and his followers say that a “White European ethno-state” should be created within the U.S. in order to “protect” white people from “multiculturalism.” These “white nationalists” — a phrase which always means “white supremacists” — see political, cultural and economic autonomy for people of color as a fundamental threat. Spencer was again in the public eye during the inaugural weekend when a heroic anti-fascist protester smacked him down as he was being interviewed.

Steve Bannon is the most publicized figure associated with the “alt-right.” Once an investment banker at Goldman Sachs and then an executive producer in Hollywood, Bannon served as executive chair of Breitbart News from 2012 to 2016. In a 2016 Mother Jones interview, Bannon declared Breitbart News the “platform for the alt-right.”

This propaganda is an attempt to convince white workers to identify with white supremacy and join with white capitalists, rather than fight for working-class interests in unity with oppressed nationalities.

Bannon left his post at Breitbart in 2016 to run Donald Trump’s presidential campaign; then he became the president’s chief strategist. Since then, he has increasingly gained influence in the White House. Bannon reportedly wrote Trump’s inauguration speech and drove many of Trump’s aggressive executive orders, such as the travel ban. Though he has no military or intelligence ranking, Bannon now has an unprecedented seat on the National Security Council.

Bannon predicts an apocalyptic conflict between Muslims and “Judeo-Christians,” between “the East” and “the West.” He has openly expressed eagerness to wage war against China and against “radical Islam,” thus ramping up the  U.S. imperialist war machine for more aggression. Bannon said in 2016 that he can use Trump’s power as a “blunt instrument” to implement his white-supremacist and warmongering agenda.

What is the alt-right?

The unifying principle of Bannon’s ideology is as old as the United States itself: white supremacy. But even Bannon knows it’s more effective to use a euphemistic term like “alternative right” or “alt-right.” This term refers to a wide array of far-right groups and individuals, including neo-Nazis, “men’s rights” activists, anarcho-capitalists and right-wing libertarians who go beyond mainstream conservatism.

The white supremacy of alt-right propaganda commonly criticizes “establishment conservatives” of the Republican Party for not being openly racist enough. Those expressing this racist ideology have a strong presence on internet forums like 4chan and Reddit. It remains unclear the extent to which various groups claiming an “alt-right” identity are in communication and organized toward common repressive goals.

“Alt-right” ideology is essentially a white supremacist response to the decay of capitalism. Deep economic crises, like the one the U.S. economy has been in since 2008, accelerate fear and uncertainty among those in the middle class who have lost wealth, such as small business owners and small-scale farmers.

This extremist-right ideology is especially effective for the U.S. ruling class. The exploitation and violence of white supremacy lay the foundation for racist ideology to mobilize the middle class against segments of the multinational working class and to divide white workers from Black and Brown workers and migrant workers. Oppressed nationalities and immigrants are thus blamed for the problems created by the very ruling class that is oppressing all workers, including white workers.

How we can fight

The development of the propaganda and ideology associated with the white supremacist “alt-right”is deeply intertwined with the new administration. Trump’s reactionary rhetoric emboldens and normalizes these hateful, violent beliefs and actions. The fight against Trump’s agenda and the entire U.S. ruling class is, by necessity, a fight against all rising reactionary forces, including the so-called alt-right.

Those associated with this new face of white supremacy have a track record of violence. Advocates claiming “alt-right” ideology have taken to social media, especially Twitter, in search of undocumented immigrants in order to report them to Immigration, Customs and Enforcement. The gunman who killed six and injured 19 people at a Quebec mosque was found to be a Trump supporter and alt-right internet troll. A protester at a Milo Yiannopoulos event in Seattle was shot by a gunman who identified with the alt-right.

However, this rise in white-supremacist violence has been met with powerful resistance from progressives and anti-fascists. After Yiannopoulos was shut down by protesters at two UC campuses, Berkeley officials warned that Yiannopoulos was planning to expose undocumented students during his speech. (tinyurl.com/jkyyzj9)

The wave of resistance is a sign of hope that the working class and oppressed will not stand by as right-wing terror rears its ugly head. In order to effectively oppose Trump and the entire capitalist class, these forces must prepare to resist the far right at every step and in every area of struggle.