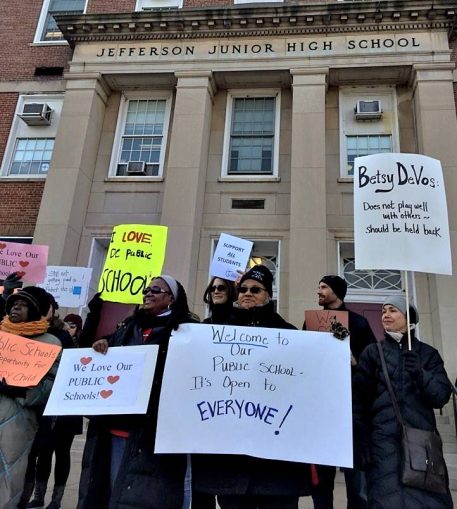 Feb. 13 — The Democratic Party’s inability to stop or even slow down the dramatic shift to the right, represented by the accession of Donald Trump and his gang of bigots to head the government, was proven once again when the Senate Democrats failed to react as Majority Leader Mitch McConnell invoked an obscure gag order to shut up Sen. Elizabeth Warren.

Warren had been reading into the record a letter written in 1986 by Coretta Scott King, in which the Civil Rights leader excoriated Alabama Sen. Jefferson Beauregard Sessions’ racist history. Sessions at that time was a candidate for a federal judgeship. King had written that Sessions “used the awesome power of his office to chill the free exercise of the vote by black citizens.”

As even more proof of Trump’s own racism, the billionaire realtor nominated Sessions to head the Justice Department. Warren was at the point in King’s letter that showed Sessions was recognized as an open racist and should not be confirmed by the Senate when McConnell gaveled her down.

As Warren argued for her right to speak, the other Democrats sat frozen in their seats.

They should know better

All the more liberal of the capitalist media are agreed that the crew Trump has assembled to head the various branches of government will try to turn back the clock on everything from civil rights, women’s rights and workers’ rights to environmental protection and public education. And everyone knows that Trump came nowhere near getting the popular vote, trailing his opponent by almost 3 million votes.

The election was certainly no mandate for ripping up the gains won over decades of struggle by progressive mass movements.

The people know this. They know that they must act, must go beyond the usual strategies of writing to Congress or sending petitions or letters of protest. They have come out into the streets by the millions to oppose this ultrareactionary gang. The massive, global Women’s March of Jan. 21 was a direct repudiation of the misogyny, crude sexism, racism and scapegoating of immigrants and refugees, particularly Muslims, by this far-right government.

The least the Senate Democrats could have done was refuse to sit idly by while their colleague was rudely forced off the podium. In scores of countries, such an affront would have caused an uproar, maybe even some fists to fly. But here, the gavel came down, and business continued as usual. This is how the two-party system works in the U.S., with both parties bowing before the power of Big Money.

In the same week, another appointee who makes a mockery of the institution she is empowered to run breezed through. Betsy DeVos, an enemy of public schools, became head of the Department of Education on Feb. 7. DeVos was never a teacher or even a student in a public school. Her acquaintance with education comes from being a lobbyist for charter schools, which, like privately run prisons, serve the profit motive.

Public school systems in many places have already been starved of funds, especially as inner cities lose jobs and population. With DeVos as head, the Education Department is expected to adopt measures that would advantage private charter schools, while squeezing both teachers and students in public schools.

Though the DeVos nomination met no effective opposition in Congress, it wasn’t the same in the real world. When the new education secretary tried to enter the Jefferson Middle School Academy in Washington, D.C., on Feb. 10, she was blocked by demonstrators at the school’s entrance. Some held signs reading, “We love our public schools.” CNN reported, “BlackLivesMatter DC, the Black Youth Project and other groups had sent social media messages urging people to protest at the school.”

In coming days, other appointees whose task is to undermine the institutions they are appointed to run are expected to be confirmed by the Senate. Particularly odious are Andrew Puzder for labor secretary and former Texas governor Rick Perry to head the Department of Energy.

Puzder is CEO of CKE Restaurants, Inc., the firm that controls Carl’s Jr. and Hardee’s fast food chains. His credentials to head the Labor Department? Being the boss in a business notorious for its super-exploitation of low-wage workers, many single mothers of color.

Perry, Trump’s pick for the Department of Energy, is hated in Texas for his use of the death penalty and for his subservience to the oil and gas industry. The National Institute on Money in State Politics reported in 2011 that Perry, “even before establishing super PACs to rake in unlimited contributions from Texas billionaires in his presidential run, has been one of the best funded politicians in history. Since his 1998 candidacy to be George W. Bush’s lieutenant governor, Perry has raked in $117,091,642 in campaign contributions, with the oil and gas industry the top contributor.”

And since the billionaires really run both parties in Congress, don’t expect the fightback to come from there. It must come from those who have no stake in this capitalist system and every reason to resist the hatred and bigotry it fosters to keep us divided.