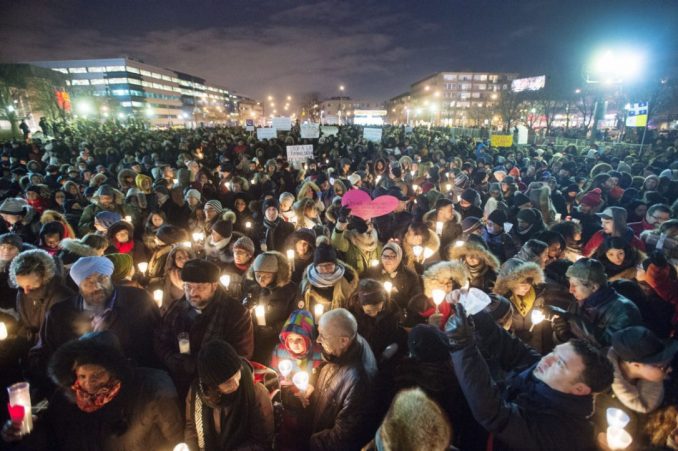 People attend a vigil for victims of the Quebec City mosque shooting in Montreal.

A white supremacist named Alexandre Bissonnette walked into the Grand Mosque in Quebec City, Canada, on Jan. 29 and allegedly killed six people and seriously injured at least nine more while they were praying. These were the first murders in Quebec City in the past 21 months.

Bissonnette used a high-powered rifle, for which he received training from gun clubs in the Quebec City area, and a pistol. According to a video on VTA, a Canadian news service, the rifle had enough power to propel bullets through walls in the mosque.

The names of the victims are brothers Mamadou Tanou Barry and Ibrahima Barry, Abdelkrim Hassane, Khaled Belkacemi, Aboubaker Thabti and Azzeddine Soufiane. Although all were Canadian citizens, two were from Algeria, two from Guinea in West Africa, one from Morocco and one from Tunisia. Between them, they had 17 children, most of them young. (TVA, Jan. 31)

Most of the victims had professional or skilled jobs, which goes along with Quebec’s deliberate attraction of educated immigrants who are French-speaking, particularly from West Africa and Haiti.

Fox News and the alt-right media immediately reported that it was two Muslims shouting “Allahu Akbar” that carried out the massacre. This report was picked up thousands of times and was trending as a top story. Fox News didn’t retract its false story until the office of Prime Minister Justin Trudeau called them.

Once the fact that the massacre had been committed by a white French Canadian was revealed, imbued with the rants of Donald Trump and Marine Le Pen, the leader of France’s soft fascist National Front, U.S. media coverage of this massacre plummeted.

But in Canada, one night after the massacre, thousands of people, many from the tight-knit Guinean community in Quebec City, filled the square in front of the mosque, in bitterly cold weather — in the low teens — for a memorial vigil and demonstration. The prime minister of Canada, Justin Trudeau; the premier of Quebec, Philippe Couillard; and the mayor of Quebec City, Régis Labeaume, spoke after some prayers were offered by Muslim religious leaders.

There weren’t a lot of signs, but the ones on the video clips from La Presse (Jan. 31) read: “Unity and Solidarity against islamophobia,” “Let us unite against hate” and “We are all Québecois.” It was a solemn march. La Presse quoted a teacher from the University of Quebec at Rimouski (UQAR) that the words of Donald Trump had called out a monster.

Smaller vigils took place in the regions of Quebec to the east of Quebec City, on both sides of the Saint Lawrence River: Bas-Saint-Laurent, Gaspésie, Îles-de-la-Madeleine and the Côte-Nord (North Coast). The North Coast has significant First Nation (Indigenous) communities. Both Rimouski, a city of 50,000 on the Gaspé Peninsula, and Sept-Iles, a terminus of a First Nation-owned rail line to the iron mines of Labrador, have mosques.

UQAR is trying to figure out how to protect some 350 students who are Muslims.

There has been quite a sharp, vigorous campaign mounted against “trash radio” (“radio poubelle”), which spews racism, sexism, xenophobia and Islamophobia and has called for the assassin to be ­pardoned.

There were more vigils/commemorations held throughout Canada. The DawaNet Fund announced that it had raised $135,000 for the bereft families and received thousands of messages of support.

Canada has accepted 40,000 Syrian refugees in the past year. While there are certainly some Canadians with reactionary, backward opinions, they have been met with vigorous opposition on many different levels. A number of Canadians are urging their country to accept more refugees.

While accepting tens of thousands of Syrian refugees practically challenges Trump’s freeze on Syrian refugees in the U.S., Canada is not going to say anything much about it, given the tremendous influence the U.S. has on its economy.