Uber Technologies agreed Jan. 19 to pay out $20 million to settle claims that the online ride-sharing platform lied about how much drivers could earn. Uber offers on-demand taxi service at lower rates than traditional cab companies by dumping the extra costs on its “independent contractor” drivers.

But Uber’s contempt for workers goes far beyond the way it advertises for prospective drivers. The N.Y. Taxi Workers Alliance, mostly immigrants from Southwest Asia, called a one-hour strike at JFK International Airport on Jan. 28 to protest the detainment and deportation of Muslims traveling to the U.S. Rather than extending solidarity, Uber announced lower-than-normal rates for travelers to and from the airport, apparently in an attempt to break the strike.

Even before that, Uber CEO Travis Kalanick had joined Trump’s economic advisory council, the Strategic and Policy Forum, to help carry out the racist billionaire’s war on workers and the oppressed. After thousands joined calls to #BoycottUber, however, Kalanick announced Feb. 2 that he would step down from that post. Kalanick got the message loud and clear: He’d better not use racism to promote Uber, or he’ll get mass resistance! (arstechnica.com, Feb. 3) 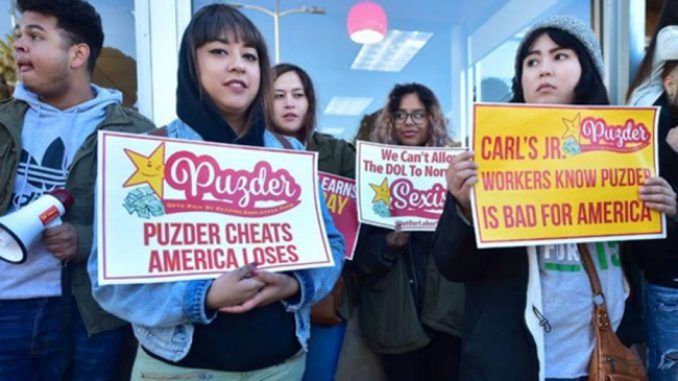 Millionaire Puzder opposes basic workers’ rights — a living wage, paid sick leave and overtime, safe working conditions and benefits like health care and pensions — for some of the lowest paid U.S. workers, mostly women and people of color. No wonder restaurant worker and activist groups have mobilized nationwide against him. (Workers World, Jan. 19) After coast-to-coast protests on Jan. 12, Fight for $15 organizers held protests on Jan. 26 at quick-service restaurants in 31 cities, from Los Angeles to St. Paul, Minn.

The Raleigh, N.C., City Council voted Jan. 17 to adopt a universal living wage. The measure will boost pay nearly 15 percent for the lowest-level, full-time city workers. Now all city workers will make at least $13.76 an hour by the next fiscal year. The measure is expected to cost the city an additional $500,000 annually for 215 security guards, mechanics and customer service reps. The measure makes Raleigh the tenth city in North Carolina to adopt a living wage measure. (Raleigh News & Observer, Jan. 17)

The workers turned to Trabajadores Unidos de Washington, D.C. The local advocacy group was able to use the District of Columbia’s 2014 Wage Theft Prevention Act, which holds both contractors and subcontractors liable. According to Arturo Griffiths, TUWDC executive director, the twenty-three Genesis workers were each owed more than $46,000 in back pay. Manganaro finally paid them on Dec. 8, two months after their first complaint. “This case is an important lesson for all DC workers,” says Griffiths. “[It shows] how important it is for … workers to understand the new law.” And why all cities not only need laws to stop rampant wage theft, but also workers’ organizations and unions to enforce them. (dclabor.org, Jan. 25)