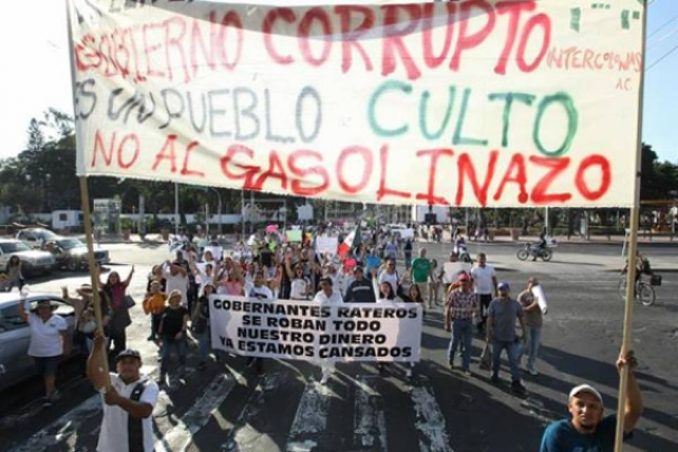 Workers and the community join in a protest in Guadalajara, the capital of the western state of Jalisco, against the fuel price hikes in Mexico on Jan. 2, 2017.

On Jan. 1, 1994, the heroic Indigenous rebels of Chiapas under Zapatista (EZLN) leadership launched a call for struggle after being forced into the NAFTA trade pact. Now, in 2017, a larger part of the peoples of Mexico is engaged in various resistance struggles.

Many of these struggles are the result of a reaction to that nefarious “free-trade” agreement that turned Mexico into a neocolony of international but predominantly U.S. capital. Having lost its economic sovereignty, Mexico is at the mercy of Wall Street and, consequently, the crisis of big capital, led by the USA.

The resulting economic and social deterioration has provoked on one hand, misery and consequent migration to “the giant of the north,” but on the other, mass indignation and a strong drive for popular struggle. From the struggle of the teachers and the miners, the fight demanding justice of the Ayotzinapa 43, to the recent and widespread protests extended throughout the country against the imposition of a 20 percent increase in the price of gasoline — called “the gasolinazo,” the people have been demonstrating in the streets.

As comrade Teresa Gutiérrez wrote in her article, “Warning to Trump: Bash Mexico, Incite Revolution,” in the Feb. 1 Workers World/Mundo Obrero: “Mexico is ripe for revolutionary change. The Mexican government could be toppled at any moment were it not for the billions of dollars the U.S. sends under the guise of fighting drugs.”

It is in this historical context that on the weekend of Jan. 27-29, the Second National Ordinary Congress of the New Central of Workers (the NCT) of Mexico was held. In a press release, José Humberto Montes de Oca Luna, coordinator of the Executive Structure and exterior secretary of the Mexican Electricians Union (SME), said: “With the presence of numerous international guests from Brazil, Argentina, Uruguay, the United States, Nicaragua, Australia and Switzerland, as well as about 300 delegates from more than 50 organizations from 20 states of the [Mexican] Republic, our Second Congress successfully concluded.”

Prior to the congress, the document, “About the Current Situation,” was sent out widely for analysis and political discussion. After an analysis of the capitalist crisis, the text explained the national situation, ending with the “Tactics of the NCT in the Critical Juncture of 2017.”

Some of the resolutions included in the communiqué illustrate the essence of this new labor central. These include the statement: “Against Donald Trump for his anti-Mexican, racist, anti-immigrant, misogynist and retrograde policy, based on his protectionist and neo-Nazi discourse, we:

The resolutions also include solidarity with the struggles of Latin American peoples against neoliberalism and the Trump offensive. The communiqué concludes, “The NCT is beginning a new stage in its construction of the social, political and economic emancipation of the working class of Mexico and the world.”

How did the NCT come about?

In 2011, during a national trade union conference, the SME presented a paper titled, “For a new center of workers of the countryside and the city.” After deliberations, the proposal emerged for the construction of an inclusive, democratic and class-conscious central that would unite the diverse sectors of the working class.

The program’s proposal has been based on an in-depth analysis of the situation in Mexico, not only since NAFTA, but historically since the revolution of 1910-1917, within the international context and the advances of capitalism towards more predatory forms. The complete program can be read at nuevacentral.org.mx.

It is important to emphasize the class-based character of this labor central and its commitment to the unity of Mexican progressive forces, the effort for ideological formation represented in two trade union training schools supported by the Rosa Luxemburg Foundation, and the work of political dissemination through its printed newspaper and the use of virtual social media.

The NCT describes itself as an autonomous, democratic, internationalist, independent and anti-capitalist central with emphasis on solidarity. It is made up of 60 organizations, among which are two trade union centrals that together comprise 12 unions. In addition, there is a confederation of cooperative organizations, the National Cooperative Alliance, with about 200 cooperatives.

Montes de Oca told Workers World-Mundo Obrero: “The congress was successful in that it was able to bring together 50 trade union and popular organizations from 22 states of the republic. Above all, its political definition will allow us to launch a new stage of construction that will include the organization of non-organized workers, highlighting the fundamental role of women and young people in this process.”