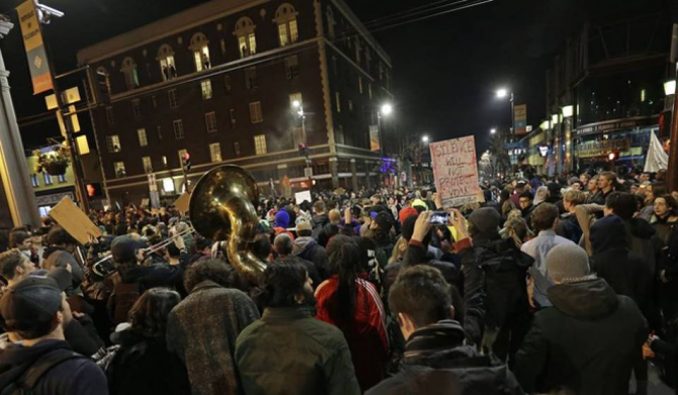 Thousands of student, community and other activists shook up the University of California at Berkeley campus when they militantly protested an event featuring notorious ultraright mouthpiece, Milo Yiannopoulos, on Feb. 1.  They succeeded.

The demonstrators’ determination “by any means necessary” to stop the editor of the white supremacist Breitbart tabloid from spreading his vile bigotry pushed the administration to cancel the meeting. Despite police repression, the activists scored a victory.  Yiannopoulos was whisked off campus.

Mukund Rathi issued a call on Jan. 31 in The Daily Californian to UC Berkeley students and community members to protest the administration’s decision to allow Yiannopoulos to speak. University officials claimed it was a “free speech” issue.  They refused to cancel the event despite strong opposition by students, alumni and community residents.

Rathi said: “The Berkeley Against Trump Coalition, previously … the J2O Coalition, invites all solidarity-minded students and other members of the campus community to protest with us against the far right agitator, Milo Yiannopoulos, on Feb. 1.  We will … show our unwillingness to allow our campus to be used to spread [his] vile bigotry [now] when the forces of oppression are ascendant nationally.”

Hate speech is not “free speech”

Unfortunately, some liberals violence-baited the protests and criticized the alleged restrictions of “free speech” as an assault on “democracy.”  But hate speech — whether racist, xenophobic, sexist or anti-LGBTQ — should not be tolerated anywhere.

Terri Kay, a Workers World Party activist in California, responded to the criticisms: “The action’s purpose was to stop hate speech, which terrorizes the most vulnerable in our communities. This successful action let the fascists know that they won’t be tolerated here. Unions like the International Longshore and Warehouse Workers and the United Electrical Workers in Connecticut have organized workers defense guards to defend their members and other community members threatened by the Nazis, the KKK and their ilk.

“The best defense is a strong offense,” stressed Kay.  “The large crowd cheered when the barricades were taken down and the bonfire was lit. They cheered even louder when it was announced that the event was cancelled, which was why we were all there in the first place. Kudos to the antifa [anti-fascist] and anarchist forces who took the lead on this militant and righteous action.”

Milo Yiannopoulos, born into privilege, built a scam-ridden and scandalous empire in the world of social media and technology.  He is notorious for his reactionary diatribes against Islam, immigrants, LGBTQ people, women and people of color.  He assails Black Lives Matter activists.  A misogynist, he promotes “rape culture.”

A narcissist obsessed with self-aggrandizement and publicity, it’s no surprise that Yiannopoulos is an ardent Trump supporter.  Laurie Penny calls him “one of the worst people I know,” and “a professional ‘alt-right’ provocateur,” who enjoys abusing women and people of color.  She says, “Milo believes in almost nothing concrete — not even free speech,” as is “true of Trump, Ann Coulter, Boris Johnson and Nigel Farage.” (medium.com, July 21)

This bigot should be taken seriously and countered.  Yiannopoulos’ Twitter account was deactivated permanently because he led a racist, misogynist Twitter attack on Black actor Leslie Jones, causing her to close her own account. Remorseless, Yiannopoulos bragged about it.

Neofascists like Yiannopoulos resemble the pro-Brexit and other European ultraright forces who scapegoat immigrants for capitalism’s failures. These far right hucksters pretend they present an antidote to the economic crisis, unemployment, low wages and austerity — as they whip up racism amd Islamophobia and push “law and order” — all aimed at the oppressed.

The militant protest by brave young activists in Berkeley stopped a neofascist from spewing his racist venom. Their action contributed to the building of international solidarity with workers and oppressed people.