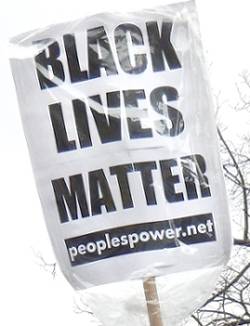 Have you ever experienced “Riding While Black”?

Imagine traveling in a 50-passenger bus halfway across the country, Chicago to Washington D.C., in route to the anti-Trump Inauguration rally and protest demonstrations and no one, not one of your fellow passengers, all white leftists, bothers to sit next to you. Not either to or from your 14-hour journey does anyone even engage you in casual conversation.

“Is that an African shirt?”

“Want some company? Mind if I sit down?”

“How about them Cubbies?”

A sure conversation starter, huh?

Don’t get me wrong. Being able to flex 60-year-old legs in the insanely cramped space of bus seats was a blessing, spreading out a couple of unread books in the vacant seat next to me helped pass the time. Time is a valuable commodity, especially when social activism is in search of political discourse, political work.  After all, each and every one on that trek was aware of our mission to D.C. It wasn’t any secret.

But all this about who does and does not sit next to a brother is not the point. So some will wager, “What is the point, really?”

Throughout the ride, I reflected on a valiant Rosa Parks, long denied the bus seat of her choice in the era of Jim Crow, who simply refused to “get up” when told to do so.  Marking the unfurling precursors of a mass movement that went on, unyielding and unrelenting, the very notion of refusing to yield to “normalized” unethical racial practices was born that day.

In the supposed post-racial [U.S.] America, Black folks routinely work daily driving buses of public and private transportation nationwide. The drivers of our trip to D.C. were Black. I pondered the so-called social engineering of the past.

Writer Ishmael Reed is attributed with coining the phrase “reckless eyeballing,” the grave sin of which Black men and youth like Emmett Till were commonly accused. Gazing into face or body parts of some white woman was deemed a crime often punishable by death. And in the case of Mamie Till’s boy, he was shot, hung, body drug on a dirt road for miles and for demonic glee drowned with a lead weight tied round bout his neck in hopes he not be found in low standing water.

Mamie Till wanted the world to see the savagery of what white racism had done to her son. An open casket revealing his grotesquely mutilated face and body should have shocked a world gone mad. But did it?

Strange enough, the night of the D.C. trip one passenger, an older white guy, squat low to the ground, wearing a Michigan starter jacket chain smoking during bus stops, would throughout the trip give me the ole “skunk eye.”

Several times I caught him staring as if he was the very face of the Klan — full of hatred! It kinda unnerved me at first. That is until arriving at the rally, witnessing some of the real faces of hatred. Bikers for Trump, a motley gaggle of vagabonds whose distorted snarls on their unshaven, hard, undistilled mugs sent shivers down my spine, looking like they’d wrap a link chain around a lifeless body, dragging it for miles on end.

The short, squat Michigan jacketed guy wasn’t the only one though. Several other cross-eyed glances and sideway leers sent unwelcoming vibes, making a not too comfortable ambiance to say the least.

Was I imagining things or just miffed for want of comradeship and “inclusion” by cadre who were supposedly united in struggle?

What was ringing in my mind’s ear was the question of “real” unity in actual on-the-ground struggle. What did it mean? And are we accountable and self-critical in the face of such struggle? Did any of these passengers, mainly young white males and females, have anything the least in common with an older Black guy?

Did not anyone want to “pick” my brain? Ask what I “thought of Trump” or “Why in the blazes was I really even there?”

The proverbial “elephant in the room,” during the entire bus ride I felt an uneasy chasm. Not forlorn but removed, cast apart. Kinda like Harry Belafonte’s displaced character in the 1959 woefully under recognized movie, “The World, the Flesh and the Devil.” Surviving a nuclear holocaust, Belafonte, finding himself alone amidst the rubble of complete disaster, stumbles upon not one but two white folks. His day was not beginning to shape up in good fashion.

In Ralph Ellison’s “Invisible Man” was not the protagonist a “Black” male? Which brings to mind the caste system of apartheid, a practice de jure of invisibility of Indigenous people in southern Africa by colonialists.

Does not the inhuman Afrikaans epithet “apartheid” derive from the words “apart” or “separate”?

In the still of the night’s journey pondering moments of silence spring eternal. Mostly young people on the bus, I wondered, “How long had they been in the struggle for human rights?”

Could they relate to the Black Liberation movement let alone Black people?

Was there an immediate urgency relative to the Black Liberation struggle in relation to other human social struggles? What is their sociopolitical agenda? Did they really understand and internalize this?

Was there a precedent that overrode the other? Or was Black Liberation indistinguishable from the rights of any other community of people, such as “immigrants,” “Muslims” or “LBGTQ”?

Importantly still, why is the white left apt to refer to an imaginary “people of color” as opposed to using “Black” or “African” as a self-determining symbol of language in this politically correct time of “identity politics”?

“People of color” is safe, won’t offend and furthermore doesn’t categorize. Black folks as an unrecognized nation of people are therefore rendered a non-factor, inert and impotent. Unimportant to the conversation. This, in face of Obama apologists, there is no post-racial society in America. Not on the liberal left. Not on the liberal right. Not with the so-called democratic socialists (surely a misnomer), nor in this case the white radical left.

Could that have been the reason I got no conversation to and from D.C.?

In the grand, hegemonic scheme of worldwide imperialism and its diabolical monstrosity, white supremacist racism, are not Blacks/Africans debased lower than the lowest rung of beings, if at all considered human?

“Beneath the underdog,” jazz composer, bassist Charles Mingus called them. Psychologist and freedom fighter Franz Fanon knew them as “The Wretched of the Earth.”

African people are just a few minutes removed from pseudoscientific eugenics and chattel slavery, which ruled their genocide as humanely necessary if not downright warranted by almighty god himself! Laws were set in place to authorize it so.

Racism can be overt, subtle and oh so quiet. Quietly subsuming itself into the very deepest core of society. Racism has been so corrosive psychologically for all humanity but particularly for Africans. But I am not here to make that case, for others have long done just that.

Just who are the “oppressors”? Are they “hiding” in plain sight?

Or are they talking “down” to people? Black people.

In case the white revolutionary left missed it, Black people are not abstract objects and lifeless things for which fanciful, well-worn buzzwords are meant to shallowly unify.

I wasn’t looking for no “power” fist bumps from everyone passing me by in the aisle going to the toilet or those prompting me to join them in chants of “Black lives matter!” Yet I wasn’t looking to be subtly marginalized, isolated by a crew of white comrades either.

Next bus trip I’ll take along some Herbie Hancock “Headhunters” music, a good set of headphones and a dog-eared copy of W.E.B. DuBois’ classic volume, “Black Reconstruction in America,” I’ve been meaning to finish in my spare time for years.

Perhaps in the meantime in between time, them same white leftist folk will learn of what it really means to “struggle” in collective unity with the token Black guy.

I won’t be holding my breath. This was not a Spike Lee “Get On the Bus” moment.