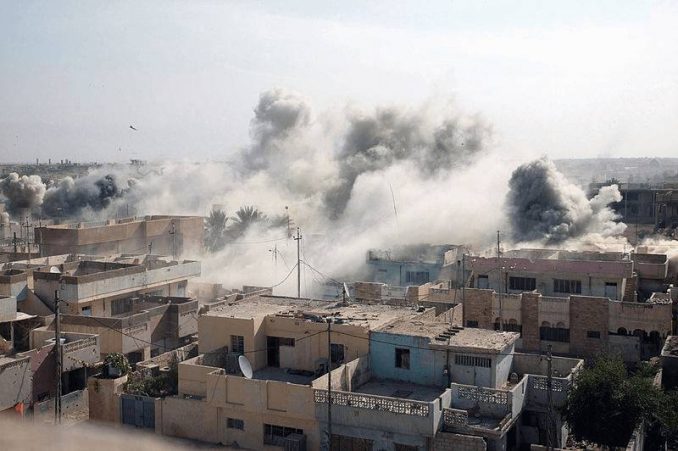 Workers World received this report on Jan. 19 from the editor of Justice for Iraq in Britain about the ongoing battle in Mosul. The U.S. reports this battle as an attack on the Islamic State group (IS), but as is said here, most of the victims are civilian residents of this large Iraqi city.

As you might have heard, the [U.S.] American Coalition has been bombing civilian areas in Mosul. Over the past few days the coalition targeted three houses of well-known professors and researchers at Mosul University. One of them was my college professor and mentor,  Dr. Mohamad Tybee Al-Layla.

Dr. Al-Layla got his Ph.D. in geotechnical engineering from the University of Texas. He worked as a faculty member in the Department of Civil Engineering at the Engineering College of the University of Mosul since the early 1970s. He was assigned to be the chairperson of the Civil Engineering Department and the college dean twice. He supervised more than 30 Ph.D. and master degree theses in geotechnical engineering and civil engineering. He published 48 research and technical papers in Iraq and abroad, and became an editor of three scientific journals and magazines.  He also received a prestigious award at Iraqi Science Day, June 2, 2014.

Dr. Al-Layla worked hard with utmost sincerity for about 40 years to educate and help thousands of highly efficient and intelligent engineers graduate.  Many of them became ministers, deputy ministers, academics and high-ranking executive directors in geotechnical, irrigation engineering and other civil and political posts inside Iraq and abroad.

Dr. Al-Layla was a great scientific Iraqi figure who never let down or disappointed the University of Mosul community or the city of Mosul in its most difficult times. Yet the [U.S.] American Coalition targeted his house in the bombings, and he and his innocent family suffered painful deaths, buried under the rubble of their house.

Being one of Dr. Layla’s students, this breaks my heart.  This criminal act will remain an unforgettable disaster to us, one that all parties have responsibility for.  It reminds all of us that we are still sinking into the abyss which the criminal U.S. occupation of Iraq has led to.

May the souls of Dr. Al-Layla and the many innocent thousands of Iraqis dying every month in Mosul at the hands of ISIS and the Coalition without any accountability or remorse rest in peace.

The battle for Mosul, an ISIS stronghold in northern Iraq, has raged for months. In the last four months, an estimated 145,000 people have been displaced.  The vast majority of them need major humanitarian assistance, reports the United Nations.

Civilians have been caught in the crossfire between Iraqi ground troops and ISIS militants. The latter group shoots at anyone leaving the city without their authorization. Militias tied to regular Iraqi forces have been accused of sectarian atrocities. But the biggest cause of civilian fatalities has been Coalition air strikes, in which British forces are also involved.  It is alleged that some of them have deliberately targeted hospital and educational establishments.

What is not in doubt is the huge increase in bombardments that have been killing civilians since the start of 2017. Airwars.org attempts to record all reported airstrikes. It also comments on the degree to which each strike has been independently corroborated.

To give a sense of the level of bombardment, here are excerpts from Airwars.org reports for the first 12 days of this year.  (See  tinyurl.com/h77tjnh)

January 2: Four women were killed and eight were injured by Coalition strikes in Mosul, according to local reports.

January 4: Press and local sources said that 16 displaced civilians were killed or injured, mostly women and children, after Coalition warplanes targeted their houses in the 17 July neighborhood, at the right side of Mosul. A local source said that civilian Imad Ahmed was killed in raids on the Farms district, north of Mosul.

Fourteen people, including women and children, were killed, and 15 wounded by Coalition strikes in the Garage and Fatih areas, say local reports. Local sources said two named civilians (a father and son) were killed after a missile targeted their house in the left side of Mosul.

January 6: Local sources and relatives of victims said that more than 20 civilians from three families were killed, including women and children, after Coalition airstrikes targeted their houses in front of Saddam Mosque at the entrance of the Farms district, north of Mosul.

Local sources said that a family of three children and their grandmother were killed after their house was hit by a missile during raids in the agricultural residential neighborhood in the central Mosul area, which is still under ISIL control. Local sources said civilians were killed and injured after Coalition Apache helicopters targeted a market in the Sumer neighborhood, southeast of Mosul, with machine guns.

January 8: One civilian was reported killed in alleged Coalition airstrikes that targeted an ISIL member in a civilian vehicle, in the Hadbah neighbourhood in northeast Mosul. Local reports say that the streets in eastern Mosul were covered by the bodies of dozens of civilians.  Their deaths were caused by Coalition airstrikes and heavy artillery.

Local reports indicated that shelling struck civilian homes in the Sukkar, Talla and Mufthana neighbourhoods in eastern Mosul, “resulting in the burying of dozens of civilians under the rubble,” says an account in an Iraqi Spring Media Centre report. Local sources and relatives of victims said that Coalition airstrikes targeted a family house in the Muthanna neighborhood northeast of Mosul.

Local sources reported that Coalition airstrikes bombed a house in the Maliah neighbourhood, at the left side of Mosul during an operation to retake it. Up to 17 civilians were killed and five others injured, mostly women and children from the same family; they were inside the house at the time of the strike.

January 12: Local sources reported that the international Coalition and/or U.S. aircraft had carried out airstrikes in the New Mosul neighbourhood, at the right side of Mosul, leaving up to 30 civilians dead and 14 others wounded.

To emphasize, these are the strikes reported in a period of just 12 days. Yet, sources in Iraq suggest this may be a severe underestimation of the true numbers of civilian fatalities, which they say could be around 10,000.

Yet, with very few exceptions, none of this has been reported in the Western media.  This is a failure of historic proportions which conceals this humanitarian tragedy.

At the end of 2016, the British Parliament voted that British forces should take part in these bombardments.  How many civilian casualties have our troops been responsible for? Why is there no outrage at these aerial killings which Western powers are inflicting on the same country they invaded 14 years ago before ISIS — a creation of their own making —  existed?

Activists should lobby their members of Parliament and demand answers from the government about its involvement in this carnage, which can only increase the likelihood of more terrorist attacks on British soil.

This letter is posted at the Justice for Iraq blog.