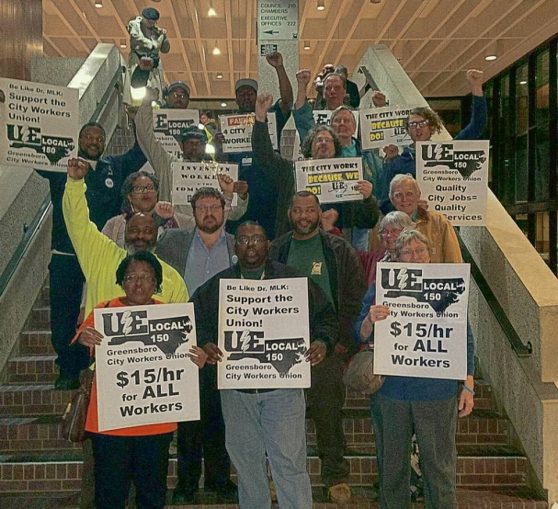 Greensboro city workers pack the city council on Jan. 17 in support of their newly formed union and for raising wages to $15 per hour now.

City workers in Greensboro, N.C., turned the tides of history when they packed a City Council meeting on Jan. 17. They asserted their formation of a union and requested regular meetings with the city manager and department heads.

North Carolina is the second-least unionized state in the country, with less than 2 percent of all workers unionized and a Jim-Crow-era ban on collective bargaining for public sector workers (the state takes turns with South Carolina in being the least unionized).

Yet Greensboro city workers and workers across the state have been organizing in a pre-majority union and asserting their rights while building a statewide movement and the North Carolina Public Service Workers Union, Electrical Workers (UE) Local 150, to push back against the right-wing tide.

Greensboro is where, on Feb. 1, 1960, four Black college students from the North Carolina Agricultural and Technical State University sat in at a Woolworth’s department store to protest racial segregation. Their action helped to propel a national movement.

At one point in time, city workers were denied the right to organize. But in 1968, a sanitation workers’ strike in Memphis, Tenn., rocked the world and garnered the support of Dr. Martin Luther King Jr. — who was assassinated while in Memphis for the struggle.

Building on the strike’s momentum, city workers in North Carolina began organizing for their basic constitutional rights to freedom of association and the freedom to petition their government. They won a U.S. District Court of North Carolina ruling in 1969 that clarified city workers’ right to join a union.

Greensboro was one of the first Southern U.S. cities to agree to raise their city employees’ wages to $15 per hour by 2020, in a resolution passed in August 2015. Workers were initially told their wages would be raised to $10 per hour in late 2015. Yet — as of this writing, nearly a year and a half later — not a single low-wage worker has seen the first step in the implementation of this wage increase.

Adele Holland, who is an afterschool counselor in the Parks and Recreation Department, has been making $8.33 an hour, along with a few hundred of her co-workers who are supposed to benefit from the wage increase. She has been organizing workers in her department to join the union and told her story to the City Council on Jan. 17.

The union campaign proves that ordinances and progressive public policy changes mean very little if the people they protect are not organized to defend and enforce them.

After the action, the city manager’s office pledged to raise the floor wages by Feb. 1.

Charles French, a sanitation worker and newly elected president of the Greensboro City Workers Union chapter of UE 150, said it best when he spoke in front of the City Council meeting: “We feel we are vital to a healthy and prosperous city. Our work to keep the streets clean, to keep the water running, to repair broken roads and sidewalks, to run the public library system, to maintain the parks, to watch after children in summer camps and afterschool programs are critically needed by all residents in our city.”

French continued: “Yet our needs, perspectives and voices are far too often overlooked. Over the past few months, we have united to become a strong voice about a range of issues impacting city workers. Some concerns [include] rising cost of living without real raises; lack of basic workplace protections; workplace harassment and discrimination; overuse of temporary and seasonal (‘roster’) employees; lack of proper numbers of staff in our departments; and more.”

Five communist union and community activists were shot and murdered on Nov. 3, 1979, in the clear light of day by members of the Ku Klux Klan. Several others were injured. The organizing, which had a clearly anti-racist orientation, was focused on Morningside Heights, a public housing project in the Black community, and on Black workers at the Cone textile mill plant.

Even though the massacre was captured by a news camera, not a single one of the KKK members was ever convicted or served a prison sentence. It was later documented that the Greensboro Police Department and federal Bureau of Alcohol, Tobacco, Firearms and Explosives officials collaborated closely with the KKK.

Members of UE 150’s statewide executive board were amongst the survivors and those that organized support after the massacre. Charles French, the new Greensboro chapter president, was then a youth who lived at Morningside Heights and witnessed the 1979 tragedy. In many ways, the union was born out of this atrocity.

Yet, decades later, much of the racial tension and wounds from the massacre are reflected deep inside the city and its workforce.

Only by a concerted community-labor campaign will this history ever be turned around. The Rev. Nelson Johnson, Joyce Johnson and the Beloved Community Center have been at the center of this struggle for the last few decades, including many bitter fights against the racist, brutal police. Rev. Johnson spoke in favor of the workers organizing a union at the City Council meeting.

When workers began organizing the union, they understood that organizing against racism and for solidarity between Black and white workers was a huge priority. The workers launched a concerted campaign to reach out specifically to the white workers, to educate them about the benefits of joining the union. They sought to break down the bosses’ lies that it was only “a Black union.” They stressed that it was in white workers’ interest to unite with their co-workers and organize a union, rather than kissing the boss’s ass and snitching on their union co-workers.

A similar perspective on the greater political interest will need to be explained to all white workers and all working people in the coming years as we fight to expose the lies of the Donald Trump administration. Trump represents the interests of the owning elite, 1% billionaire class, and not those of anyone else.

When the KKK attempted to organize a parade this past Dec. 3, 2016, to celebrate Trump’s electoral victory, more than 2,000 people protested in downtown Raleigh, organized by the Triangle Unity May Day Coalition. A large group also traveled to Pelham, N.C., and then chased the KKK to Danville, Va. There, they marched and outnumbered the KKK, scaring them away from showing their faces at all.

City workers are an important strategic sector in the overall fight for economic, racial and social justice, and to challenge the racist, killer police. Workers are continuing to build a statewide movement in North Carolina which will lift up all oppressed and working people.Organize the South!