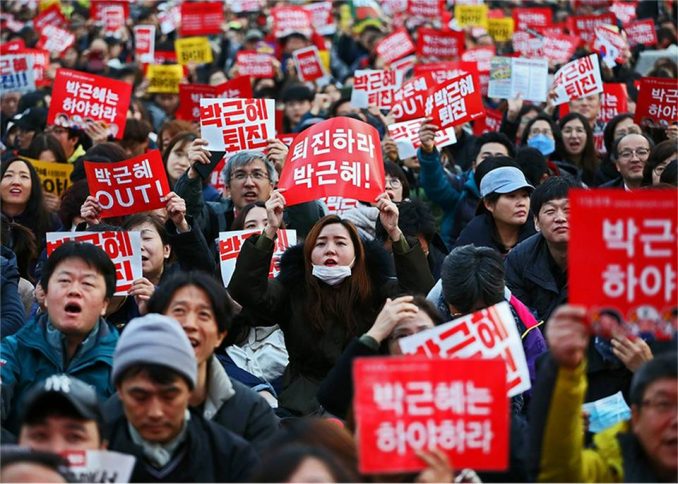 Thousands of South Koreans take to the streets in Seoul to demand President Park Geun-hye step down.

The political crisis in south Korea just won’t go away. The people are angry and organized, determined to get rid of the corrupt dictatorship of President Park Geun-hye. After months of massive demonstrations, Parliament in December voted to impeach her, but she refuses to leave office. An impeachment trial is now being conducted by the Constitutional Court.

The grievances against the Park regime are many. Most explosive are the charges of collusion between the government and the “chaebols,” the big conglomerates that dominate the economy and have grown super-rich exploiting south Korean workers. Foundations set up by President Park and a friend, Choi Soon-sil, have received millions in donations from these corporations. In return the president has pardoned 15 top executives of Samsung, Hyundai and other chaebols convicted of economic crimes.

Huge weekly demonstrations continue all over the country. The one in Seoul on Jan. 8 had more than a million people. The struggle has opened up deep rifts within the state. When a special prosecutor announced he was seeking to arrest Jay Y. Lee, head of Samsung, on bribery charges involving $36 million given to Park foundations, he was overruled within days by a high court judge.

The latest scandal to be unearthed involves a government “blacklist” of artists and performers who have been critical of the regime.

Under Park, the government has carried out a violent offensive against south Korea’s labor unions and made it easier for bosses to fire workers and get rid of full-time, steady jobs. Han Sang-gyun, president of the Korean Confederation of Trade Unions, was sentenced to five years in jail last July for leading protests against Park’s repressive labor policies.

Other issues have included the president’s unwillingness to appear in public as hundreds of high school students drowned over hours after a ferry boat capsized in 2014. The owner had added extra decks, making the vessel top heavy. It was all illegal, but brought him big bucks.

Park’s father was Gen. Park Chung-hee, who took power through a military coup in 1961 and ruled for 18 years. During all that time, he was a close ally of the U.S., sending 300,000 Korean troops to fight in the Vietnam War.

Behind the scenes, one can be sure that the Pentagon and clandestine U.S. agencies are doing everything they can to make sure south Korea continues to have a government that will facilitate the U.S. military occupation of the southern half of the Korean peninsula, which has been in place for almost 72 years.

However, the world has changed a great deal since the U.S. first occupied Korea at the end of World War II. Today 26 percent of south Korea’s exports go to China and only 13 percent to the U.S. With the election of U.S. President Donald Trump, south Korea is already being pressured by Washington to pay more for the many U.S. military bases in the country.

The Korea Times on Jan. 22 noted, “Trump, in his inauguration speech, brought up issues related to his repeated criticism of South Korea for ‘free riding’ on the U.S. military in defense and Seoul’s ‘job-killing’ free trade deal with Washington. … Seoul pays about half the cost, which Trump called ‘peanuts,’ for the upkeep of 28,000 American troops.”

Despite the restrained tone, it’s not difficult to feel the stinging effect that Trump’s crude insults and lies are having on Korean people. If even a bourgeois paper like the Korea Times is appalled, you know the people in the streets are seething.