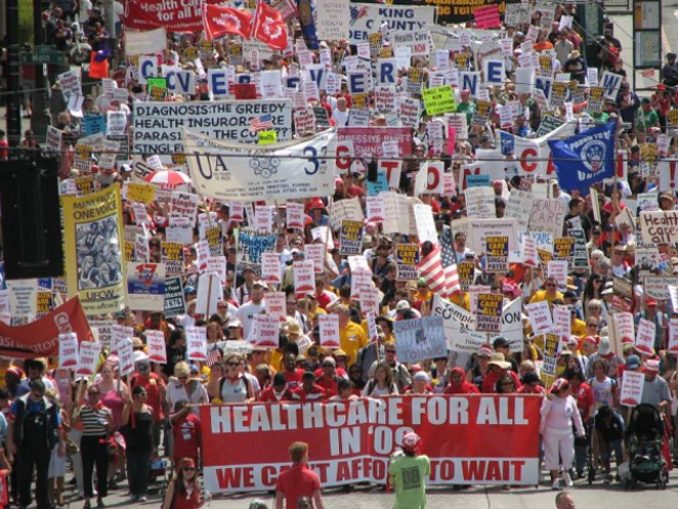 On Friday the 13th — yes, an ominously superstitious date — the U.S. House of Representatives voted 227 to 198 to start the process of repealing the Obama administration’s Affordable Care Act. All 227 were Republicans. The day before, the Senate passed a similar measure 51 to 48, also along party lines.

The public reaction was really scared. Since the Republicans have not put forward even the outlines of a bill that would replace the ACA, there is great anxiety and uncertainty about what will come next.

Some 22 million people have received health insurance under the ACA. Some who had not previously been able to afford coverage benefited from an expansion of Medicaid and other government assistance. Some had been barred from getting coverage because of preexisting medical conditions. In other words, they were very sick and, because they were sick, they were denied health insurance. That’s how this cruel, totally profit-driven system works.

Will they lose their medical coverage now? Will premiums for private insurance go up and government assistance be cut? Many horror stories could be told about uninsured people losing everything because of catastrophic medical costs.

There is much reason to worry that the blatantly right-wing, big-business gang that will now be running not only both houses of Congress but also the White House is, even before taking office, crafting a bill to help the profiteers while eliminating aspects of the ACA that allowed the rest of us to get some coverage.

Wall Street seems to like this idea. On the very day that Congress voted to dismantle the ACA, forbes.com reported that health care stocks were the best performing sector in afternoon trading.

It’s the health of profits that concerns Congress, not the health of people. These wealthy politicians and the even richer capitalists they represent see more money coming in from a smaller number of people, with or without insurance.

Not that the Affordable Care Act has been anything like a national health system that would be paid for out of public funds and guarantee inexpensive care to everyone with a minimum of bureaucracy. Most developed capitalist countries have such health systems, which have worked effectively to improve people’s health and longevity while lowering the costs involved.

Another way is possible

In socialist Cuba, they’ve gone further. Although a much poorer country than the U.S., especially after more than a half-century of the economic blockade imposed by Washington, little Cuba has a record of providing health services to its own people and to millions more, especially in Latin America, Haiti and Africa, that is astounding.

In the book “Too Big to Succeed: Profiteering in American Medicine,” California neurosurgeon Russell Andrews wrote, “The cost of health care in the United States is at least 50 percent greater than that of any of the other developed countries, despite the fact that by commonly accepted measures of effectiveness of health care (e.g., life expectancy and infant mortality), the United States ranks lower than many developing countries that spend far less on health care (e.g., Cuba).”

World Health Organization figures confirm Andrews’ conclusions. Its 2015 report on life expectancy for people born that year showed the U.S. and Cuba virtually tied at 79.3 and 79.1 years, respectively. On infant mortality, the CIA World Factbook, of all things, reports that in 2015 deaths per live births were 5.87 in the U.S. and only 4.63 in Cuba. Cuba has just announced its infant mortality rate for 2016: it’s down to 4.5.

The money spent on health care is equally striking. In 2014, the World Health Organization’s latest figures, the U.S. annual expenditure for health care per capita was a whopping $9,403, compared to just $2,475 for Cuba!

Most of the difference represents the huge profits that the current system of health care in the U.S. delivers to its capitalist owners and investors.

Fighting for socialism here is not just some pretty utopian dream. And it is not just patching up a ridiculously venal and rotting system. It is more and more becoming a life-or-death struggle as we build a movement for revolutionary change while we fight to keep and expand what little remains in social programs.

The health and futures of the vast majority of people in the U.S. are being sabotaged by lying bourgeois politicians who have built their careers either sucking up to the extremely rich exploiters or, in Trump’s case, being one of them himself. The Democratic Party, by comparison, comes on as Wall Street Lite, while the Republicans are masters of their craven subservience to big capital.

All of capitalism’s wealth comes from exploiting workers, not from “entrepreneurs” who are good at just one thing: increasing their own bottom line. Workers built it all; we are suffering from the stranglehold over the wealth that should belong to society; and we have the right to get rid of capitalism.

Let’s build a movement for revolutionary socialism to reclaim and share the wealth we have created. Our health and our very lives depend on it.