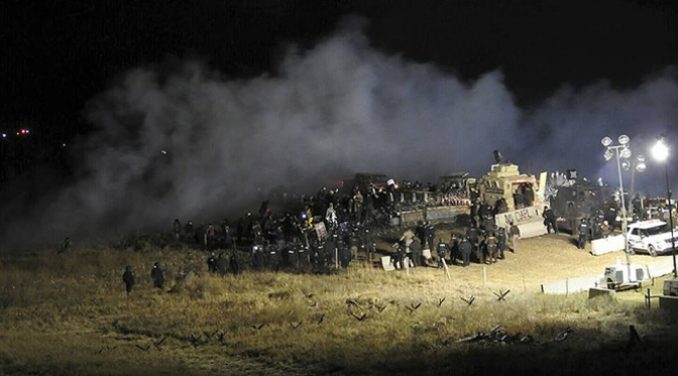 Jan. 16 — A bill introduced in the North Dakota State Legislature on Jan. 11 would give a legal green light to police, corporate goons, vigilantes and other racists to use their motor vehicles to essentially mow down protesters if they want to.

Reactionaries in the legislature who support the oil and gas industry think the law will derail the Indigenous-led protests to stop the Dakota Access Pipeline. Blocking access to roads is a time-honored people’s tactic in the history of civil disobedience and protest movements, including the #noDAPL struggle.

Part of the law states unequivocally: “Notwithstanding any other provision of law, a driver of a motor vehicle who unintentionally causes injury or death to an individual obstructing vehicular traffic on a public road, street, or highway, is not guilty of an offense.”

Indigenous leaders from many nations have denounced the bill as undemocratic, unconstitutional and an affront to their sovereignty.

Standing Rock Sioux Chairman Dave Archambault II told reporters, “The state claims they want to work closely with the tribe on repairing our relationship with them. Clearly that is not happening when legislation that impacts us is being drafted without consultation, consent, or even basic communication.” The legislature’s committee on transportation will hold hearings on the bill on Jan. 20. (commondreams.org, Jan. 16)

Water protectors, led by the people of the Oceti Sakowin (Seven Council Fires of the Great Sioux Nation) and other Indigenous nations, have “settled in” for the brutal North Dakota winter at camps of All Nations, Rosebud and Sacred Stone.

Linda Black Elk (Catawba Nation) wrote a “Message from Standing Rock Camps” in which she described the protectors who remain.

“The folks left in camp, about 500, are defiant and strong. These are the tough ones … the ones who have been sharpened by years on the front line. Many of them … are elders who have seen so many broken promises from federal and IRA [Indian Reorganization Act] governments that they are determined to stay and fight for the water, the land, the wildlife and the treaties. They are determined to stand against the continued cultural, environmental and physical genocide of Indigenous peoples.” (nativenewsonline.net, Jan. 9)

Although an administrative or executive order from the incoming Trump administration could change the landscape of this and many other struggles, the fight to stop the DAPL continues. Landowners have come together and filed a lawsuit in federal court in an attempt to stop construction on nine miles of the pipeline’s route.

The Backwater Bridge on Highway 1806, north of Cannonball, remains closed, although it has been deemed sound by experts. The bridge was closed by the state after militant clashes with police and corporate goons took place Nov. 20 where water protectors were trapped on the bridge and sprayed with water cannons, tear gas and projectiles.

More than 500 arrested protesters are still waiting for their day in court and their right to legal representation. Only two cases have been settled out of the 571 cases on the docket since August. A dearth of attorneys in the sparsely populated state has caused the wheels of justice to grind to a halt for these valiant water protectors. All charges should be dropped immediately!