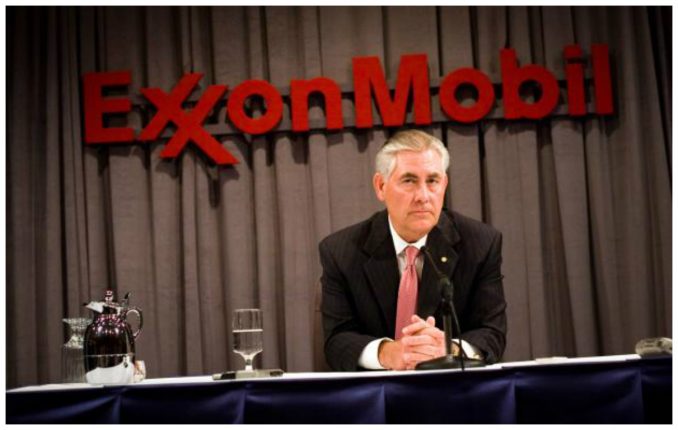 Donald Trump may like to surprise people, but he has followed exactly what previous presidents have done in selecting a secretary of state. This billionaire “celebrity” who spouted populist demagogy to get elected is not filling his cabinet with people who have felt the pain of unemployment. No, he’s picked a Rockefeller man.

Rex Tillerson, Trump’s nominee, is the former chair of Exxon Mobil. And Tillerson, true to the predatory and aggressive character of this company with huge global assets, started out by making threats to China over its build-up of some small islands in the South China Sea.

Tillerson said during his confirmation hearing on Jan. 11 that China should be told its access to the islands “is not going to be allowed” and U.S. allies in the region should provide “backup.” The reaction to this saber-rattling talk of a possible military confrontation was immediate and sharp.

Paul Keating, former prime minister of Australia, quickly issued a statement saying his country should reject such pressure: “That means no naval commitment to joint operations in the South China Sea and no enhanced U.S. military facilitation of such operations.”

What is it about the South China Sea that has Tillerson so riled up and his former company salivating? It’s not Tillerson’s claims that China is threatening the free passage of ships. That’s baloney.

The corporate news media and Exxon Mobil know what it’s all about. “The South China Sea may contain 11 billion barrels of oil and 190 trillion cubic feet of natural gas, according to the United States Energy Information Administration,” wrote the New York Times on Jan. 12.

The strategy of Exxon Mobil has been to get access to the great wealth under the South China Sea through Vietnam, one of the countries laying claim to it. On Jan. 13, Vietnam’s state-owned energy group, PetroVietnam, signed an agreement with Exxon Mobil to develop the country’s biggest gas project for energy generation.

John Kerry, the outgoing U.S. secretary of state who has called the choice of Tillerson “thoughtful” and is reported to have big holdings in energy stocks in a “blind trust,” was present in Vietnam for the signing with Exxon Mobil.

Washington’s strategy toward China and Vietnam for years has been to exploit and exacerbate the tensions between these two great socialist countries. It seems incredible that, after the horrible destruction wreaked by the U.S. on Vietnam, Laos and Cambodia, U.S. warships are now allowed to berth in Camranh Bay and diplomats like Kerry are involved in business deals between Vietnamese agencies and U.S. corporate giants. But Vietnam is a poor, developing country still suffering the terrible effects of the war and has made many compromises in order to survive.

The lowest point in China-Vietnam relations came in 1979, when China invaded Vietnam for a brief period. Progressives around the world, including Workers World Party in the U.S., condemned the invasion while supporting both countries against imperialism.

Currently, relations between Vietnam and China appear to be improving. On Jan. 14, Nguyen Phu Trong and Xi Jinping, the general secretaries of the two countries’ Communist parties, issued a joint communique at the end of a visit by Trong to Beijing. It stressed cooperation and peaceful development, especially in the “East Sea.”

Both countries are trying to move away from coal and toward less polluting energy sources. For both, the prospect of replacing coal with natural gas has great advantages. China has also pledged to spend at least $360 billion on solar and wind over the next three years to decrease its dependence on fossil fuels.

The progressive movements here have a lot of reasons to fight the Trump agenda. Stopping the billionaires’ war plans ranks along with fighting their racism, sexism, anti-LGBTQ bigotry and immigrant bashing.