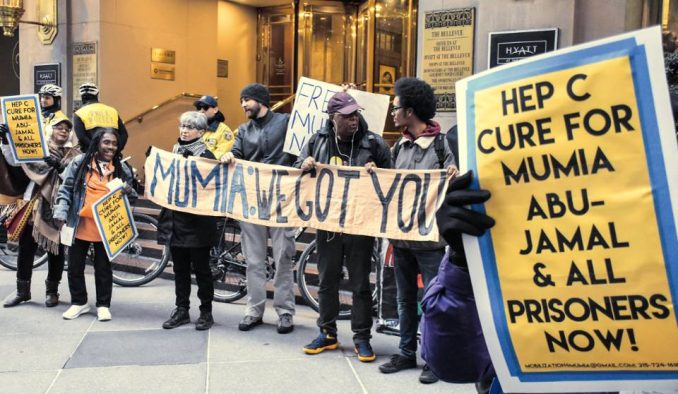 For the second time in five weeks, protesters gathered outside the Philadelphia office of Pennsylvania Governor Tom Wolf on Jan.13. They again demanded that the state’s Department of Corrections provide political prisoner Mumia Abu-Jamal and thousands of others under their jurisdiction with life-saving medications that can cure their chronic hepatitis C.

Last Dec. 9 demonstrators delivered tens of thousands of petitions to Wolf. These called on him and DOC Superintendent John Wetzel to provide prisoners with the anti-viral drugs Sovaldi or Harvoni. These drugs have proven 95 percent effective in curing hep C.

In 2015 the DOC established protocols designed to deny and delay even consideration of treatment for hep C until a prisoner was near death and no longer treatable. While the state delayed treatment, prisoners were already dying.

Federal District Judge Robert Mariani ordered on Jan. 3 the DOC to treat Abu-Jamal with the hep C cure within 21 days. In his precedent-setting ruling, Mariani called the DOC’s persistent refusal to treat prisoners with hep C “barbaric and unconstitutional.”  The ruling for Abu-Jamal would have extended to the 6,000 other Pennsylvania prisoners with the disease.

The DOC filed a notice of intent on Jan. 12 to appeal Mariani’s decision, asked for the court to “reconsider” its ruling and filed a motion for stay of the order.  The emergency demonstration on Jan. 13 was the movement’s response.

The DOC’s appeal could extend Abu-Jamal’s suffering and dangerous deterioration of health. The Centers for Disease Control and Preventiion says every person with chronic hepatitis C should be given the cure immediately.

Outside Wolf’s office Pam Africa of the MOVE organization and International Concerned Family and Friends of Mumia Abu-Jamal, said, “The DOC’s appeal is outrageous. It exposes the state’s wanton disregard for the health and life of the men and women under its care. It violates human decency.”

The DOC is arguing that medication for prisoners with the deadly hep C costs too much, and the cost should be the basis for rejecting provision of the cure.  At the rally, Dr. Suzanne Ross said publicly that Judge Mariani made it absolutely clear that the cost of the medicine cannot take precedence over the constitutional right of every prisoner with hep C to get the cure.

The 12-week treatment provided through Gilead Sciences costs as much $90,000 for one individual, Dr. Ross said, but that’s because of Gilead’s greed. Actual production of the entire treatment costs the company only $62. Even that includes a 50 percent write-up for profits.

Earlier on Jan. 13, a delegation of activists from New York and Philadelphia, including Ross, Pam Africa, Johanna Fernandez and others traveled to the DOC’s headquarters in Mechanicsburg, Pa., in an effort to meet with Wetzel. After some apparent changes, the DOC finally sent Security to ask the delegation to leave. Security said the state office was “private property” and they were trespassing.

One of Gov. Tom Wolf’s first acts when he took office in January 2015 was to place a moratorium on the death penalty in Pennsylvania.  Yet to refuse to treat a curable disease and let prisoners die due to medical neglect is really a death sentence by another means. It’s not just unconstitutional.

Mumia’s supporters urge people to continue making calls to Wetzel (717-728-2573 or 717-728-4109), telling him to immediately give the hep C cure to Mumia and all other state prisoners with the disease.