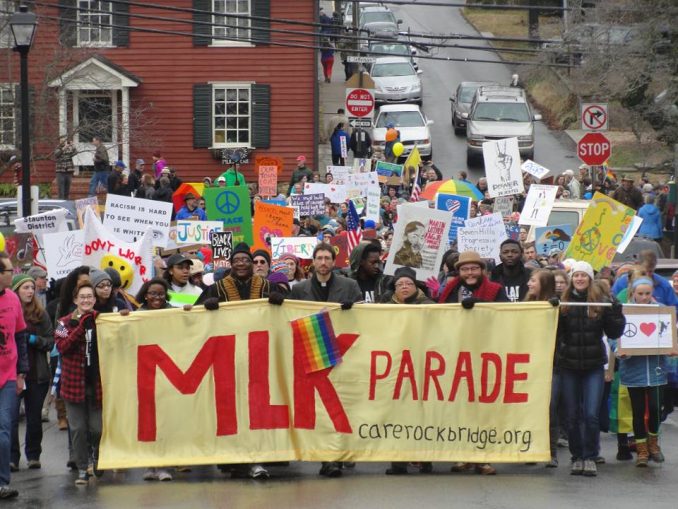 Rejecting white supremacy and embracing unity and solidarity, hundreds took to the streets on Jan. 14 in Lexington, Va., for the first-ever Dr. Martin Luther King Jr. community parade there.

“It looks like this is something the city has been waiting for for a long time. Words cannot adequately describe how things turned out on this historic day in Lexington. I think Dr. King would be pleased,” said the Rev. Reginald Early of the Randolph Street United Methodist Church, a historically Black church where the parade began and ended.

Lexington is a city of 7,000 people about two hours from Richmond, the state capital. Stonewall Jackson and Robert E. Lee, Confederate leaders who fought for the continued enslavement of people of African descent and other people of color and opposed Reconstruction, are buried there. Numerous other Confederate shrines and history abound in the city.

The Community Anti-Racism Education Initiative, which sponsored the parade, formed in March in response to racist Klan literature distributed in some Lexington neighborhoods. CARE organized a rally of more than 300 last spring in response to the Klan leaflets and subsequently has held events in solidarity with Black Lives Matter, a vigil for the victims at the Pulse nightclub in Orlando, Fla., and other events.

In the months leading up to the parade, CARE organizers courageously stood up to a variety of threats. These came from the Sons of Confederate Veterans, “Flaggers” and other white-supremacist organizations.

For years, these groups have held parades on the Saturday of Virginia’s official “Lee-Jackson” weekend, with hundreds of Confederate flag-waving racists menacing the city and boycotting local small businesses. Thus the white supremacists thought they “owned” this Saturday before the Dr. King federal holiday.

CARE put in a permit for the Dr. King Day parade months in advance and fought every step of the way to the event on Jan. 14. In contrast to Confederate regalia, a sea of hundreds of community members took to the streets of Lexington. A massive lead banner was held aloft by a diverse array of participants, including union members and people from the faith-based, LGBTQ, student, youth, women’s and people-of-color communities.

A rainbow of multinational contingents and individuals joined in, filling numerous city blocks with banners, signs, songs and chants imbued with the spirit of Dr. King’s dream and hope to build a people’s world. These included soccer teams and individual players holding such signs as “Give Racism the Red Card”; the Southwest Virginia LGBTQ History Project; 15 Now and Fight For $15 from Roanoke, Va.; Quakers; the Coalition For Justice from Blacksburg, Va.; Black Lives Matter; Peoples Power Assemblies; Workers World Party; and numerous others. A variety of slogans, including “Living Wage, Jobs Not Racism” and “Unite Against State Violence,” were on signs and banners.

Participants resoundingly rejected the glorification of a history rooted in slavery and genocide, and they sent a clear message that the fight against hate and bigotry in Lexington and everywhere will continue.

The emphatic verdict of parade participants — both Lexington community residents and the many that traveled from a variety of cities and states — is that the parade was direly needed, especially in this period and in order to build relationships for future events, campaigns and movements, such as the Jan. 20 Counter-Inaugural protests and the Jan. 21 women’s protests in Washington, D.C., and worldwide.

“A million thanks to this community and everyone who came in solidarity from as far away as York, Pa. This is what people power looks like,” said CARE leader Robin LeBlanc.

The day concluded with remarks by keynote speakers: the Rev. Michael A. Turner and Dr. Ted Delaney on the theme “Remembering MLK, His Life and Legacy” at the Randolph Street United Methodist Church.

In his sermon on the morning of Jan. 15,  CARE leader and pastor Lyndon Sayers, of the Good Shepherd Evangelical Lutheran Church in Lexington, said: “Yesterday we sang songs of love. We sang them in new ways, we did things differently than before yesterday. Yet, I also saw that so many of us are afraid, afraid of violence, afraid of speaking out, afraid of living in a broken and profoundly violent world.

“It is very easy to be afraid. It is logical to be afraid in such a broken world. But rather than live in a constant state of anxiety and fear, we can choose to tap into something larger, something more hopeful than us. That doesn’t change structural oppression, and we can’t wish away the institutional violence that surrounds us. But we can find solace in this new song.”

Added Sayers: “There is work to do. We here in this city, in this country have a task ahead of us, to tackle systemic oppression and brokenness, while also finding solace and hope that we can’t do this alone. We are loved, we are not alone. We can do this together.”