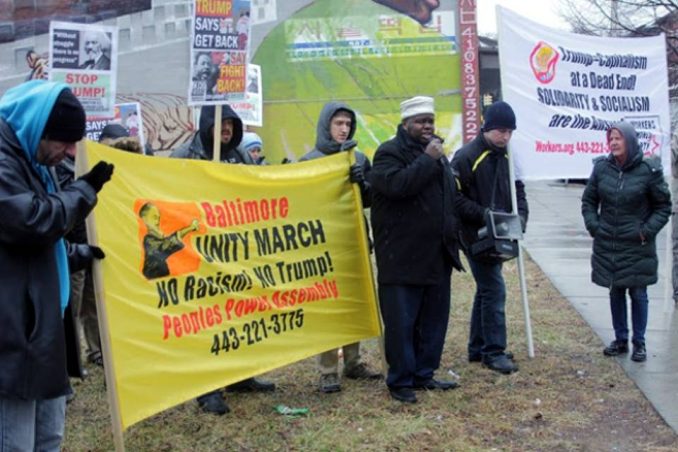 The Rev. C. D. Witherspoon, a leader of the Baltimore People’s Power Assembly, and former president of the Baltimore Southern Christian Leadership Conference, speaks to the Unity March on Jan. 14.

Less than 24 hours after the Senate took the first steps towards utterly obliterating health care for vulnerable U.S. residents, community activists assembled in the sleet-slick streets of Baltimore, beneath darkening skies, to kick off the fight against the latest reactionary administration: that of billionaire fascist Donald Trump.

The Unity March, organized for Jan. 14 by Workers World Party and the People’s Power Assembly, commemorated the birthday of Dr. Martin Luther King Jr. by challenging the encroachment of Trumpist policies of reaction on the national and local levels.

“We’re fired up in Baltimore because we understand that the Donald Trumps that we experience, that we have to contend with, don’t just exist in Washington, D.C.,” said the Rev. Cortly “C.D.” Witherspoon, a prominent organizer and activist with the PPA. “We know that there’s a Trumpist ideology that exists right here in the city of Baltimore.”

The march traced a route down Maryland Avenue toward the historic Lexington Market, a hub of Baltimore’s African-American community, considered by many to be a symbol of authenticity within the city. Now, the Market is slated for gentrification, to be torn down and replaced with an outlet for corporate chains and petty-bourgeois storefronts. “Our families had been supporting Lexington Market long before the business interests were interested in downtown Baltimore,” said Witherspoon. “Even today we see that there is a food desert right here in the city of Baltimore, and they have the audacity to try to gentrify our city, but not for us. We know that they want to gentrify Baltimore City for the business interests.”

The city and business interests have attempted to associate Lexington Market with violent crime and drug abuse in an effort to obscure the systemic oppression of Baltimore’s poor and working class — oppressions they share with the most vulnerable populations across the country and the world under the auspices of global capitalism.

Gentrification is not the answer. As Rev. Witherspoon said: “They’re not building a Baltimore city for the poor. They’re building it for the corporate CEOs.”

The march was met with opposition from the Baltimore police, who attempted to silence the activists with fabricated concerns about permits for audio equipment. Sharon Black, a member of WWP, noted the insidious implications of this type of police behavior and the threat it poses for free expression. “Our permit is our rights,” she said, staring down the line of squad cars that trailed the march down Maryland Avenue. “When we talk about ‘Trumpist policies,’ this is what we mean. When Trump gets elected, the police terror starts.”

The resilience of the demonstrators in the face of weather and police forces served as certain proof of the commitment to resistance against policies of oppression of all kinds. “It’s really very important that we be out here today, in what some may consider to be inclement weather,” Witherspoon noted. “But how many of you know that there’s inclement weather in Washington right now? And if we don’t get used to being able to weather the storm, and being able to weather the elements now, then we’ve got trouble coming on the 20th of January.”