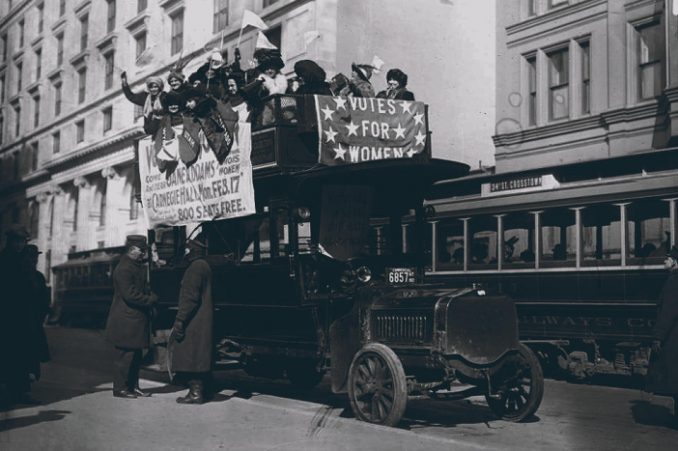 The 1973 counterinaugural demonstration, coming at a sensitive moment in the Vietnam War, was one of many protests that focused on a president’s first day in office. Historically, the first protest at a president’s swearing-in appears to have been led by a group of unemployed workers who attempted to break into the march for Franklin Pierce’s Inauguration in 1853.  They were dispersed by the cops and arrested.

The next big counterinaugural protest was at Woodrow Wilson’s first Inaugural in 1913. Demanding the right to vote, 8,000 people, nearly all women, came from all over the country. They paraded on March 3, a day before the March 4 Inauguration. Reactionary men who had come to the District of Columbia early attacked the marchers. Even though the marchers had a permit, cops refused to stop the attacks and joined in the insults. About 100 marchers needed hospital care.

Earlier, in January 1968, an offensive of the National Liberation Front of Vietnam against the U.S. occupying army — known as the Tet Offensive since it began on Tet, the country’s new year holiday — imposed a major political defeat on the U.S. strategy. Heavy casualties among U.S. troops caused a major change in public opinion. It also deepened opposition to the war among the rank and file within the U.S. military.

The Tet Offensive and the war in general had a big impact on the election campaign, as President Lyndon Johnson stepped back at the end of March, saying he would not run for re-election.

There were widespread demonstrations against the Vietnam War, particularly but not exclusively on university and college campuses. Violent confrontations between police and anti-war protesters occurred at the 1968 Democratic National Convention in August, at which this reporter was arrested.

The election was a three-way contest between Republican Richard Nixon, Democratic Vice President Hubert Humphrey and the racist governor of Alabama, George Wallace. Nixon won with only 43 percent of the popular vote.

While the anti-war movement had differences on how to respond on Inauguration Day, a varied, spirited, some times satirical, sometimes confrontational series of protests were planned and carried out during the inauguration period. 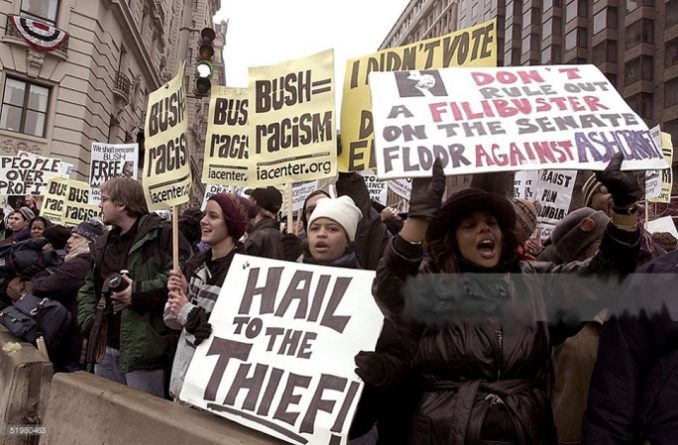 The day of Nixon’s inauguration, several hundred people gathered in Franklin Park and were joined by many others during a march from the park to Pennsylvania Avenue, where the inauguration parade was scheduled.  Several skirmishes with police along the way resulted in arrests.

Demonstrators gathered in the widest spot along Pennsylvania Avenue, between 14th and 15th streets, where the parade would turn to go to the White House reviewing stand. While waiting for the parade to pass, cops and protesters skirmished, especially when protesters burned U.S. flags that the Boy Scouts were handing out. Another group of 1,000 protesters across Pennsylvania Avenue was less confrontational.

As the presidential limousine approached 12th Street, several smoke bombs were thrown at it. At 14th Street, the official count was twelve hard projectiles and many softer ones such as tomatoes and tin foil.

After the presidential car passed, some of the protesters on the north side of the street tried to get near the reviewing stand and others were chased by the cops as numerous small demonstrations broke out throughout downtown Washington.

The assessment of the large contingent of members of Students for a Democratic Society — one of the leading youth anti-war organizations at the time — who participated in this confrontation was that we had made a major statement that U.S. youth opposed the war and Nixon with such vehemence that we surprised the cops and the government.  It was a major success.

Nixon’s Democratic opponent in the 1972 election was George McGovern, a Democratic senator from South Dakota. Considered an anti-war candidate, McGovern had limited support from the Democratic Party.

By 1972, the U.S. troop level in Vietnam had dropped, under Nixon, from 540,000 to less than 100,000. The U.S. was openly negotiating with the Vietnamese for a peace treaty. Wallace had been eliminated from the election when an attempted assassination left him paralyzed from the waist down. Nixon won with over 60 percent of the popular vote and 520 electoral votes to McGovern’s 17.

The United States and Vietnam had engaged in years of diplomacy, which ended in an October 1972 agreement. Elements in U.S. ruling circles resisted this treaty, as it amounted to recognizing U.S. imperialism’s strategic defeat. Beginning in early December 1972, Nixon ordered an intensive bombing campaign, attempting to force the Vietnamese to accept terms more favorable to Washington.

The anti-war movement –including the National Peace Action Coalition and the Peoples Coalition for Peace and Justice, SDS, Vietnam Veterans Against the War, Clergy and Laity Concerned and Youth Against War &  Fascism — responded with a series of demonstrations against war and racism, including a protest on Christmas Day 1972 in front of the White House, demanding, “Sign the Treaty Now!”

Some 100,000 people who came to Washington on Jan. 20, 1973, gathered in the National Mall and lined the inauguration route to demand an end to the war and racism and that the treaty be signed. The treaty was signed seven days later in Paris.