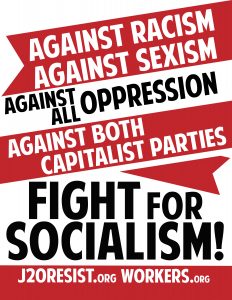 Six-year-old Toussaint Birwe was killed by a 14-car State Department convoy that barreled through his hometown of Mokong in the African nation of Cameroon on April 18, 2016.

The motorcade, carrying armed-to-the-teeth Navy SEALs, didn’t even stop. It was carrying that great defender of human rights, Samantha Power, the U.S. ambassador to the United Nations.

Power was in Cameroon as part of U.S. imperialism’s “tilt toward Africa.” In 2014, the Pentagon carried out 674 military operations in that continent. (The Nation, April 15, 2015)

To the generals in the U.S. African Command — Africom — Toussaint Birwe’s death was just “collateral damage.”

That’s more than the $120 that Vietnamese families got when their children were killed by U.S. armed forces. Meanwhile, the Pentagon paid Michelin $600 for each rubber tree it destroyed during its carpet bombing of Vietnam. (vvaw.org/about/warhistory.php)

The U.S. government refuses to pay any compensation to the hundreds of thousands of Vietnamese people suffering from Agent Orange, which was sprayed by U.S. planes,

As Michael Jackson’s song pointed out, “They don’t really care about us.”

These workers labored in 12-hour shifts and many were poisoned by asbestos. Hired by a contractor for Trump, they were cheated out of wages and spent nearly 20 years in the courts to get any justice. (New York Times, June 14, 1998)

Rich people have been running over poor children since the days of chariots.

It was a common occurrence in France before the French Revolution. Charles Dickens wrote about it in “A Tale of Two Cities.”

A passage in that book reads: “With a wild rattle and clatter … the carriage dashed through streets and swept round corners, with women screaming before it, and men clutching each other and clutching children out of its way. … At last, swooping at a street corner by a fountain, one of its wheels came to a sickening little jolt, and there was a loud cry from a number of voices, and the horses reared and plunged. …

“‘What has gone wrong?’ said Monsieur, calmly looking out. …

“‘Pardon, Monsieur the Marquis!” said a ragged and submissive man, ‘It is a child.’…

“‘It is extraordinary to me,’ said he, ‘that you people cannot take care of yourselves and your children. One or the other of you is forever in the way. How do I know what injury you have done my horses. See! Give him that.’

“He threw out a gold coin for the valet to pick up, and all the heads craned forward that all the eyes might look down at it as it fell. The tall man called out again with a most unearthly cry, ‘Dead!’”

At least the Marquis was forced to stop. The State Department motorcade didn’t even do that for the African child it killed, although Ambassador Power was compelled to come back later.

It was Ambassador Power who arrogantly asked, “Are you truly incapable of shame?” speaking of Syria, Iran and Russia in the United Nations Security Council after Aleppo was liberated. Mass graves of people tortured to death by U.S.-backed terrorists were found afterwards. (CBS, Dec. 26, 2016)

Another motorcade that “dashed through streets” killed a Black child in the Crown Heights neighborhood of Brooklyn on Aug. 19, 1991. The caravan was carrying Rabbi Menahem Schneerson, the late head of the right-wing, racist Lubavitch religious cult, and was preceded by a police car.

The last car ran through a red light and struck two Black children, killing seven-year-old Gavin Cato. A volunteer ambulance that arrived didn’t help Cato, but instead took the driver of the car that struck him. (New York Daily News, Aug. 13, 2016)

Schneerson instructed his followers not to rent to people who weren’t Jewish. (Jewish Press, July 20, 1990) In Crown Heights that means not renting to Black people.

Millions of Jewish people are rightfully concerned about neo-Nazi support for Donald Trump. But unlike the great majority of Jewish voters, most Lubavitch followers supported him. (DNA.info, Nov. 16, 2016)

Charles Dickens made sure the fictional Marquis got justice. Dickens wrote that the slain child’s father put a knife through the aristocrat’s heart and left a note reading, “Drive him fast to his tomb.”

We need to drive a stake through capitalism’s putrid heart. Fighting Trump is a start. All out for J20!