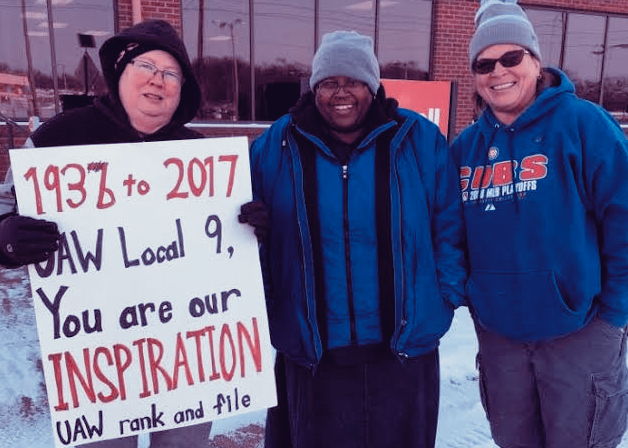 South Bend, Ind. – On Jan. 5, autoworkers from Detroit and Chicago traveled to South Bend, Ind., to show solidarity with Honeywell workers who have been locked out by the Honeywell bosses since May 9.

On May 9, with no advance notice, over 300 Honeywell workers in South Bend and about 50 workers in Green Island, N.Y., were escorted out of their plants in the early morning hours and locked out. This act of corporate terror occurred two days after workers in these two former Bendix brake plants overwhelmingly rejected a contract that tore up 80 years of hard-fought gains.

In November, the company tried to shove the same offer down the workers’ throats again. Local 9 members were now weeks away from running out of unemployment benefits but an overwhelming majority voted “no.” They would not accept the runaway health care costs that would eat away at their paychecks and effectively reduce the hourly rate for the lowest paid to below $15. An attack on seniority rights was one of several other big issues. The membership suspended the local’s president after he tried to convince the workers to vote “yes.”

Workers are angry that executives and shareholders, themselves rolling in dough, would deny the basic right to health care. Honeywell is a major defense and aerospace supplier with billions of dollars in Pentagon contracts and over 65 plants worldwide. The company, number 75 on the Fortune 500 list, made almost $5 billion in profits in 2015. CEO David Cote was rewarded with over $25 million in salary and other compensation. “Never has a company that soars in profit descended so swiftly and calculatingly for more profit on the backs of its longtime loyal union workers,” UAW Vice President Jimmy Settles wrote in a Detroit News op-ed piece.

Workers spoke at length about their uphill battle at the Jan. 5 meetings. “All you have left in this contract is wages,” Vice President Todd Treder explained. “If we take this now, what do you think they’ll be coming after next time? Your wages.” The company wanted another vote on the same bad offer right before Christmas. The local leadership refused.

“We are ground zero,” one of the members commented. Honeywell workers, the only UAW members currently locked out, are fighting for the union’s future. The UAW International, along with Region 2B, which includes Indiana, needs to mobilize labor and community solidarity. Workers at the meetings expressed frustration with the bureaucracy.

Local 9 thanked Autoworker Caravan as well as Local 551 from the Chicago Ford plant for its consistent solidarity. “Fundraising is important,” a Chrysler worker commented. “When they are trying to starve you out a full pantry is a weapon.”

Members of UAW Local 9 are proud of their struggle legacy. The self-published book, “We of Bendix Local No. 9,” explains the critical role Local 9 played in U.S. labor history. The Nov. 17-23 Bendix sit-down in 1936 was the first for the UAW. “Order and discipline were maintained within the plant, members fed, families in distress were helped, amateur shows put on, parades, religious services, and an agreement for settlement was finally reached. … Bendix Local 9 had won a tremendous victory!” Bendix dissolved the company union and recognized the UAW. This paved the way for victories at General Motors, Chrysler and others.

Over the years, Local 9 fought many battles and won many gains. In the early years, the union fought to get women paid the same hourly rate for the same exact job as men. Today, Local 9 is just as united in its fight for health care and contract justice.