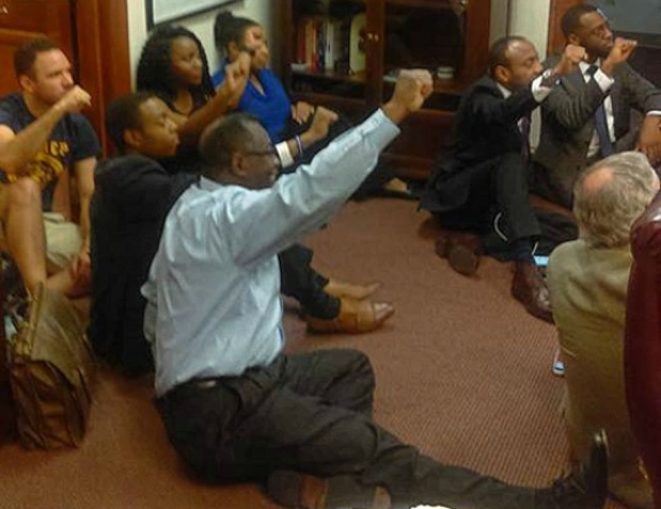 Two dozen members of the Alabama NAACP occupied the office of U.S. Sen. Jeff Sessions in Mobile, Ala., on Jan. 3. Protests were also held at other Sessions’ offices in Alabama. The NAACP actions kicked off resistance to the far-right-wing Cabinet proposed by president-elect Donald Trump.

Sessions, the Republican senator nominated to be U.S. Attorney General, was rejected for a 1986 federal judgeship when former Justice Department colleagues testified to his racist comments and behavior when serving as U.S. district attorney in Mobile.

During the occupation, six African-American and white protesters were arrested, including Cornell William Brooks, national NAACP president, who said the occupation was “an act of civil disobedience standing in the tradition of Rosa Parks.”

Bernard Simelton, Alabama NAACP president also arrested, stated the group would have acted even if Sessions had never made his statements. “He has not been a champion for civil and human rights.”

This is an understatement about the political record and beliefs of Jefferson Beauregard Sessions III, named like his father and grandfather for Jefferson Davis, president of the Confederate slavocracy, and P.G.T. Beauregard, a Confederate general.

Born in Selma, Sessions was educated at then-segregated, all-white Wilcox County High School and all-white Huntingdon College. Wilcox County, with 72 percent African-American population, is still the poorest county in Alabama because of the economic consequences of enslavement and apartheid-like conditions that persist.

Sessions has continued to hold to segregationist patterns, including hostility to the 1965 Voting Rights Act prohibiting racial discrimination at the polls, which he called as “an intrusive piece of legislation.”

In 2013 a Supreme Court decision nixed a core provision requiring Justice Department approval to change election laws in places with discriminatory histories. In the Times article, Sessions called that “good news … for the South.” That meant in coded language “good for the white South.”

Sessions’ attack on African-American voting rights was most dramatically revealed in his 1985 prosecution, as U.S. District Attorney, of the “Marion Three.” These were Black community activists tried for so-called “ballot-fixing.”

One activist, Albert Turner, had been an adviser to Dr. Martin Luther King Jr. and one of the Selma marchers attacked by state troopers. Sessions’ case fell apart in trial as voter after voter testified to the activists’ innocence.

Sessions has fought to keep additional state money from going to schools in poor districts. He has supported reviving chain gangs of Alabama prisoners. He has declared same-sex marriage a threat to “American” culture and gone to court to deny funding to LGBTQ student groups. He revealed his anti-woman bias when he said that Donald Trump’s videotaped boasts of sexual assault were not technically illegal.

Sessions is OK with the Christian nationalist bias of an Alabama judge who illegally posted the Ten Commandments in his courtroom. Sessions is also OK with Trump “building a wall” against Latinx immigration and banning Muslims from entered the U.S.

In 2015, Sessions was chosen as annual Keeper of the Flame by the Center for Security Policy, a Washington, D.C., think tank promoting anti-Muslim conspiracy theories.

Wayne Flynt, professor emeritus in Auburn University’s Department of History, has followed Sessions’ career for decades. Flynt says, “His whole life, [Sessions] has been on the wrong side of every issue.” Senate hearings on nomination of Sessions to supervise “justice” as U.S. Attorney General began Jan. 9. (NY Times, Jan. 9)