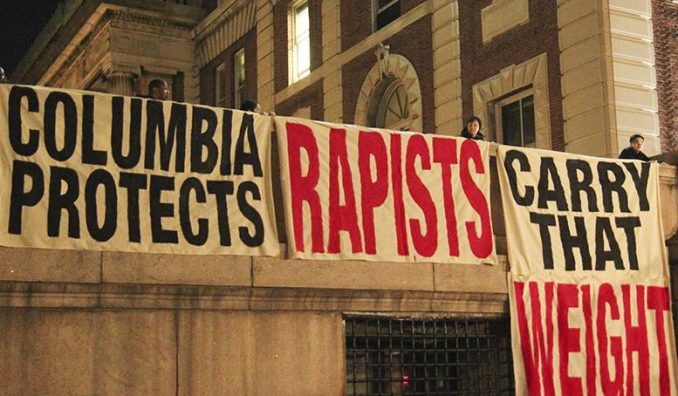 Bulletin: On Dec. 19, Judge Aaron Persky, who had sentenced rapist Brock Turner to only six months in jail after Turner was found guilty on three counts of sexual assault, was cleared of “misconduct” by the California Commission on Judicial Performance. Turner is a white Stanford U. swimmer and Persky a Stanford alumnus.  Turner is out on three years probation after only three months in jail.

The oppression of women impacts every institution under capitalism. This has been true since the evolution of class divisions — the haves and have nots — thousands of years ago. It was class society that gave birth to patriarchal ideas and attitudes, including the objectification and dehumanization of women from birth to death.

This oppression manifests itself in many ways, transcending nationality, sexual identity, age and class. Even prior to the campaign of the openly misogynist, racist, xenophobic president-elect, sexual assaults, including rape, were on the rise in disturbing numbers, especially on college campuses.

It is no accident that there is a direct correlation between sports and rape on campuses. The sexual assault of women by male athletes is part of a sickening culture shielded by college administrations, including presidents and booster clubs, in order to maintain the “integrity” of sports. What is actually being maintained are the obscene millions of dollars that college sports garner annually from ticket sales and TV revenue.

For example, during the two-week “March Madness” tournament, which crowns the winner of men’s basketball in the Division I National Collegiate Athletic Association, at least $1 billion annually will be shared among participating schools. The lion’s share goes to those that reach the Final Four. Not one penny of this revenue goes to the unpaid players.

When women are assaulted by athletes, they have to confront not only the assailant if they choose to, but also powerful forces backing these assailants.

Take the Minnesota Gophers football team that had threatened to boycott the Holiday Bowl game on Dec. 27 to protest the suspension of 10 teammates accused of gang-raping an inebriated woman on Sept. 2.

The Gophers’ coach supported the players’ actions without mentioning one word about the victim’s accusations. A Title IX investigation is now underway. Title IX is an extension of the Education Amendments Act of 1972, a federal law stating: “No person in the United States shall, on the basis of sex, be excluded from participation in, be denied the benefits of, or be subjected to discrimination under any education program or activity receiving Federal financial assistance.” (TitleX.info)

If the survivor of this heinous crime decides to bring charges against the Minnesota players, she will have to face not only her accused assailants but their influential supporters — not to mention the biased, anti-woman nature of the capitalist courts. For many survivors, the choice is either to suffer in silence or to be shamed and humiliated in public.

And then there is Joe Mixon, a star running back with the powerful Oklahoma Sooners, suspended for one year for punching a fellow woman student so hard she suffered four facial fractures. The incident took place in 2014, but the videotape was released Dec. 16, 2016 — two years later.

The Sooners’ coach, Bob Stoops, along with the athletic director and university president, saw the videotape in 2014 but decided behind closed doors that a one-year suspension was enough for Mixon, in his first year of eligibility as a player.

Mixon, who is Black, accused Amelia Molitor, who is white, of hurling racist epithets at him and initiating the assault. Whether true or not, the responsibility was on Mixon to immediately walk away — period, end of story — not to viciously punch a woman who, by physical comparison, was diminutive to him.

Why didn’t the Oklahoma coach and administration permanently suspend Mixon? Could it be they were more concerned about protecting a sports program ranked eighth in a list of the most profitable college football teams during the 2014-15 season? (kickoutthecoverage.com)

Baylor University was forced to fire its football coach, Art Briles, for covering up a 2014 sexual assault by one of his football players. Baylor defensive end Sam Ukwuachu, eventually found guilty of two counts of sexual assault, was allowed to stay with the team right after the incident. Ukwuachu had a history of abuse against women when he was at Boise State in 2013.

According to Sports Illustrated, “ESPN’s Outside the Lines reports several instances in which Baylor ‘either failed to investigate, or adequately investigate, allegations of sexual violence.’ School officials at times ‘did not provide support to those who reported assaults.’ In one instance, Baylor took more than three years to comply with a federal directive to hire a full-time Title IX coordinator, receiving the directive in April 2011 and not hiring a coordinator until fall 2014.” (si.com, May 26)

Protests against rape culture are spreading on campuses. It will be a major focus of the upcoming women’s march, J21, against Trump on Jan. 21 in Washington, D.C., and an important national step forward for women of all nationalities to unite and resist misogyny in all its forms.