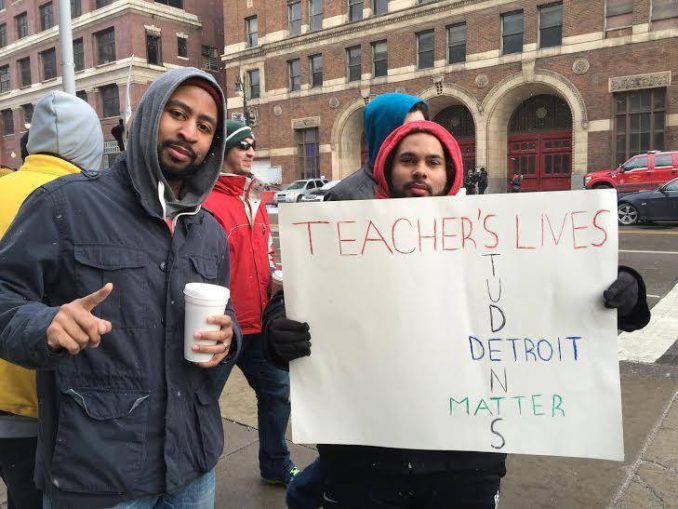 Detroit community members support their teachers at a February rally in Michigan.

Right-wing Michigan lawmakers introduced several bills attacking teacher unions during the final weeks of the 2016 state legislature. The bills died, however, after the Senate declined to take them up for a vote. The statewide chapter of the American Federation of Teachers credits the victory to a mass member mobilization, carried out in concert with the Michigan Education Association and the state AFL-CIO.

One of the bills would have forced teachers hired after July 1, 2017, off the traditional pension plan — the Michigan Public School Employees Retirement System — and into a 401k savings plan. Another would have cut funding for MPSERS by not contributing for the hours teacher union representatives spend conducting union business.

Senate Bill 280 would have prevented unions and school administrators from negotiating to pay teachers for time in labor-management conferences. The AFT pointed out that this would hurt children, as many of these meetings focus on improving educational quality.

State Rep. Gary Glenn — who also leads the state chapter of the anti-LGBTQ American Family Association — had the bill amended to prohibit community colleges from deducting union dues from employee paychecks. As the AFT points out, “The cost to employers for deduction of union dues is negligible. This legislation is merely an attempt to limit the ability of local unions to function.”

The AFT also warned that legislators were talking about amending the tax code to let the state raid the School Aid Fund to finance income tax refunds — which currently are paid out of the General Fund.

None of the heinous bills made it onto the State House floor. Members of the AFT sent over 22,000 emails, made over 4,000 phone calls and forcefully lobbied legislators at the State House and in their home districts. Retired members played a big role in the campaign.

Since Gov. Rick Snyder took office in 2011 there has been a rash of anti-labor bills. Many, including the bill making Michigan a “right-to-work” (for less!) state, come out of think tanks led by Amway President Doug DeVos.

The DeVos family is Michigan’s version of the reactionary billionaire Koch brothers. Betsy DeVos, spouse of previous Amway president Dick DeVos, is a major promoter of charter schools and Trump’s nominee for secretary of Education.

The defeat of these latest bills was a great victory for teachers and students. A new, right-wing legislature, emboldened by the Trump election and the DeVos appointment, takes over in January. Unions, teachers, students and communities need to stay mobilized — not only for phone and email blitzing but also for street action.