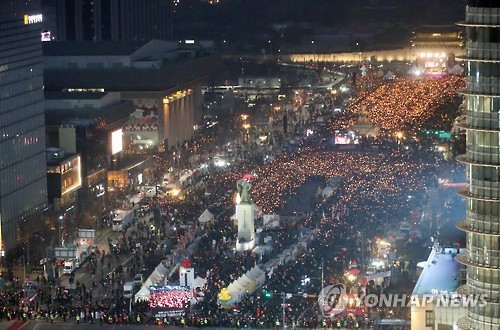 A major political crisis is shaking south Korea, but you would barely know it if you depend on the corporate media for your news.

The president, Park Geun-hye, was impeached by an overwhelming majority of the south Korean legislature on Dec. 9. The vote came after two months of demonstrations calling for her resignation, with an estimated 2.1 million people turning out the Saturday before the vote. Since the impeachment of Park, the demonstrations have continued, with a reported 300,000 rallying in Seoul alone on Dec. 17.

The president and her right-wing backers are contesting the impeachment. The forces behind her — including some of the biggest corporations in south Korea — are dragging out the process with appeals that could take a year and a half.

The U.S. government has not publicly acknowledged the impeachment. The U.S. media, taking their cue from the billionaire ruling class here, are saying very little about it, but the strategists for imperialism are deeply concerned.

The U.S. military has occupied south Korea since the end of World War II. Since the Korean Revolution, which began during Japanese colonial rule and liberated the north in 1945, followed by the victory of the Chinese Revolution in 1949, the imperialists have focused on militarizing south Korea. They installed a string of dictators, including Gen. Park Chung-hee, father of the now-impeached president, who led a military coup in 1961 and ruled with an iron hand until 1979.

Gen. Park showed his allegiance to the Pentagon by sending 300,000 Korean soldiers to fight in Vietnam in the 1960s. He became so hated that he was assassinated by the Korean Central Intelligence Agency, to be replaced by another general, Chun Doo-hwan.

With such a deep military investment in south Korea, one can be sure that the current turmoil there is of great concern to the Pentagon and Wall Street. Indeed, one of the few newspapers to devote any space to the impeachment is the Wall Street Journal, whose headline on a Dec. 9 article read: “South Korea Impeachment of President Park Is Latest Hit to Global Political Order; Likely successors to President Park take different views on ties with Washington, free trade and big business.”

The article says that the impeachment “brings the prospect of a new government for one of the U.S.’s closest allies that could have a skeptical stance toward Washington, a softer line on Pyongyang and a friendlier approach to China.”

So the leading newspaper for the U.S. ruling class is warning its well-heeled readers that their domination over south Korea is being challenged by this immensely popular political movement.

The immediate reasons for the impeachment center on corruption on a grand scale. Park and a friend, Choi Soon-sil, control foundations that received big donations from corporate heads who were pardoned by the president while facing jail for economic crimes.

According to the Dec. 5 Wall Street Journal, “Park has pardoned top executives convicted of crimes, for example, Chung Mong-koo, chair of Hyundai Motor Group, sentenced to three years for embezzlement, pardoned without serving any time. One of the foundations allegedly controlled by Choi was funded by 15 of South Korea’s largest conglomerates. The chairmen of Samsung, SK, Hanwha, Hyundai Motor and CJ groups have all been pardoned in the past decade.”

This scandal comes on top of huge attacks on the working class and other policies extremely offensive to the Korean people.

During a more liberal period starting in the 1990s, workers in south Korea had the world’s highest rate of unionization. Today, after years of anti-labor measures and physical attacks on the union movement, along with the implementation of part-time and precarious labor, only one-tenth of the workforce is organized.

In 2014, thousands of workers struck for three weeks in the longest strike in the history of Korail, the national railroad operator. The strike was provoked by a government restructuring plan that threatened privatization of the railroads, with loss of jobs, benefits and services. It quickly developed into one of the sharpest recent worker-government conflicts and was supported by the Korean Confederation of Trade Unions.

Korail fired more than 4,000 workers on Dec. 9, 2014, and announced a plan to hire 660 strikebreakers. President Park ordered an attack by hundreds of police on the rail union’s headquarters and arrested 10 union leaders on Dec. 16.

On July 4 of this year, Han Sang-gyun, president of the KCTU, was sentenced to five years in jail for leading protests against Park’s repressive labor policies.

At the same time as the 2014 railroad strike, the Park regime banned the only real opposition party, the United Progressive Party, arresting some of its leading members and ejecting its five elected deputies from the national legislature. The party was reported to have around 100,000 members and supported the reunification of the divided Korean nation.

Like her father, Park used the National Security Law to suppress freedom of speech and send to jail those demonstrating for reunification and against U.S. occupation and repressive government policies.

This July, the Park regime announced it would let the Pentagon deploy a Terminal High Altitude Area Defense battery in the country’s southeast, aimed at both China and the Democratic People’s Republic of Korea in the north. Farmers at the proposed THAAD site have continued protests every night since then.

Also unpopular is the Park government’s push to sign a military intelligence pact with Japan, the country’s former colonial ruler, again at the instigation of the U.S., which has invited Japan into its military “exercises,” aimed in recent years at the DPRK.

The U.S. government is acting low-key about the current turmoil in south Korea, but there can be no question that it is working feverishly behind the scenes trying to shore up both the military and the ruling class there against the popular masses.