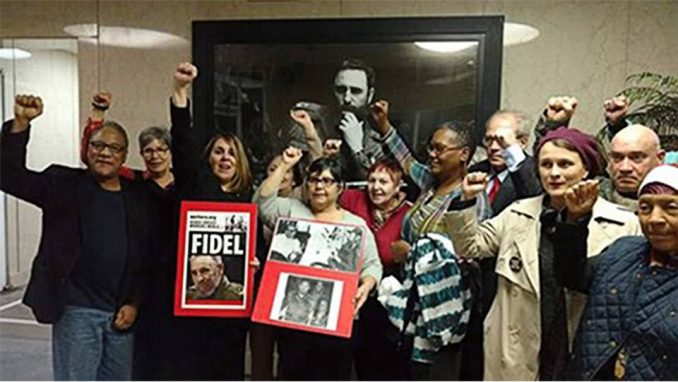 Cuba’s nine-day, islandwide farewell to Fidel Castro ended Dec. 4 in Santiago de Cuba on the island’s southwest tip. The ashes of the undefeated historic leader of the Cuban Revolution were placed into a large granite boulder by Cuban President Raúl Castro. A simple black marker with gold letters FIDEL sealed the enclosure.

Fidel’s death on Nov. 25 coincided with the 60th anniversary of when 82 revolutionary fighters led by Fidel sailed in the yacht The Granma from Mexico to launch an armed struggle that liberated Cuba from the U.S.-backed Batista dictatorship. The memorial activities reviewed the history of the Cuban Revolution, which is synonymous with Fidel himself.

Although Fidel was 90, and had noted at the 7th Congress of the Communist Party in April that it was likely the last time he would address them, his death evoked tears, tributes, pledges and the cry, “Yo soy Fidel” (I am Fidel). As the depth of support for the Cuban Revolution became clear in the outpouring for Fidel, the vicious pronouncements parroted by capitalist media at the initial announcement of his death became muted. There would be no counterrevolutionary uprising.

Cubans streamed to the Jose Martí Memorial in Havana to express their condolences and pledged to support the revolution.

On the evening of Nov. 29, world leaders gathered with the Cuban people filling Havana’s Revolution Square. Just weeks after the second anniversary of the announcement that the U.S. and Cuba intended to resume diplomatic relations, the Barack Obama administration did not send an official delegation to the memorial.

Speakers at the public memorial in Havana showed Cuba what Fidel Castro’s leadership had meant, especially for Africa, the Caribbean and Latin America. Amid remembrances and history, speaker after speaker condemned the continuing U.S. blockade of Fidel’s homeland.

From Havana to Santiago, a Freedom Caravan retraced in reverse Fidel’s victory caravan after the Jan. 1, 1959, revolution ousted the brutal U.S.-backed Batista dictatorship. As in 1959, the caravan demonstrated the revolution’s close ties with the masses of Cuba. Everywhere the streets were lined with people of all ages paying their last respects, recording the passage of the caravan on cellphones, crying, chanting, waving Cuban flags. The world saw the faces of a determined and revolutionary Cuba, nurtured, educated and healthy because of their socialist revolution.

Fidel’s ashes rested overnight in Santa Clara’s Che Guevara Memorial with the remains of Che and his internationalist comrades. In the last days of December 1958, Che’s Rebel Army column had broken the back of the dictatorship’s resistance by derailing a train full of arms and reinforcements in Santa Clara. Batista then fled to the Dominican Republic. 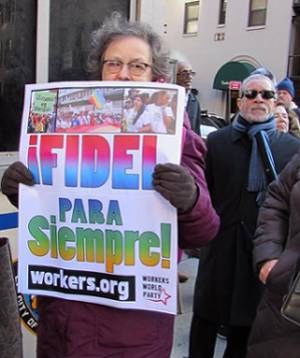 Fidel’s ashes were put to rest in Santiago. During an evening public gathering, Ulises Guilarte de Nacimiento, secretary general of the Cuban Workers’ Federation, pointed out that with the triumph of Jan. 1, 1959, the working class had become essential to the construction of the new social project.

“Fidel always encouraged consultation with the labor movement regarding the most important tasks of the Revolution,” he added, concluding that, thanks to Fidel, Cuba is a dignified, independent, anti-imperialist country that practices solidarity. Fidel would live on in the hearts of all Cuban workers.

The National Secretary of the Federation of Cuban Women, Teresa Amarelle, stated, “We Cuban women are the Revolution. Raúl, you can count on Cuban women.”

Miguel Barnet, president of the National Union of Writers and Artists of Cuba, noted, “Fidel articulated in a harmonious way the thinking of Bolívar, Martí and Marx, which made the Cuban Revolution unique in the world.”

Two young women — Jennifer Bello, president of the Federation of University Students, and Sucelys Morfa, secretary of the Young Communist League — spoke right before Cuban President Raúl Castro. Granma.cu quoted Bello: “Cuba is ours to take care of and defend. Each university classroom will be our Moncada.”

Then Raúl Castro closed the last public event. In a speech on “Fidel’s enduring lesson is that, yes, it is possible,” he reviewed many accomplishments of the Cuban Revolution that would have seemed impossible, including defeating apartheid in Southern Africa. He then summarized:

“Fidel’s enduring lesson is that, yes, it is possible, that humans are able to overcome the harshest conditions as long as their willingness to triumph does not falter, they accurately assess every situation, and do not renounce their just and noble principles.”
He added that Fidel, “following the first disastrous battle at Alegría de Pío — which the day after tomorrow will celebrate its 60th anniversary — never lost faith in victory, and 13 days later, already in the mountains of the Sierra Maestra … with just seven rifles and a fistful of combatants, stated: ‘Now we have won the war!’ [Applause and shouts of “Fidel, Fidel! That’s Fidel!”]
“This is the undefeated Fidel that brings us together through his example and demonstrates that, yes, it was possible, yes, it is possible, and, yes, it will be possible! [Applause and shouts of “Yes, we can!”] Yes, it will be possible to overcome any obstacle, threat or disturbance in our resolute effort to build socialism in Cuba, or in other words guarantee the independence and sovereignty of the homeland!”

Fidel’s final resting place is in Santiago de Cuba’s Santa Ifigenia Cemetery. Mariana Grajales is buried there. She and her family served in the Cuban wars of independence and against slavery in the late 1800s. Her son, Antonio Maceo, known in Cuba as the Bronze Titan, was killed in battle Dec. 7, 1896. A 52-foot-tall statue of him on a rearing horse dominates the Santiago plaza where the final public event was held.

Nearby are the Mausoleum of National Hero José Martí and Fidel’s compañeros in the struggle at Moncada, the Granma, the Rebel Army and from clandestine campaigns and internationalist missions.

It was through the socialist Cuban Revolution, led by Fidel Castro, that the struggle for liberation, independence and sovereignty, begun more than a century ago, was finally achieved.