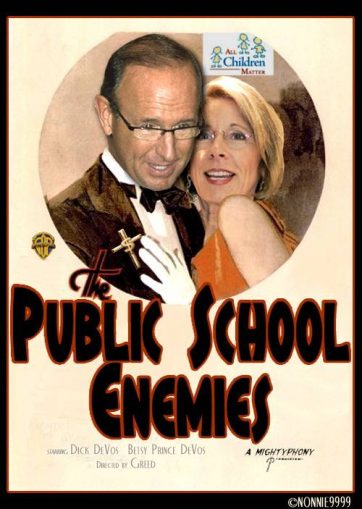 Trump’s naming Betsy DeVos to be secretary of education has been touted by some so-called analysts as proof that the new administration is attempting to balance its earlier appointments of ultra-right figures with a “moderate” or less offensive “establishment” choice.

The truth is that all such statements are a smoke screen devised to hide from the general public the poisonous world of big-business politics.

Betsy DeVos is the daughter of a billionaire. She is married to a billionaire. Most recently she was the chairperson of the Michigan Republican Party. Through her career, she has been most active trying to privatize and destroy public education through charter schools and vouchers that directly support private schools.

DeVos and her spouse played a role in getting Michigan’s charter school law passed in 1993. Ever since, they have worked to protect charters from additional regulation. When Michigan lawmakers this year were considering a measure that would have added oversight of charter schools in Detroit, members of the DeVos family poured $1.45 million into legislators’ campaign coffers — an average of $29,600 a day for seven weeks. Oversight was excluded from the final legislation.

DeVos was one of the main architects of Detroit’s charter school system, which education activist Douglas N. Harris, a professor of economics at Tulane University and a nonresident senior fellow at the Brookings Institution, called the “biggest school reform disaster in the country.” (New York Times op-ed, Nov. 25)

But DeVos’s real goal is to promote, on a national basis, school vouchers like those already in place in some states, including Indiana and Wisconsin. Vouchers directly transfer money from the public schools to private schools, many of them religious.

“Charter schools take a while to start up and get operating,” DeVos told the Philanthropy Roundtable in Spring 2013. “Meanwhile, there are very good non-public schools, hanging on by a shoestring, that can begin taking students today.”

Right-wing politics has been the main beneficiary, not only of Betsy DeVos herself, but most of her immediate family. Her spouse, Dick DeVos, is the heir and CEO of Amway Corp., which has been called a “Multi-Billion-Dollar Scam.” (cracked.com, May 18, 2015) Estimated to be worth about $5.5 billion, Amway instructs its employees not to mention its name — perhaps because it has so often been sued for being a giant pyramid scheme. Based in Michigan, it currently does 90 percent of its business outside the United States.

Erik Prince, DeVos’ brother, founded the infamous Blackwater Worldwide mercenary organization with his own money. Thanks to over $2 billion in federal contracts, Blackwater became one of the premier contractors for world imperialism. It has committed war crimes around the world, including Baghdad’s Nisour Square massacre of 17 Iraqi civilians and wounding of 20 more in 2007. Although three guards were eventually convicted of manslaughter and murder, Blackwater and its founder never faced any charges.

Betsy DeVos’ father Edgar Prince became a billionaire by owning a large auto parts manufacturing company in Holland, Mich. He and spouse Elsa Prince Broekhuizen were notorious for pushing creationism in Michigan public schools. In 2008, Broekhuizen donated $450,000 to a California ballot initiative which attempted to outlaw same-sex marriage. In 2004 she was the top individual contributor to the campaign to outlaw same-sex marriage in Michigan.

With a background and “credentials” such as these, there is little doubt that Betsy DeVos will help the Trump administration pursue its reactionary and anti-working class goals.