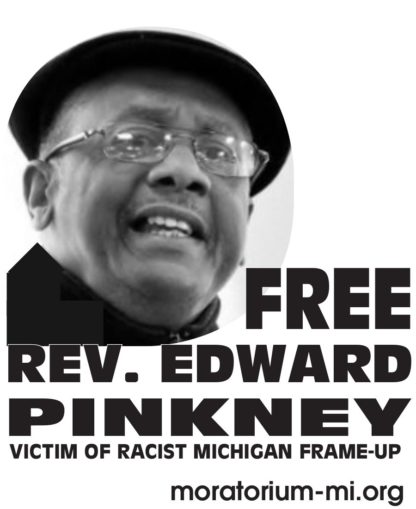 Michigan political prisoner Rev. Edward Pinkney has once again been transferred to another facility. Only two and a half months after being sent from Marquette Branch Prison in far northern Michigan to West Shoreline Correctional Facility in Muskegon Heights, Rev. Pinkney was moved to the adjacent Brooks/Fremont Correctional Facility on Nov. 22 with no prior notice.

Rev. Pinkney, an African-American community leader from Benton Harbor, Mich., has spent almost two years behind bars. He was convicted and sentenced to two to 10 years in prison on Dec. 15, 2014, for allegedly altering dates on a recall petition against Benton Harbor’s then mayor. With absolutely no evidence against him, the all-white jury followed the judge and prosecutor’s advice that “you don’t need evidence to convict Pinkney.” The Michigan Court of Appeals agreed on July 26, finding that Rev. Pinkney’s activist history showed “animosity” to the mayor and was enough to uphold the conviction.

Rev. Pinkney turned 68 on Oct. 27 and received over 250 birthday cards from supporters. He recently related that Minister Louis Farrakhan instructed Nation of Islam supporters in prison with Rev. Pinkney to do all they could to protect him. The Nation’s newspaper The Final Call has had articles supporting Rev. Pinkney. On Nov. 12 hundreds of members of Workers World Party heard a message from Rev. Pinkney to the WWP national conference in New York City. In it he thanked Workers World newspaper for its support and praised the WWP election campaign.

A national call has been issued for supporters to send Rev. Pinkney holiday greeting cards starting Dec. 1 in order to both boost his spirits and show the prison administration that people are watching how he is treated. Mail cards to Rev. Edward Pinkney #294671, Brooks/Fremont Correctional Facility, 2500 S. Sheridan Drive, Muskegon Heights, MI 49444.