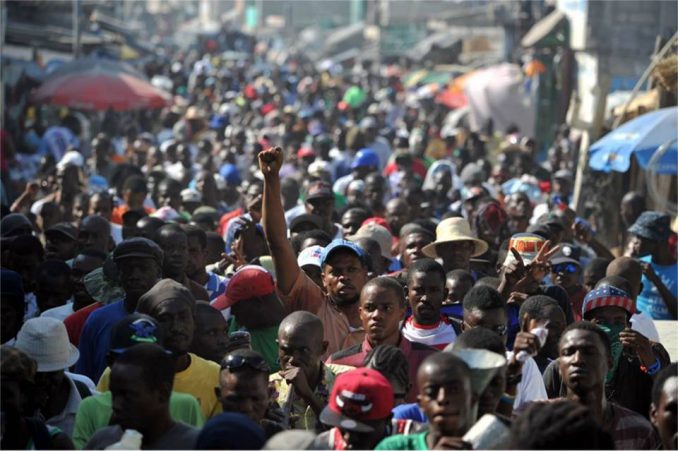 Demonstrators march during a protest in Port-au-Prince.

The Haitian presidential election was held on Nov. 20 in such a serene fashion that the country’s ruling class, with the blessings of their international “observers,” decided to count the vote. Candidates for the Senate and Chamber of Deputies were also on the ballot.

Close to midnight on Nov. 28, the Provisional Electoral Council (CEP) announced the election results: that Jovenel Moise had won with 55 percent of votes cast. Moise, who is from the PHTK (Party of Bald-Headed Haitians), had the most support among the Haitian and international bourgeoisie. The PHTK was founded by Michel Martelly, who was imposed as president in 2010 by then U.S. Secretary of State Hillary Clinton.

While the rampant manipulation of ballots that caused elections in October 2015 to be rejected did not occur, some ballots in the southwest of the country could not be delivered, even by helicopter, due to flooding and bad weather. In the capital city of Port-au-Prince, voters faced electrical outages, incomplete voter rolls and voting sites that were moved at the last minute, according to a complaint made to the CEP by Fanmi Lavalas.

Leading up to the election, Fanmi Lavalas held marches called “caravans of dignity” throughout the country. They demanded a fair and free election, one in which everyone could vote and where every vote would be counted. Some of the marchers in southwest Haiti, which was devastated by Hurricane Matthew, also brought food and basic necessities, like beds and sheets.

During the week of Nov. 21, some marchers were attacked by cops firing tear gas because they didn’t want Fanmi Lavalas showing its strong popular support. All these marches were “illegal,” stated the minister of the interior, because the CEP had banned demonstrations until after the election results were announced.

The overall voter turnout was very low at 23 percent. Some progressive Haitian political tendencies, like Haïti-Liberté and Batay Ouvriye, explained the boycott as a rejection of elections as part of the solution to Haiti’s desperate problems. As Haïti-Liberté put it, the people are “not thirsty for elections but for a social transformation.” (Nov. 23-29)