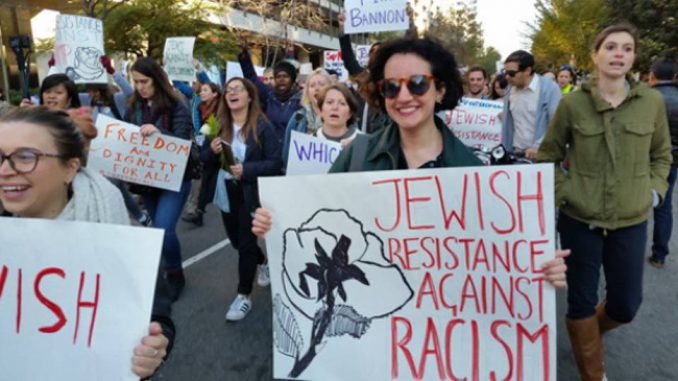 If Not Now, an anti-occupation Jewish group, marches on Trump transition headquarters in Washington, D.C., to protest anti-Semitism.

Late in the election campaign, as Donald Trump hammered home his vile attacks on people of color, immigrants, Muslims, women; as he beefed up support among the worst racist elements including the Ku Klux Klan, white militias and Nazis, he also openly appealed to anti-Jewish forces.

Nothing is now more urgent than beating back these racist attacks. All must unite in solidarity with the most oppressed — Black, Latinx and other people of color, Muslims, undocumented immigrants.

What solidarity means for white people, including Jews, is following the leadership of oppressed people, standing and marching and fighting with them. It means political and physical anti-racist defense, on the streets, in the schools and workplaces and, if necessary, on the highways and railroad tracks to block deportations.

The massive outpouring of anti-Trump outrage and resistance since election night shows that an epochal struggle has begun.

Led by Black, Brown and other oppressed people, it will draw more and more into the battle. Unity must and will be this struggle’s central characteristic.

With anti-Jewish acts also taking place after the election, understanding the history of anti-Semitism and taking it on will help build this united struggle. In Philadelphia, windows of Jewish-owned shops were smashed and spray-painted swastikas were superimposed over Stars of David. Jewish students at several colleges reported waking up to find swastikas painted on their dorm room doors.

Trump gave the green light for such acts in the closing days of his campaign, railing against “the international banking conspiracy,” a classic anti-Semitic code phrase.

His final TV ad was a brazen appeal to anti-Semitism. In voiceover, Trump called out an enemy that has “stripped our country of its wealth.” Images of piles of money were interspersed with photos of George Soros, Janet Yellen and Lloyd Blankfein. Each is Jewish.

Soros is a billionaire investor. Yellen is the head of the Federal Reserve System. Blankfein is CEO of Goldman Sachs. They are indeed the working class’s enemy — but as bourgeois figures, not because they’re Jewish.

The ad was a message to the vilest elements who had risen to the surface in Trump’s campaign. Rally round Trump, the ad said. He’s with you, against Black people, Latinx, Muslims — and, just so it’s clear, he’s also with you against “the Jews.”

Then, days after the election, Trump announced that his campaign chair Steve Bannon would serve as “chief strategist” in the White House. Bannon has a documented record of overt racism, misogyny and anti-Semitism, both personally and at the ultrareactionary Breitbart News.

Media Matters, which monitors right-wing misinformation online, calls Bannon “a white nationalist who hates Jews.” He can be expected to serve Trump in the way Joseph Goebbels, minister of propaganda in Nazi Germany, served Hitler.

Facts will help arm the movement against attempts at division.

Jewish people do not control worldwide banking and finance capital. Jews do not make up anywhere near the majority of owners, shareholders or top officers of most banks. Yes, there are Jewish bankers, just as there are Jewish people in many other spheres. But they do not run the capitalist show.

There are not many Jewish people, period. In the U.S., Jews make up 2.5 percent to 3 percent of the population. The proportion of the world’s people who are Jewish is only 0.2 percent.

For so few to hold as much power as Trump and the anti-Semites claim, Jews would have to have superpowers. They don’t. The caricature of a hook-nosed, sneering Jewish puppeteer manipulating businesses and governments is classic anti-Semitic propaganda.

In reality, for much of history, most Jewish people were impoverished, persecuted and oppressed.

In the late 1800s and early 1900s, a series of horrific pogroms — murderous riots against Jewish communities — swept through the czarist empire of Russia, Poland, Lithuania, Ukraine and neighboring countries. Sponsored by those governments and the ruling class as part of the effort to tamp down growing unrest by the starving masses, the pogroms killed thousands of people. In the first two decades of the 20th century, waves of European Jews fled to the United States.

A hundred years later, in the small Jewish population in the U.S. there certainly remain Jewish workers — bus drivers, teachers, nurses and retail, factory, office and other workers. But others are comfortably middle class. Some are part of the bourgeois ruling class.

Many Jews have taken part in struggles for social change. Some gave their all, like Andrew Goodman and Michael Schwerner, who were murdered alongside African-American James Chaney by the Klan in Mississippi in 1964 for registering Black people to vote. But among U.S. Jews there have also been errors, offenses and failures of solidarity.

The U.S. Jewish population is mostly white and comes to the struggle of the workers and oppressed with all the racism, backwardness, ignorance, privilege and insensitivity of white people in this country. Additionally and tragically for the goal of solidarity, Zionist ideology has maintained a decades-long stranglehold on the consciousness of most U.S. Jews.

The good news is that this is finally changing, at least among the younger generation. The Boycott, Divestment and Sanctions movement, and related organizing in solidarity with Palestine, is winning more and more Jewish millennials. As they break with their parents’ support for the racist settler state of Israel, they also become more open to radical ideas in general. They begin to better understand the meaning of and necessity for solidarity with oppressed peoples.

Jewish youth who turn away from Zionism are taking to the streets as activists in solidarity with the struggles of people of color, marching with Black Lives Matter against racist police killings, demonstrating with undocumented immigrants against raids and deportations, and joining with anti-apartheid protesters for the liberation of Palestine.

Some will take it further and join the struggle to overturn capitalism, following the long tradition of Jewish revolutionaries who started with Karl Marx himself.

The Trump campaign’s lie that Jews are responsible for workers’ troubles is a tactic to disrupt unity among the workers, oppressed peoples and progressives at a moment when such unity is vital to build resistance.

Trump himself is a multimillionaire. He and his class — made up overwhelmingly of white, Anglo-Saxon Protestants (WASPs) — are responsible for disappearing jobs, falling wages and impossibly high housing, education and health care costs.

This capitalist class wants to shift the blame. They want to divide the opposition. It’s no surprise that they reach for that trusty old tool — blaming “the Jews.”

Jewish people are not now an oppressed group in the U.S. They do not face institutionalized, systemic or widespread discrimination, violence, bias and worse, as people of color do.

Still, anti-Semitism exists. It never went away. Now it must be directly combatted.

The movement as a whole must build unity. It is vital to have unity against racism, sexism, Islamophobia, immigrant bashing, LGBTQ oppression and also anti-Semitism.

As for Jewish people in this country, many are suddenly terrified, fearing a return to the worst old days of anti-Semitic horrors. For them, the road forward is solidarity with the most oppressed. Defend Muslims, politically and physically. Stand and march and battle shoulder-to-shoulder with Black Lives Matter. Organize immigrant defense squads.

That is the way to fight and win.

The writer is a long-time anti-Zionist, pro-Palestine Jewish communist.