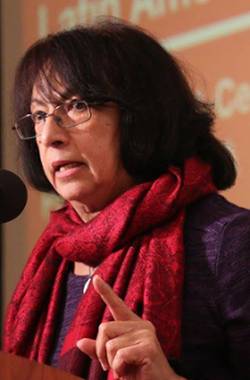 Now we get instant messages, images and video footage from the most distant places on the planet, even beyond. Social media instantly connect us with struggles that otherwise we wouldn’t know, but we can now follow developments live.

That is the power of technology — awesome. We sit down in front of a computer or take a smartphone and have all the information we need right then and there.

But technology has also been used by capitalism to intensify exploitation. We have studied it in “High Tech, Low Pay,” the breakthrough book that our founding comrade Sam Marcy wrote. And also in the book that followed, by comrade Fred Goldstein, “Capitalism at a Dead End.”

Now, the whole world is reacting to an enormous capitalist crisis, created basically by the incredible increase of production of goods and services, due to high tech. Of oil. So much has been produced, but it is beyond the reach of the majority of people. People have become increasingly poor; millions have lost their jobs or work for very low wages.

But the capitalists don’t sell unless they get a profit. And they are hungry for profits, for money, for resources. They have waged wars, occupied countries and territories. Yet, they have not really expanded the markets like in the wars of the past. This in a way shows the weakness of this stage of capitalist decay.

But capitalism is still very violent and bloody. And we cannot lose sight of the fact that although the capitalist class is international, the U.S leads it. It’s Wall Street and the Pentagon in the driver’s seat!

What does this have to do with Latin America? Well, a great deal!

Latin America was tilting the world balance to the left. It was challenging U.S. imperialism and its domination. It was creating a situation that could have possibly brought a destabilization of the capitalist system.

And even though the progressive governments were not socialist and the states were still capitalist, the people’s struggles there, if they had continued to grow in a forward direction, could have continued on the path to overturn the capitalist state. Also, many of these governments instituted policies to benefit their people. These were resources that did not go to the capitalists.

The developments in Latin America were a real threat to the existence of capitalism itself. So, the imperialists, together with the national bourgeoisie and all its allies, both in Latin America and beyond, had to act. They acted not only to preserve capitalism, but also to extract as much wealth as possible to overcome the economic downturn.

The capitalists had to move to crush the progressive movements and install right-wing governments that could carry on programs of austerity, anti-people programs of layoffs, of reduction of social benefits.

Let’s remember the attempted coup against Hugo Chávez in Venezuela in 2002 and the oil sabotage in 2003, the attempts against Evo Morales in Bolivia in 2008 and Rafael Correa in Ecuador in 2010. Then the coup that ousted Manuel Zelaya in Honduras in 2009 and Fernando Lugo in Paraguay in 2012. And recently, the election of Mauricio Macri in Argentina and the illegal impeachment of Dilma Rousseff in Brazil to put right-wing Michel Temer in power.

Now, many of these right-wing governments have started to enact laws to transfer land and natural resources to private companies and to transnational corporations. In Brazil, for example, just yesterday Congress passed a law giving priority to transnational companies in the exploitation of the very rich oil field of the Presal. That is privatization of Petrobras.

They have also unleashed a violent campaign against the progressive movements in those countries. Repression, harassment, arrests and even assassination of social leaders, against the peasants and Indigenous in Colombia, in Honduras — Berta Cáceres ¡presente! — in Argentina, in Mexico. Recently there was an armed attack against a school of the Landless Movement in Brazil. Fora [Out] Temer!

Of course, we have to include the ongoing campaign to destroy the Bolivarian Revolution in Venezuela and the ongoing criminal blockade against Cuba.

And most recently, the imposition of a fiscal control board in Puerto Rico that will decide everything on the island just to benefit the bondholders on Wall Street. Capitalists are squeezing all they can from their colony.

Stepping up the struggle

In response, there is a new wave of mobilizations, trying to build unity, challenging the right-wing governments and their policies.

But one thing is clear, there is an understanding that the struggle has to step up. It cannot be a fight for reforms, for a change of policies here and there. The struggle is really a war. It is a class war. To survive and win, it must be a fight against the capitalist state. Easy to say, right?

But what is needed? And this applies to the struggle everywhere, including right here in the U.S.

Of course, a constant presence in the streets is crucial; the challenge has to be visible.

But the other aspect, the one that is even harder to carry out, the one that will make possible the final victory, is the increase of ideological clarity — the need for Marxist formulations, education that will hone our revolutionary tools together with “Con el pueblo, todo. Sin el pueblo, nada.” (With the people, everything. Without the people, nothing.)

That is a lesson learned from Hugo Chávez. He was popular and loved by people not only in Venezuela but worldwide. It was not only the programs to benefit the people but his relationship with the people. He talked long hours of history, of the conditions of the country and the world, and people listened for hours because he listened first to the people.

This is something that we need to do. We can have the best political program, but if we fail to listen to the people, to know their concerns, their grievances, their fears, we will never be able to win them over to carry out a truly revolutionary program. We need to win the people over, and it is possible if we first listen. We need to go door to door, be out in front of the workplaces.

Just a brief anecdote to illustrate this. In the recent elections in Puerto Rico there was a “surprising” outcome. Several candidates for governor who did not run under the banner of the major party won thousands of votes. One of them, a woman — who ran as an independent — got almost half as many votes as the elected governor got! How did this happen?

Of course, there are some circumstances in Puerto Rico, like the fiscal control board, the corruption and rejection of the current government, etc. But one of the main reasons was that she had gone to talk with the people directly.

The same thing happened with now Senator-elect Vargas Vidot. He walked all over Puerto Rico, talking with the people, about accessible health care and other issues, learning their needs. And he won overwhelmingly; his organization is an organization called Community Initiative; it is not a party.

It is time now not just to protest; it is time to really challenge the existence of capitalism. The system cannot be reformed; it has to be replaced! The movement cannot be on the defensive; it has to go on the offense! We desperately need socialism!

But to be effective, we cannot go alone. No movement can go alone: We need international solidarity and action and to be with the people, talking and listening to win them over.