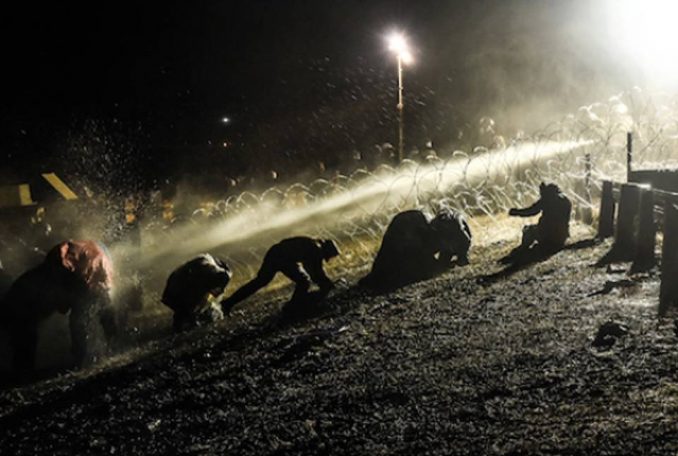 This year’s commemoration of the 47th National Day of Mourning on Nov. 24 in Plymouth, Mass., is dedicated to the heroic #NoDAPL Water Protectors at Standing Rock, N.D., and to the struggle for recognition of Indigenous Peoples’ Day.

The day’s events will once again honor Native political prisoner Leonard Peltier, a fighter for the rights of Indigenous and other oppressed peoples. The ailing 72-year-old hero has been unjustly imprisoned for 40 years, and is now in Florida far from his nation, the Turtle ­Mountain Band in North Dakota. His supporters worldwide are calling for President Obama to grant clemency and free Peltier now.

The so-called “Thanksgiving” holiday starkly recalls the centuries of atrocities committed against Native peoples, first by European colonizers and then by U.S. administrations. Indigenous lands stolen; cultures and languages under siege; bigotry, injustice and genocidal violence aimed at this country’s original inhabitants are the real U.S. history, not the myths.

Workers World is in solidarity with Indigenous nations in their ongoing struggles in the U.S. and throughout the Americas for political, economic and social rights. We recognize the right to self-determination of Indigenous people everywhere and support their efforts for decolonization and sovereignty. We condemn racist discrimination, oppression and corporate exploitation that continue against these communities, resulting in economic devastation and impoverishment.

The U.S. government has broken every treaty ever signed with Native nations in order to steal their lands, displace their peoples and back greedy corporations in search of oil, gas, minerals — and superprofits. We applaud Native peoples worldwide who boldly resist capitalists’ pillaging of the earth with total disregard for the planet and the life on it.

Workers World stands in solidarity with Indigenous peoples worldwide who are fighting back against the capitalists’ escalating destruction of the planet. We assert that their struggles and righteous demands for reparations from corporate polluters for ecological damage must be supported.

The courageous months-long struggle by the Standing Rock Sioux nation to stop the Dakota Access Pipeline’s construction has inspired thousands of people to join with them in solidarity and garnered international support. In addition to destroying sacred land, the DAPL would pollute the Missouri River, affecting the water supply for millions of people. This is a fight for sovereignty, land, water and the lives of future generations.

Three hundred Indigenous nations and their supporters have opposed the building of the DAPL, which is being unlawfully constructed on stolen land without the Standing Rock Sioux Nation’s permission. These brave, unarmed protesters have blocked bulldozers and faced down corporate mercenaries and militarized police who wield pepper spray, rubber bullets and tear gas. Water protectors have been beaten, bitten by attack dogs, arrested, strip-searched, numbered and kept in dog kennels.

Native nations are demanding that the U.S. government honor the 1851 Treaty of Fort Laramie with the Oceti Sakowin (Seven Council Fires of the Great Sioux Nation), which recognized that this land belongs to them. By law, so does the water. The North Dakota police and U.S. National Guard are violating federal treaty rights as they act to protect the interests of oil profiteer Energy Transfer Partners.

Workers World wholeheartedly supports Native water protectors and their allies at Standing Rock. We, along with hundreds of organizations, sent a delegation to their encampment to show our solidarity, and we encourage other groups and individuals to travel there and/or show support in whatever ways they can.

Workers World raises high the banner of solidarity with all Indigenous peoples on this National Day of Mourning. We join with millions of people worldwide in loudly proclaiming, “No DAPL” and “Free Leonard Peltier!”