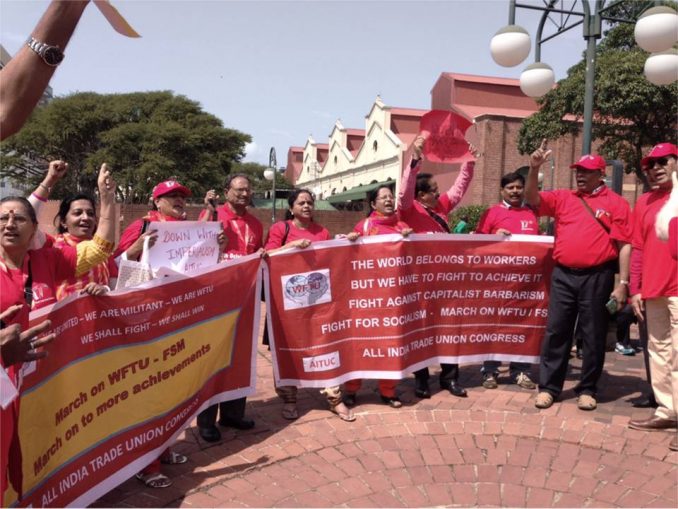 AITUC delegation at the WFTU Congress in Durban, Oct. 8. At left, Amarjeet Kaur.

Amarjeet Kaur is National Secretary of the All India Trade Union Congress. Martha Grevatt interviewed her Oct. 7 during the 17th Congress of the World Federation of Trade Unions, held in Durban, South Africa. They discussed the 180-million-strong general strike of Sept. 2.

Kaur explained that until 1947 AITUC was the only trade union umbrella organization. Another 11 union centers were formed since the 1940s by various political currents — from the Marxist left to social democrats to “the right reactionary religion-based organizations.” The federations led by the previous and current ruling bourgeois parties are the largest, followed by AITUC, which is “the top among the left.” This is the second segment of her interview.

Martha Grevatt: Why were women essential to the success of the strike?

Amarjeet Kaur: Women were essential because they are hard hit. All the social security investment which the government is reducing is hitting women because it is making education, health, drinking water and food items expensive. Good jobs and opportunities are being lost. Women are being engaged only in precarious jobs, where wages are not protected at all, so women’s participation in our strike was immense. They were in the forefront everywhere.

Women could really digest the whole campaign [because] we are the worst oppressed. Once again child labor is increasing in India. There are too many migrations from rural to urban areas. Trafficking is happening. Women are really suffering so they were a very important component to make this strike a success. All of the welfare schemes — there are almost 10 million women working in that area. None of them have worker status. [These women perform necessary social services but are considered “volunteers” and receive no wages, only below-minimum-wage payment as an “honorarium,” and are not protected by labor laws.] So they were out in the streets. Our domestic workers were in the streets. So women were very, very important in making this strike a success.

This strike went beyond the workers. It was appealing not only to our workforce and our targets. We told our workers we have to go to the communities, we have to go to the people. We have to go beyond our boundaries and tell the people the strike is not only for us, it is meant for India, to save its sovereignty and not to sell out our interests to the foreign companies and finance capital. This is how we moved. And that’s why we got so much support.

For women I have a message: They should understand that they and their children are the worst affected with this neoliberal economic market. All humans suffer but they are the worst sufferers so they should be in the forefront of these struggles of class-oriented organizations. The working class needs to take the lead today.

MG: What is the role of the left?

AK: The left political parties came out openly in support of the Sept. 2nd strike. They said, “We support your demands, we support your strike, we will ask our cadres to help you in this strike.” Many even appealed to the local governments of those states which are controlled by political parties other than the [ruling] party so some of those governments did not use their police against the strikers. But where these hostile governments were, there workers had to face the police. They were trying to break the strike but they could not break it.

MG: Do you want to add anything else?

AK: I think a very big problem we are facing today is that new industries are coming up; several of the multinational corporations are coming in and investing money. They are violating the Indian constitution and labor laws. And the governments are siding with them. When workers want to form unions they are sacked [fired], retrenched, suspended. So we were glad to have the solidarity with the unions of those corporations, who have offices in various countries.

For example, there are Japanese, German and U.S. companies in several countries producing a single item. They are threatening to move out of a country if you ask for your rights and the government [echoes them]. So I think it is high time for our solidarity, our closeness among various unions working in different countries, hearing of and sharing our experiences, victories and achievements, the methods and forms of our agitation. That will help us, exchanging those opinions and all the close working of the unions will be very, very important.

I definitely feel that the capitalist world is in a crisis they are failing to contain and they are telling lies that they are doing okay, but it is not happening. They are attacking one country after another for natural resources. That means the armament industry will have more business creating conflicts here and there. They are against the working class and we should see to it that in our respective countries we do not allow warmongers to take over the psychology of the masses. The trade unions once again will have to speak out against conflicts, violence and local wars … and those who are creating terrorist groups and utilizing that situation against their own workers in their own home country as well as creating problems for the workers in other countries.

The working class needs to understand that this decay has increased the challenges but has also given us more openings. Now more and more unions want to be in a fighting mood. Once they are in a fighting mood then they would like to desert the unions who are not fighting. They would like to come to the centers which are fighting. So this is providing us opportunity to strengthen the class-oriented unions and WFTU.