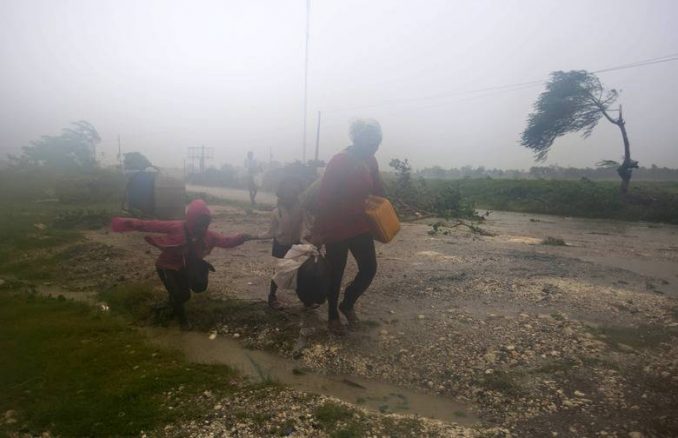 A month after Hurricane Matthew slammed into southwest Haiti with wind speeds of up to 155 miles an hour, much of the electrical grid, roads, houses and food stocks destroyed have not been repaired or replaced.

Some 800,000 people need food desperately, according to UNICEF-Haiti. The hurricane destroyed the homes of hundreds of thousands of subsistence farmers in Grand Anse and Sud, the two worst-hit departments. It also destroyed their food and the seed they need to raise their next crops, along with thousands of fruit trees.

Some 112,000 children are at the greatest risk from hunger because they are already so thin after a three-year drought.

Even these UNICEF figures are probably too low. Local government officials have said that the devastation of roads and tracks leading into the mountainous areas of these departments is so great that they won’t be able to reach some remote communities until the end of November.

One man reportedly spent two days walking out of his isolated village to tell authorities that so many people there had died that they were burning the bodies instead of burying them. (Washington Post, Nov. 3)

The flotilla of U.S. ships with heavy lift helicopters that could have supplied these communities left several weeks ago, after delivering promised supplies.

There are other dangers besides the hunger and destruction left by Matthew. Cholera, brought to Haiti by U.N. troops through careless sanitation, has caused hundreds of deaths in Haiti’s southwest in the past month. The overall total since 2010 has reached 10,000 deaths, with 800,000 sickened.

Haiti’s Interim President, Jocelerme Privert, told the BBC on Nov. 11 that his country was facing a “major food crisis” and worsening levels of malnutrition. He said he “didn’t want to see Haitian people die because of the unavailability of international assistance.”

He explained, “Our projection is that we need between $25 and $30 million dollars to resolve the farming issue. Right now we have $2.5 million.”

The natural impulse for working people and progressives, when we see a tragedy like what Hurricane Matthew and capitalism have done to Haiti, is to give our own personal funds to help our fellow workers.

When Haiti was hit by a devastating earthquake in 2010, half the families in the United States made a donation to help. The American Red Cross collected half a billion dollars to aid Haiti. Out of this huge pile of money, the organization sent a few emergency supplies and built exactly six houses to replace the hundreds of thousands of homes destroyed.

An official of Steelworkers Local 8751, which represents the union of school bus drivers in Boston whose members are 95 percent Haitian and Haitian American, told Workers World that the local is donating $5,000 in union funds. They are looking into how to send the money to Haiti with a small delegation of union members. One bus driver lost five family members in the devastation of the hard-hit city of Jeremie. Some individual members of USW 8751 are raising additional funds.

With a large concentration of Haitian workers in Boston-area hospitals and hotels and an active branch of the progressive Fanmi Lavalas party there, Local 8751 is hoping to put together a union-based coalition to gather and send concrete solidarity to the people of Haiti.