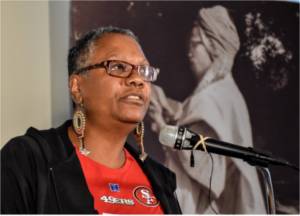 I want to salute all the young people who continue to take to the streets in so many cities once it became official that the racist, misogynist, xenophobic Trump will become the 45th U.S. president.

This massive outpouring in the tens of thousands included high school and college students who walked out of their classes. Tens of thousands of people came out in New York City on Nov. 9. The majority descended on Trump Towers, where 60 were reportedly arrested. Protesters in Oakland, Calif., were teargassed. Thousands came out in Baltimore from a call put out by the People’s Power Assembly.

I live in Jersey City, a thoroughly multinational city that Trump attacked during his campaign for supposedly supporting the attacks on 9/11. Young Muslim students there held a protest. Although small in numbers, this demo was politically important because Jersey City is not known for any major kind of activism. Also this was a heroic act because as we all know Muslim people have come under the most heinous attacks by Trump and his neofascist supporters.

The New York demonstration and others like it speak to the need to build broad international solidarity, which doesn’t pertain just to workers and oppressed living thousands of miles away but also right here in the belly of the beast.

To understand the essence of solidarity is to understand that imperialism — an economic system whose thirst for superprofits based on superexploitation and plunder knows no borders — exists throughout the U.S., not just abroad.

It was this kind of solidarity against white supremacy that our election campaign was stressing before Nov. 8. Now, with Trump’s victory, it is 10 times more necessary.

It is this virulent racism that propelled many of our sisters and brothers who are immigrants, Muslims and other people of color to vote for Hillary Clinton, the neocon militarist and darling of Wall Street, because of their second-class and third-class treatment in this society. We had no argument with them voting for Clinton. We did have a problem with activists and progressive movements using the anti-Trump card as an excuse for voting for Clinton, making our movement more subservient to her ruling-class party.

So now the racists have become more emboldened. Look at Twitter, with all the hideous examples, including the KKK calling for a Trump victory march in North Carolina on Dec. 3 or racists calling for the lynchings of Black students at the University of Pennsylvania.

And what will the Trump victory mean for women with an openly misogynist president giving the green light to even more disgusting objectification of women, along with bigotry against people with disabilities?

The Trump victory has unleashed a growing tidal wave of racism, which is why it is more crucial than ever for all the movements to put aside any political or ideological differences to form a united front to resist and smash this racist onslaught. We have to keep in mind that the police, whose national so-called “union” endorsed Trump, will become even more violent and militarized. It will become even more glaring that the Ku Klux Klan and the police work hand-in-hand as partners in the repressive state apparatus.

So what does real solidarity look like? Is solidarity based on a moral obligation? Some may see it that way. But Workers World Party sees it in a different way, because we are materialists who view every phenomenon based on objective conditions, which are always in motion.

When Karl Marx stated in the 1860s in his monumental work “Capital”: “Labor in the white skin can never be emancipated while labor in the Black skin is branded,” he was using specific terminology rooted in a very specific epoch — that being two social systems, slavery and capitalism, on a collision course that resulted in the U.S. Civil War; that white workers can never be liberated as wage laborers while Black people were used as chattel, that is, slave labor. He was stressing that it was in the class interests of white workers to fight side by side with their African sisters and brothers to bring down slavery, in order to bring about equality when it came to wages and other basic democratic rights during that time.

The violent, abrupt end of Black Reconstruction set back the struggle for basic democratic rights for Black people from the late 1870s until this very day.

The immediate response to the Trump election has been nothing short of phenomenal. There are even serious rumblings of calling a general strike on Jan. 20, along with a counterinauguration that has the potential of being even larger than the great one-day strike on May Day 2006, led by migrant workers in the millions. That should include other low-wage workers, unionized workers, prisoners, youth — in other words, the entire working class — employed, unemployed, part-time and full-time workers.

Part of strengthening the left is to strengthen solidarity with the most oppressed, especially youth of color, who even before the election were the targets of a genocidal police war. They have been shot down in the streets in Charlotte, Baltimore, Milwaukee, Chicago, Los Angeles and elsewhere. They have been threatened with lynching in Beaumont, Texas, and elsewhere for taking a knee against injustice after Colin Kaepernick inspired them to do so. Police dogs were unleashed on them in Standing Rock, N.D.

This police war illustrates that the left must absorb in their bones that a big section of the working class worldwide, including the U.S., is our youth who are being disenfranchised and demonized by the racist capitalist state. If the youth are not defended by the movement, it helps to weaken the entire working class and serves to strengthen the bourgeoisie.

A genuine revolutionary socialist movement cannot move forward if the answer to the question of uniting the working class is to advise all involved to minimize and marginalize the importance of combating racism, the oppression of immigrant workers, of women and of lesbian, gay, bi, transgender and queer people “for the sake of unity.”

Unity and trust within the working class and within our socialist movement can only be accomplished by making the issues of the most oppressed central to our movement.

Let’s seize the time to build class unity, especially with oppressed nations and peoples, to make a reality of the prediction that Marx and Engels made in their groundbreaking book “The Communist Manifesto,” and that Vladimir Lenin expanded in “Imperialism”: that the workers and oppressed united will become the gravediggers of capitalism. On to the Socialist Revolution! Build a Workers World!