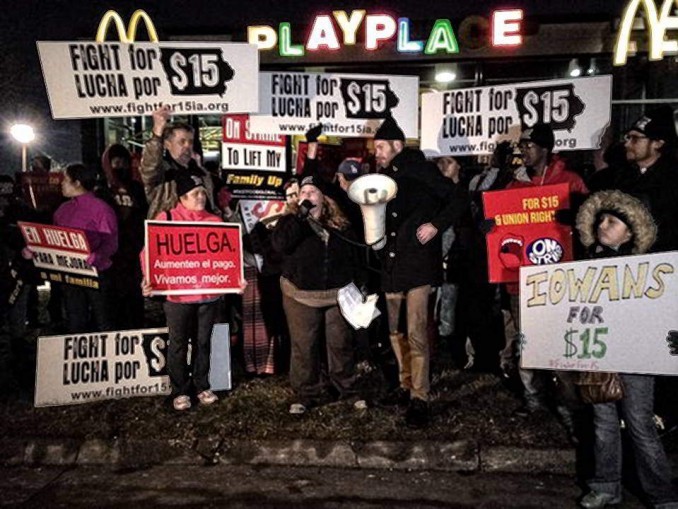 Polk County, Iowa – In reaction to a vote by the Polk County Board of Supervisors for a compromised wage increase that contains anti-worker provisions, Fight for $15 supporters say they will now take the fight to the Statehouse.

After a series of meetings conducted by a county minimum-wage task force, followed by public readings by the Polk County Board of Supervisors, the latter voted for a gradual increase to $10.75 per hour — by 2019. This represents a $3.50 bump from the current $7.25 per hour minimum wage, but fails to increase it to a living wage, which at present is considered to be $15 per hour.

Dozens of Iowa Citizens for Community Improvement (Iowa CCI) activists showed up at each meeting to plead their case. At the first public reading of the ordinance, however, supervisors Angela Connolly and Robert Brownell introduced an amendment to the ordinance to create “a frozen tipped wage at $5/hr.”

“Along with blindsiding the public with an amendment to freeze the tipped wage,” said an Iowa CCI press release, the supervisors “took two steps back” by moving forward with the “youth wage exemption,” where workers ages 14 to 17 would receive only 85 percent of the increased wage.

Iowa CCI organizer Bridget Fagan-Reidburn told WW: “This set off the readings in the wrong direction, and we spent much of our focus on eliminating the exemptions.

“We felt that the voices of everyday people weren’t being heard,” Fagan-Reidburn said, “that they were listening to the restaurant and grocery industries and put priority to their opinions. We were scolded for our passionate public comment and they seemed angry and offended that we were pushing them to do more, but we kept pushing. They even threatened to scrap the entire ordinance.”

With the passing of this ordinance, praised as a “compromise” by Supervisor Connolly and others, the board sold out Iowa workers.

Democratic Party activist Pat Rynard defended the compromise and said the workers fighting for $15 an hour at the last meeting “got out of hand at times, leveling very personal attacks at the supervisors, as well as shouting and yelling at times during the meeting didn’t help anything.”

Contrary to this claim, Fagan-Reidburn told WW that there was little “yelling,” as Rynard claimed in his “Iowa Starting Line” article of Oct. 12. “There was some tension and increased passion at times, especially when early on the supervisors came in and essentially admonished people for $15 per hour, calling us unreasonable.”

Fagan-Reidburn said there were no personal attacks, “just impassioned testimony” and “pushing back on dangerous exemptions to the minimum wage that pit young against old, tipped workers against non-tipped workers and set a bad precedent for the state legislature that convenes in a couple of months.”

As reported by the Des Moines Register on Oct. 12, “The vote makes Polk County the fourth local government in Iowa to raise its minimum wage (Johnson, Linn and Wapello counties already approved wage hikes),” yet none of these constitute a living wage.

A national study conducted by the People’s Action Institute, published last month as “Waiting for the Payoff,” concluded that the living wage for a single adult living in Iowa is $15.10 per hour, reflecting “what is needed to meet basic needs and maintain some ability to deal with emergencies and plan ahead.”

The study also reports that the living wage that a single adult needs “increases to $16.74” for those paying off student loan debt, noting that “Iowa’s minimum wage of $7.25 does not allow working families to make ends meet.”

Fagan-Reidburn said Iowa CCI and Fight for $15 Iowa will work with the community to help ensure that as many cities as possible participate in or improve the countywide ordinance.

“We will push cities to scrap the youth wage and tipped-wage exemptions. During the 2017 legislative session we will continue to push to pass a living wage bill.”