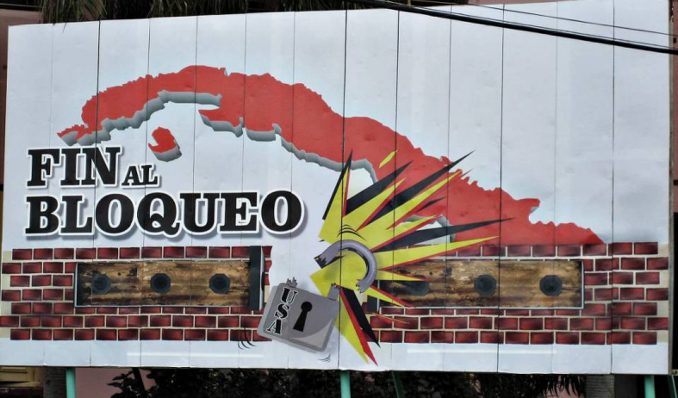 For the 25th time, the world had its say firmly opposing the financial, commercial and economic blockade imposed by the imperialist North American giant on Cuba, its much smaller socialist neighbor in the Caribbean.

More than a vote, it was a demonstration of worldwide popular support for ending the blockade against Cuba. Unlike previous United Nations. General Assembly votes, on Oct. 26 not even Washington said “No.” In a first, the U.S. and Israel abstained from voting, making the total 191 to 0. In 2015 the vote was 191 to 2.

Nineteen other representatives spoke before the U.S. and Cuban spokespeople. Others explained their votes afterward, including in an hourlong session following the lunch break.

Among those speaking were representatives from Niger, representing the U.N.’s Africa Group; the Association of Southeast Asian Nations; the large countries of Russia, the People’s Republic of China and India; the Pacific Archipelago Tonga; the Community of Latin American and Caribbean States; and Caricom. The Non-Aligned Movement recognized and complimented positive U.S. diplomatic steps, but insisted the blockade of Cuba must end.

The Bolivian representative reminded the audience that Cuba was the only non-African country to help fight for African liberation, that Cuba shares the little they have and asks for nothing, and that Cuba improves people’s lives with doctors and teachers. He also gave a tribute to the Cuban Revolution and its historic leader Fidel Castro on his 90th birthday.

In addition to Bolivia, representatives of ALBA [the Bolivarian Alliance for the Peoples of Our America] countries — Venezuela, Ecuador, Nicaragua and El Salvador — spoke.

After announcing to applause that the U.S. would not vote against Cuba’s resolution, U.S. Ambassador to the U.N. Samantha Power admitted: “Instead of isolating Cuba, as President Obama has repeatedly said, our policy isolated the United States. Including right here at the United Nations.”

But Power quickly claimed legality for the blockade that had just been denounced in the speeches and in a 174-page Secretary General’s report supporting Cuba’s resolution.

In an example of the new, more nuanced U.S. foreign policy against socialist Cuba, Power, after referring to alleged “human rights” violations in Cuba, said: “Let me be among the first to acknowledge — as our Cuban counterparts often point out — that the United States has work to do in fulfilling these rights for our own citizens. And we know that at times in our history, U.S. leaders and citizens used the pretext of promoting democracy and human rights in the region to justify actions that have left a deep legacy of mistrust.

“We also recognize the areas in which the Cuban government has made significant progress in advancing the welfare of its people, from significantly reducing its child mortality rate, to ensuring that girls have the same access to primary and secondary school as boys.” (usun.state.gov/remarks/7510)

Power gave as a positive example of international cooperation between the U.S. and Cuba the fight to stop the Ebola virus epidemic in West Africa. She spoke of Cuban Dr. Félix Báez Sarría, who contracted Ebola, survived and returned to the Henry Reeve Brigade in Sierra Leone. She pointed out that the brigade takes its name from a Brooklyn, N.Y.-born, 19-year-old, who died fighting alongside Cubans for independence in 1876.

After detailing the human and financial cost of the blockade in great detail  in his introduction to the vote, Cuban Foreign Minister Bruno Rodríguez Parilla spoke concretely about Dr. Sarría and international cooperation.

“However, it should not be kept silent that in the tragic moments of the epidemic of Ebola in West Africa, the deployment of Cuban medical aid was hampered by the refusal of the British Standard Chartered Bank to make transfers between the World Health Organization and the Cuban medical brigades, consisting of Dr. Báez Sarría and others who risked their lives by their direct contact with patients.

“Even under such extreme conditions, it required specific licenses from the Treasury Department. The Uganda branch of this bank had just closed the personal accounts of Cuban health workers in that country and the British subsidiary of Barclays Bank also prevented them from making transfers to Cuba.

“The same occurred regarding the Cuban personnel working in the education sector in other countries. These examples demonstrate the complexity of the real relations between the United States and Cuba, but the rapprochement made this morning is, without doubt, encouraging. With the change of U.S. vote we may ask: Will these practices cease?

“The change in the vote that Ambassador Samantha Power has just announced is a promising sign. We hope it will be reflected in reality.”

Rodríguez ended by thanking all the people and governments, political parties, social movements, parliaments, civil societies, and international and regional organizations that have contributed their voice and vote against the blockade. He extended gratitude to the people of the U.S. for the growing support for ending the blockade.