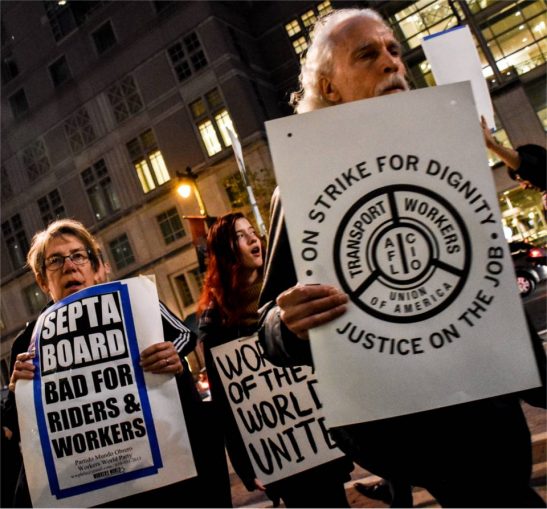 Statement of the Philadelphia branch of Workers World Party:

On Nov. 1, the 4,700 workers in Transit Workers Union Local 234 shut down public transportation in Philadelphia. These courageous bus, train and trolley drivers and cashiers voted to strike two weeks ago, and they’re refusing to work until the board of directors of the Southeastern Pennsylvania Transportation Authority (SEPTA) meets their needs of providing safe working conditions, quality health care and dignifying pensions. (TWU statement, Oct. 24)

A hostile group of capitalists want to make these requests impossible.

Pasquale T. Deon Sr. chairs the SEPTA board of directors. He’s a real estate and casino millionaire who routinely funds right-wing politicians with hundreds of thousands of dollars in donations. (campaignmoney.com) Its other members are largely suburban businessmen and attorneys, all representing the interests of the billionaires, bankers and management. These interests continue to suck out millions in profits from public transportation across the U.S., meanwhile leaving working-class riders with lower quality services, especially in the most exploited and oppressed neighborhoods.

Workers strike for the needs of community

The closing of the subways, trolleys and bus routes will touch the lives of over 400,000 workers and students in the city. Black and Brown workers will be most directly impacted by the suspension of services. SEPTA management, not the workers, are at fault for the strike because they refused to negotiate a fair contract.

While SEPTA can be the butt of jokes in the city, let’s restate that this is not the fault of workers in TWU Local 234.

It’s a failure of management.

It’s a failure of the board of directors. The system they represent exists to leave working-class Philadelphians literally waiting for a train that’s never coming. This system is a failure.

Transit justice is what the workers of TWU Local 234 are fighting for. On Oct. 29, just three days before the strike, the bosses of SEPTA walked out of contract negotiations, refusing to discuss any “noneconomic” issues. (TWU statement, Oct. 29) Meanwhile, SEPTA directors are, essentially, only offering workers a contract of effective pay cuts and givebacks. SEPTA workers are right to deny such an insulting offer.

Stand with the working class and the oppressed

“An injury to one is an injury to all” is the essence of the labor movement. In a time when workers and their unions are on the defensive, this strike is a tremendous push.

A win for SEPTA workers will be a win for all workers, including for nonunion, low-wage workers and workers fighting for $15 Now! — as well as for Philly teachers working without a contract for a fourth straight year.

Now, it’s up to the community of workers as a whole to stand with the workers at SEPTA.

Workers have all of the power in society when we act collectively. SEPTA workers on strike may even have the power to impact the turnout for the Democrat-heavy Philadelphia area during the Nov. 8 election.

Anyone who considers themselves a fighter for justice and equality should support this tremendous struggle.

Workers World Party stands with Local 234 and will do everything it can to support this struggle, as we have done in 1998 and 2009 during previous strikes.