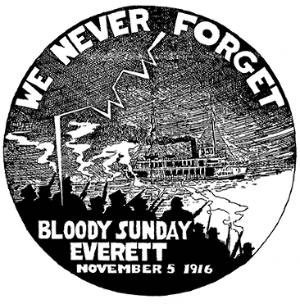 Seattle – On Nov. 5, 1916, sheriff’s deputies and hired strikebreakers fired on striking shingle weavers at the Everett, Wash., port 30 miles north of Seattle. That led to a dozen deaths, many injuries and the arrest of 294 workers.

But the “Everett Massacre,” as it became known, was not just a working-class struggle drowned in blood. Instead it mobilized the workers, leading to an eventual watershed victory for the working class, which overcame great repression and led to the 1919 Seattle General Strike. The Everett struggle set a shining example of solidarity when the workers movement faced the same type of rapacious, uncontrolled capitalism we face today. In that spirit we commemorate this year’s centennial as an important milestone in U.S. labor history.

The workers’ struggle in Everett was led by the Industrial Workers of the World, the Wobblies. The IWW’s “one-big-union” approach united all workers, skilled and unskilled, in a single union, unlike the American Federation of Labor which only organized workers in the skilled trades. The IWW also organized oppressed workers of all nationalities into its ranks in defiance of segregation.

A city of 30,000 people, Everett was a company town, whose workers produced lumber, shingles and shipping. The lumber industry, known as the “lumber kingdom,” dominated the Pacific Northwest in the early 20th century. The Weyerhauser Group exploited more than 30 million acres of timberland, equal to the area of Wisconsin. The undiversified nature of economic life bound all the Everett bosses into a common body, the Everett Commercial Club.

The majority of the mill workers were shingle weavers. Here’s a description of shingle weaving from a 1917 Sunset magazine: “If the automatic carriage feeds the odorous wood 60 times (a minute) into the hungry teeth, 60 times he must reach over, turn the shingle, trim its edge on the gleaming saw in front of him, cut the narrow strip containing the knot hole with two quick movements of his right hand and toss the completed board down the slot to the packers. Sooner or later the weaver would lose a finger or hand. If ‘cedar asthma,’ the shingle weavers’ occupational disease, does not get him, the steel will.”

The shingle weavers union struck against a wage cut in 1915. The strike failed. In 1916, with the price of shingles soaring, the union set May 1 as the deadline for a pay increase. The owners refused. The strike was on!

Throughout the summer the workers held out, despite their picket lines being continually attacked by owners’ thugs. On Aug. 19, only 18 were left on the line. The cops forced them past 70 armed thugs who beat them mercilessly.

The IWW put out a call for solidarity and began a free speech struggle in the streets. The Wobblies had used the tactic effectively in about 20 cities. If enough workers had the courage to speak, get arrested and pack the jails, they won. They had a great victory in 1909 in Spokane, Wash., when 500 got arrested — with no place to hold them.

On Aug. 30, the Everett lumber trust met, stripped city officials of power and put Sheriff Don McRae in charge. The sheriff’s tactics were to brutalize activists and deport them so they couldn’t fill the jails. Two hundred members of the Commercial Club were sworn in as deputies. The whole meeting was blatantly illegal.

In late September a mass meeting of over 2,000 met in Everett and heard IWW, socialists and trade union speakers denounce the beatings, deportations and jailings of IWW and migrant workers. In October over 300 Wobblies were deported. When 41 IWW members arrived for the next street meeting, they were beaten and forced to walk through a violent gauntlet outside the city. After walking 25 miles to Seattle, most went to the hospital.

After a delegation of union and clergy leaders visited the bloody scene the next day, they called a mass free speech meeting for Sunday, Nov. 5. That day, some 250 harvest and lumber workers and miners boarded the steamship Verona in Seattle and another 38 took the passenger ship Calista. As the Verona entered the Everett harbor, thousands of locals welcomed the activists. The Verona workers began singing “Hold the fort for we are coming, union hearts be strong.”

On the dock Sheriff McRae gave a signal. Shots rang out from two covered docks where deputies were waiting, raining thousands of rounds on the Verona. A few Wobblies returned fire, but most were unarmed.

Five workers on deck were killed and 31 wounded. Six more were dead in the water, their bodies washed up later. The Calista backed out, followed shortly by the Verona. When the Verona docked in Seattle, cops took 294 workers to jail. The wounded were treated poorly. Five hundred deputies patrolled Everett that night; the state militia mobilized in Seattle.

Two sheriff’s deputies had been killed and sixteen wounded, most by other deputies. Pinkerton undercover agents identified 74 IWW members on the Verona, all of whom were charged with first degree murder. No deputies were charged.

On Nov. 18, the bodies of Felix Baran, Hugo Gerlot and John Looney were taken to a cemetery, with thousands marching behind the cortege. The next day 5,000 rallied in Seattle to commemorate the dead and condemn the Everett massacre.

On March 5, 1917, the 74 Wobblies were tried in Seattle for the murder of deputy Jefferson Beard; it turned out the other deputy had been shot in the back by a fellow deputy. Thousands attended the trial, though the courtroom only held a hundred.

The Seattle Central Labor Council lined up a fighting lawyer, George Vanderveer, to lead the defense. Vanderveer skillfully reconstructed the scene. The jury was brought to see the Verona docked in the exact position where it was during the Everett massacre.

On May Day, the IWW, socialists and radicals marched in Seattle, stretching 15 blocks. The International Workers Defense League sponsored a token 10-minute strike at 11 a.m. against the threatened hangings of labor activists Tom Mooney and Warren K. Billings. Many Seattle workers took the day off to march to the cemetery where the Everett martyrs were buried.

“As the idea of the general strike grew, so grew the idea, and by the time we were half-way to the cemetery someone raised the red flag in our ranks,” wrote labor activist Minnie Reimer. The workers then marched to the county jail housing many Everett prisoners and sang songs with them.

On May 5 the jury — seeing with their own eyes that the accused could not have shot the sheriff’s deputy — delivered a not guilty verdict. That was the IWW’s greatest historic victory, setting off celebrations in Wobbly halls from coast to coast and inspiring loggers and lumber mill workers to step up organizing.

The Everett mass struggle led to the great Seattle general strike in 1919, which shut down Seattle and Tacoma for a whole week and sent solidarity messages to the Russian Revolution.

The major source for this article is “Revolution in Seattle” by Harvey O’Connor, Chapter 2.