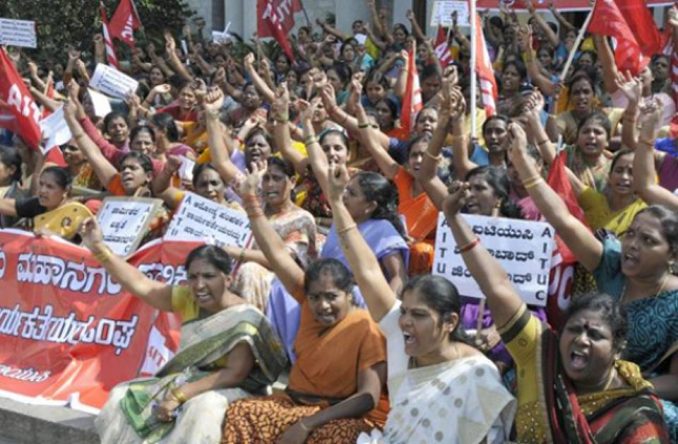 In a show of their strength, members of the All India Trade Union Congress protest in Bangladore, December 2012.

Amarjeet Kaur is National Secretary of the All India Trade Union Congress (AITUC). Martha Grevatt interviewed her Oct. 7 during the 17th Congress of the World Federation of Trade Unions held in Durban, South Africa.

Kaur explained that until 1947 AITUC was the only trade union umbrella organization in India. Another 11 union centers were formed between then, the 1980s and the current decade by various political currents — from the Marxist left to social democrats to  “right-reactionary, religion-based organizations.” The federations led by the previous and current ruling bourgeois parties are the largest, followed by AITUC, which is “the top among the left.”

This is the first segment of the interview.

Martha Grevatt: About how many unions are in AITUC?

Welfare scheme workers are not protected by any labor law because they are told, “You are volunteers and you are not getting wages. You are only being given honorarium because you are providing some services” [such as immunizations of pregnant women and providing meals at schools to poor children]. They are almost 10 million, most of them are women, and they are working for worker status. They think, “We should be paid minimum wages,” which any unskilled worker is given in India.

There are so many workers who are getting jobs for a little while, and then they’re out of jobs. There are those who are seekers of employment forced into menial jobs here and there. But naturally they belong to the particular sectoral unions depending on their skill or semi-skill. There’s no sector left that we have not unionized.

At our last verification, which the government of India conducts, we had claimed 6 million workers, but the government gave us only about 3.8 million. This time, after a gap of 10 years, our claimed membership is now 14 million. We are very sure this time we will be able to secure more than 10 million from government reports.

MG: What’s the history of AITUC?

That influenced the freedom movement leadership also, recognizing these workforces very potential not only to fight for their own rights but their potential to even strengthen the liberation movement to get India free. So with that process we went further ahead.

The efforts were made to have an all-India organization. And the first conference, which was held in Bombay [now Mumbai] was in 1920. There unions of all sections, formal, informal, governmental, non-governmental, all those unions came together and formed this umbrella organization as All India Trade Union Congress.

During the British period, under umbrella of AITUC, several rights of workers and several labor legislations were won. The Indian trade union movement was very well recognized in various phases of the freedom movement and in the organized movement after 1920. The result was when a Constituent Assembly was formed for the kind of constitution India will have after independence from British, that Constituent Assembly took note of the participation of Indian labor movement in the freedom movement.

The result was that several of our rights were recognized in the constitution of the free republic of India: right to associations, equal pay for equal work, maternity benefits to women workers, healthy working conditions, no discrimination at workplace and living wages.

These concepts were taken into the Indian constitution, and this all was due to the labor movement which fought in India. We also achieved several legislations during British period. The Trade Union Act under which we registered our trade unions we achieved in 1926. Then Workplace Compensation Act and several laws. We sought many amendments, and we got [them]. Of these working hour conditions, also during British period, we achieved [limits of] 12 hours; we got eight hours [after independence] in 1948.