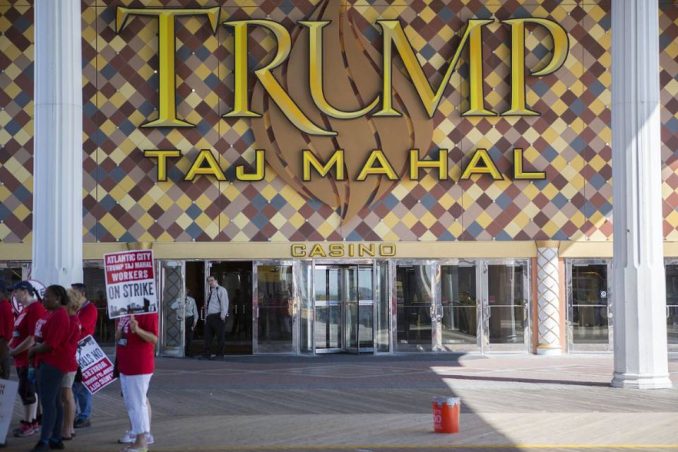 If Donald Trump really wanted to “Make America great again,” he could start with his own employees, who lost millions in retirement savings when Trump Hotels & Casino Resorts declared bankruptcy in 2004. According to the 2004 class action lawsuit they filed, THCR encouraged them to invest their 401(k) savings in shares of THCR stock.

“Honestly. I thought, way back when, the guy was way brighter than we were,” said a former Trump casino worker who chose to remain anonymous. “He was running the company and we were working for him. We thought he was brilliant. When we invested in it, we thought, how could this stock go so low?” In 1996, the first year workers were able to invest in it, shares were priced at $30 each. By 2004, however, the price had plummeted to just $2 a share. When THCR announced on Aug. 10, 2004, that it would enter bankruptcy, stock prices plummeted overnight, grounding out at 36 cents the next morning. For a worker who invested $1,000, that meant a loss of $964. Altogether, Trump workers lost over $2.1 million in retirement savings.

Trump walked away from the bankruptcy unscathed financially and criminally — a judge dismissed the workers’ lawsuit after finding “no illegal actions” by THCR. Meanwhile, as trickster THCR chair, billionaire Trump banked an annual $2 million salary and over $44 million in total compensation. (motherjones.com, Oct. 17)

In early 2014, former Northwestern University football quarterback and team captain Kain Colter posted a photo of himself in designer sunglasses on social media. Within ten minutes, Colter was instructed by an assistant coach to take the photo down, lest the selfie be mistaken for an endorsement of the sunglasses brand. The coach was acting under a Northwestern football regulation that allowed coaches, university officials and even campus police to monitor and restrict players’ social media posts. (espn.com, Oct. 10)

In an “advice memorandum” issued Sept. 22, the National Labor Relations Board called the restrictions on players’ speech “unlawful” on the grounds that Northwestern scholarship football players are employees. But the memorandum is not legally binding. Meanwhile, Northwestern has updated its team handbook to remove the unlawful regulations. According to College Athletes Players Association director Ramogi Huma, “The general counsel specifically putting in writing that they would treat Northwestern players as employees is historic. This is not a small thing.” (cbssports.com, Oct. 11)

Although it remains to be seen how this will affect ongoing efforts by Northwestern football players to form a union, the NLRB’s memorandum is a welcome development for players — especially any who might be considering joining Colin Kaepernick-style protests against racism sweeping football fields across the country. More as this develops.

The Workers Retention Act, passed 47-3 by the New York City Council on Oct. 13, protects the jobs of thousands of food-service workers in the greater metropolitan area. The bill establishes a 90-day retention period after which a new owner or contractor is required to evaluate the workers and, if found satisfactory, to retain them. UNITE HERE Local 100 supported the bill to promote job security for its members who staff corporate cafeterias and dining rooms and provide food services at sports arenas, exhibition halls, performing arts centers and cultural institutions. Similar bills were passed protecting grocery store workers’ jobs last February and building service workers’ jobs in 2002. (unitehere100.org, Oct. 14)

The Freelance Isn’t Free Act was passed unanimously by the NY City Council on Oct. 27 to protect millions of NYC freelance workers against nonpayment. This is the first legislation to be passed nationally that aims to stop wage theft faced by 7 out of 10 freelancers, who now represent 35 percent of the national workforce and contributed $1 trillion to the economy in 2015. According to Freelance Union statistics, freelancers are stiffed on average of $6,000 annually. Clients will now be compelled to use a contract and could face penalties for nonpayment, including double damages, attorney’s fees and civil fees. Seeking to promote “Freelance Isn’t Free” legislation nationally, the union urges unionists and progressives to sign its petition at tinyurl.com/j3aagyx/.