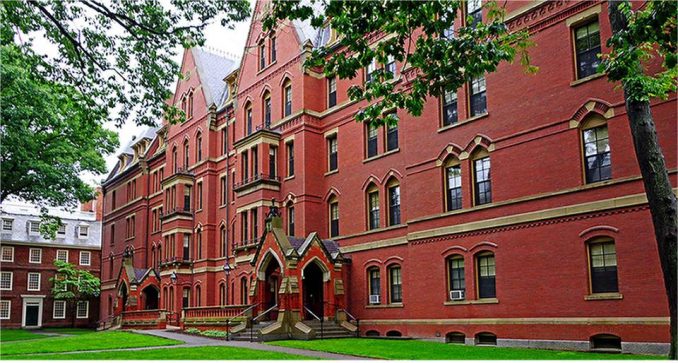 Last year Harvard University’s stash of stocks and bonds was worth $37.6 billion. That’s almost as much as the gross domestic product of the 81 million people in the Democratic Republic of Congo, according to the CIA World Factbook.

Why should Harvard be so rich and people in Congo so poor? That’s the result of imperialism and a capitalist world market that started with the extermination of Indigenous peoples in the Americas and the African Holocaust.

Despite its wealth, Harvard tried to break the strike of its dining hall workers and take away their health benefits.Nearly 800 members of UNITE HERE Local 26, supported by Harvard students and the community, beat them back.

Harvard’s loot, like capitalism itself, according to Karl Marx, “comes dripping from head to foot, from every pore, with blood and dirt.”

The generosity of slavemaster Issac Royall Jr. helped establish Harvard Law School 200 years ago. Royall’s family fled the Caribbean island of Antigua after an attempted slave revolt in 1736 that was crushed by burning 77 Africans to death.

The Royalls arrived in Massachusetts with at least 27 enslaved people. (“On the Battlefield of Merit” by Daniel R. Coquillette and Bruce A. Kimball)  Following protests in 2015, Harvard agreed to change its law school seal, which featured the Royall family crest.

Harvard’s largest benefactor was hedge fund operator John Paulson, who gave $400 million to the school in 2015. The Wall Street Journal declared “foreclosures made John Paulson a billion dollars.” (April 21, 2010) Children of families who lost their homes should rejoice that their misery resulted in Harvard’s School of Engineering and Applied Sciences getting a hefty gift.

Industrial Workers of the World leader Bill Haywood wrote in his autobiography that his father’s ancestors “would probably run to the Puritan bigots or the cavalier pirates. Neither case would give me reason for pride.”

The wealth of so many “proper Bostonians” and the rest of New England “old money” is rooted in blood. It’s well known that the Pilgrims would have starved to death without the corn and other aid given by Native people.

In return the colonists launched extermination campaigns, including the Great Swamp Massacre in 1675 in which hundreds of Native children were slaughtered. This atrocity was glorified in a history of “King Philip’s War” by the Puritan minister Increase Mather, who became Harvard’s president in 1692.

Karl Marx wrote how “those sober virtuosi of Protestantism, the Puritans of New England” set a price of 50 English pounds in 1744 on the scalps of Indigenous women and children.

The United States is the only country in the world that has a holiday called “Thanksgiving” that celebrates genocide. Since 1970 the United American Indians of New England has held a “Day of Mourning” on the same date in Plymouth, Mass., to tell the truth about this holocaust.

Colonial New England’s economy revolved around supplying slave plantations in the Caribbean with food and other supplies. In return the 60 rum distilleries in Massachusetts and 30 in Rhode Island imported molasses. President John Adams didn’t know why people “should blush to confess that molasses was an essential ingredient in American independence.” (“Capitalism & Slavery” by Eric Williams)

Slave trading was important, too. The forerunner of Brown University in Providence — which like Harvard belongs to the “Ivy League” — was started by one of the biggest slave dealers, Nicholas Brown Jr.

It was on behalf of these Yankee pirates that the slave trade was kept from being prohibited for at least 20 years in Article 1, Section 9 of the U.S. Constitution.

The other New England

No wonder abolitionist William Lloyd Garrison called the constitution a “covenant with hell.” Garrison was dragged with a rope by a mob from Boston’s State Street financial district in 1835 and only escaped with his life when the mayor had him arrested.

Abolitionists were part of the other New England. The Black man Crispus Attucks became the first martyr of the U.S. American Revolution. Black soldiers helped repulse the Redcoats on Bunker Hill.

In the years leading up to the Civil War, even some of Boston’s wealthy helped the anti-slavery cause. Railroad magnate John Murray Forbes shipped rifles to abolitionists in Kansas and welcomed John Brown to Boston.

But the Forbes family fortune was based on smuggling opium into China. Another big-time drug pusher was Warren Delano, a grandfather of President Franklin Delano Roosevelt. Harvard’s Fogg Art Museum is named for the China merchant William Haynes Fogg.

The only reason Northern capitalists supported the right of African-American men to vote was to prevent repudiation of the Civil War debt. W.E.B. Du Bois proved this in his classic “Black Reconstruction.”

Yet it was Northern moneymen who helped overthrow Reconstruction, that brief period  of Black freedom from 1865 to 1877. Here’s the historic arc of the capitalist class: While the father-in-law of John D. Rockefeller — the world’s first billionaire — was a conductor on the Underground Railroad, his grandson Nelson Rockefeller was the butcher of Attica.

Harvard was part of this racist reaction, which included the “eugenics” movement that promoted Nazi-like theories of “racial purity.” Tens of thousands of people, mostly young Black women, were sterilized against their will under laws upheld in a notorious 1927 Supreme Court decision written by Harvard graduate Oliver Wendell Holmes Jr.

Lowell gave Harvard students credit for joining the National Guard to try to break the IWW strike of Lawrence, Mass., textile workers in 1912. (“How Harvard Rules” by John Trumpbour) Many of today’s Harvard students would have joined the IWW instead.

Armed with a Harvard Ph.D., Lothrop Stoddard published “The Rising Tide of Color Against White World Supremacy,” an influential racist diatribe during the 1920s.

Harvard’s dining hall workers and their supporters confronted these centuries of racism and male chauvinism when they defeated Harvard’s filthy money.