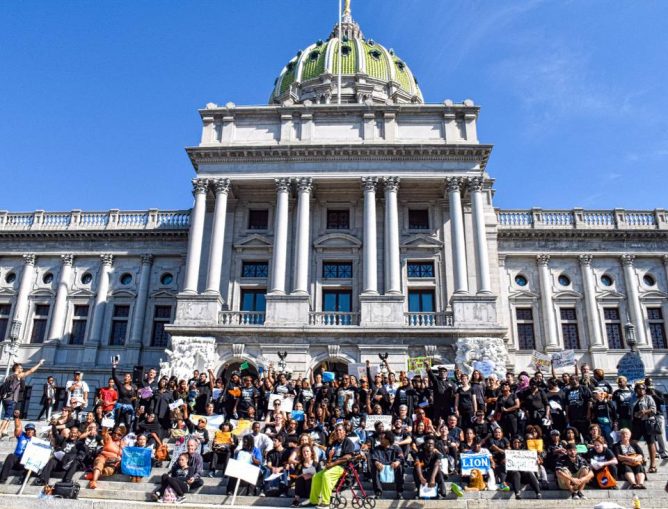 Harrisburg, Pa. – More than three busloads of family, friends and human rights activists from Philadelphia, Pittsburgh and other cities gathered in Pennsylvania’s state capital on Oct. 18 to demand an end to “death by incarceration.”

A rally on the steps of Harrisburg’s Capitol building featured speeches by mothers and sisters of life-without-parole (LWOP) prisoners, people who have lost loved ones to violence, formerly incarcerated people, members of the Coalition to Abolish Death by Incarceration (CADBI) and other groups.

“Denying anyone the right to transformation and redemption is an affront to everyone’s humanity,” said Patricia Vickers of the Human Rights Coalition and CADBI. Representing a group of five Pennsylvania state representatives, Jason Dawkins spoke about House Bill 2135, a bill he has proposed, which would end death by incarceration and allow Pennsylvanians incarcerated for life to apply for parole after 15 years. (­decarceratepa.info)

Cancellation of capacity to be redeemed

Twenty-five countries have declared LWOP to be unconstitutional. Pennsylvania is one of only six U.S. states that deny parole to lifers. Prison rights activists call it the “other death sentence,” or “death by incarceration,” because a life sentence in these states means your entire life.

Harsh sentencing tears communities apart and disproportionately impacts Black and Brown people and especially poor people. More than 5,000 prisoners are serving LWOP sentences in Pennsylvania. More than 65 percent of them are Black and 8.5 percent are Latinx, according to a Decarcerate PA factsheet.

Not coincidently, the Pennsylvania Department of Corrections (DOC) incarcerates the second-highest number of elderly prisoners of any state. In 1980 there were 370 elderly prisoners. There are now more than 8,000 in Pennsylvania’s prisons, though not all are sentenced to LWOP. (PA DOC FY 2011-2012 Cost & Population Report)

To make matters even more inhumane, the DOC refuses to treat almost 7,000 prisoners — including political prisoner Mumia Abu-Jamal — who have hepatitis C, even though medicines exist that would cure the deadly disease.

Felix Rosado, currently serving LWOP at State Correctional Institute Graterford, said: “Death by incarceration is a cancellation of the distinct human capacity to be redeemed. It strips too many people of the opportunity to participate in the healing our communities desperately need.” (Decarcerate PA fact sheet)

More than 480 people in Pennsylvania are serving juvenile LWOP — people convicted to life in prison as juveniles — more than any other state. (Juvenile Law Center) The U.S. is the only country in the world that sentences children to life without the possibility of parole. (­sentencingproject.org)

At a rally on May 8 in Philadelphia, Movita Johnson-Harrell, whose 18-year-old son was shot and killed by two young men, described her decision to ask for mercy for the two. “We must realize that young people frequently make poor choices. … We must also realize that while they make poor choices they also have the capacity to grow and change. It is important to recognize that part of human development is making mistakes, but it is important to give young people the opportunity to redeem themselves. No child should live their entire life behind bars. …

“I stand with the Coalition to Abolish Death By Incarceration,” Johnson-Harrell continued, “because I understand that one bad decision and my son could have been on the other side of the gun. I also understand young people change and can contribute positively to society if given the resources and opportunity.” (decarceratepa.info)

A sentence of death by incarceration at any age exacerbates the disparities of a systematically racist and anti-working class legal structure in the U.S.

Prisons are concentration camps for the poor. Outlawing LWOP would be one step in freeing hundreds of people from the hellholes of this state’s prisons. HB 2135 should be supported, but true justice will only be won when the whole system of mass incarceration is overthrown.